Dejan Bogdanovick is no newcomer to the Victoria International Arts Festival.  Patrons remember his mesmerising performances of the Tchaikovsky and the Wieniawski Violin Concertos a few years ago.  This year he joined forces with equally formidable performer, pianist Gabriele Vianello in a programme of works that had the audience on the edge of their seats.

The recital started with Liszt’s magnificent Duo Concertante sur la Romance de M. Lafont ‘Le Marin’. The work began with an extended fantasia-like introduction.  A semi-operatic dialogue between the violin and piano planted the seed for the work’s main theme: a sweet, almost naïve melody, introduced by the violin above the simplest of piano accompaniments.  Four variations on this theme followed. The first transformed the innocent theme into whimsical salon music.  The second variation offered the pianist a soloistic turn, wrapping finger-twisting runs around the theme, plucked quietly by the violin and echoed by the left hand of the piano.  The third variation transformed the theme into a pastoral idyll whose dreamlike reverie gave way to more up-tempo music.  After a hot-blooded cadenza came the fourth and final variation: a devilish tarantella which led seamlessly into the victorious finale. The rapport between both performers was easeful and so natural one would be forgiven in thinking that no effort went into it at all.  Yet, as audiences know all too well, the secret of a great performance is making it look and sound easy, and this was just like that.

Dohnànyi’s second movement from Ruralia Hungarica op. 32 (Kreisler version) was performed next.   The designation Alla Zingaresca suggests that Dohnányi’s intention was to produce a piece in more traditional ‘Hungarian gypsy’ style, an interpretation that is borne out by the cimbalom imitations in the piano and the floridly rhapsodic violin-writing in this delicious movement, probably the romantic high-point of all Dohnányi’s violin compositions.

The final piece on the programme was the much-loved and demanding Sonata in A Major by Franck.  The delectable first movement consisted of statements of two thematic groups followed by their recapitulation without a clearly defined development sections.  The violin and pianoforte each played different music, which is rarely exchanged.  In contrast, the last movement presented the lovely and familiar theme in canon between the two instruments.  In the dramatic second movement the listeners were regaled with an extended development section between statement and recapitulation.  The music was passionate, even frenzied at the start, but achieved moments of tranquillity that was like an oasis of calm and serenity.  The ravishing, albeit brief, Recitativo-fantasia linked the second movement to the finale, taking the music from D Minor to F sharp.  The first three notes of the Sonata, played by the violin, provided the cell that by extension and variation generated much of the thematic material of the work: the opening theme, the following passionate Allegro, the theme of the Fantasia and the Finale.  Two other ideas appeared, in the second movement and the Fantasia, the latter reappearing in the Finale, with its wholly personal use of Rondo form.

Here is a late nineteenth-century work, no less original than it is effective, its superb melodies and dramatic passion constituting an irresistible challenge to every great virtuoso, one that was enhanced by the superb playing of both Bogdanovich and Vianello.  The piece is cast in a specific cyclical form: its basic ideas, expounded in an initial germ cell, permeate the entire work with their compelling harmonic colours and rhythmic and dynamic passion.  Showing an acute awareness of its vast, arching paragraphs and its unusual proportions, the performers were almost expected to give an outstanding performance of Franck’s masterpiece, sophisticated in the palely-refracted sonorities of its slow movements, and absorbing and controlled in the tempestuous writing in its fast movements.

A work of formidable technical and interpretative demands, this was without any doubt a triumph in all respects. 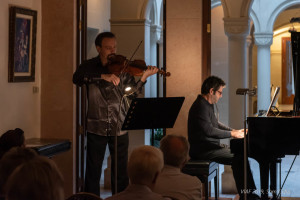 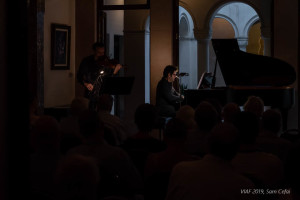 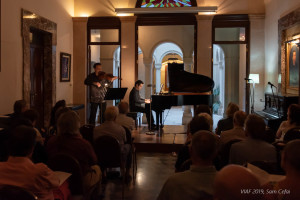