The second concert in the Baroque Series consisted of a highly professional Trio from Slovenia.  Mateja Bajt (recorder/flute), Alessandro Sluga (violoncello), and Luca Ferrini (harpsichord/organ) presented a concert of Venetian Baroque that was a great pleasure to listen to.

Starting with Dario Castello’s Sonata no. 7 a 2, the performers immediately showed authority and expertise in the way they tackled this very demanding work.  This Sonata has a sub-heading ‘in stil moderno’, and Castello means these words exactly as we understand them today, with their connotation of something new and uncompromising.  As evidenced from the evening’s performance ‘stil moderno’ referred not just to the virtuoso wind writing on almost every page but also the mercurial, even unpredictable alternations of tempo and mood.  Mateja produced a most mellow and flowing tone on the recorder to the extent that in the lower register one could be forgiven to believe she was actually playing a flute!  This was once more the case with the second work on the programme, namely, Benedetto Marcello’s Sonata in F Major op. 2 no. 12.

Antonio Lotti was an Italian composer of late baroque music.  Originally for flute, viola da gamba, and continuo, the beautiful texture of the viola da gamba transcribes admirably to the violinoncello, and with few exceptions could also be played with 2 flutes and keyboard. His Sonata in G Major was performed on the flute and cello, together with the ubiquitous continuo.  The flute and cello carried out a vocal-like love duet throughout the entire piece with the harpsichord accompanying in the background.  This was a classic chamber example of the music of organist, singer, and composer Antonio Lotti, whose style bridges the established Baroque and emerging Classical periods.

Next on the programme came two works for solo organ.  Once again, it is a great privilege to note that the Victoria International Arts Festival Foundation was donated a Baroque by Richard Vendome, Fellow of Queen’s College, Oxford.  Prof. Vendome built the organ built and donated it to the Foundation.  It now resides in the concert hall which also houses the beautiful harpsichord and a Yamaha concert grand.  This makes the Aula Mgr G. Farrugia the only fully-equipped one, with regard to instruments, on the islands.  The organ has the most authentic, mellow, and beautiful sound which was admirably suited to the works that were impeccably performed by Luca Ferrini.  These were Baldassare Galuppi’s two movements from his Sonata in D Minor, whose glorious Largo lingered in the ears of the audience well after it had finished, and Giovanni Pescetti’s Sonata in C Major.  The latter is in the traditional three movement paradigm.  The opening movement, Adagio, set a mood of quiet reflection, with the sonority of the pipe organ being brought to the fore through simple yet beautiful harmonic textures which blended seamlessly into each other.  This was followed by a more sprightly movement marked Tempo giusto which was based on crisp rhythmic structures and clean phrasing.  The final Allegro was more busy in spirit and it depended on clear articulation and clarity of contrapuntal networks for its success.  Luca Ferrini did full justice to this lovely work.

Cellist Alessandro Sluga came into his own in Vivaldi’s Sonata VI in Bb Major for violoncello and basso continuo.  Possessing a full-rounded, clear and robust sound, Alessandro was in full control of both the phrasing and the dynamic intensity of the piece.  Typical of the composer’s style, the work isimbued with fire, excitement and risk-taking in matters concerning dynamics and tonal spectrum.  Reminiscent of the concertos for violin, Vivaldi once again proved peerless in terms of melodic inventiveness and rhythmic variety, especially in the faster movement, while the slow movements came across as precious little gems with an inexhaustible palette of endless colour.

The last item on the programme was a work by Giuseppe Tartini, precisely Sonata in Bb Major (La Stagion Bella).  This not only placed Tartini among the greatest composers of the Baroque period but consolidated the stature of the three superb performers playing the work.  Movements differed not only in tempo markings but in mood, temperament, and idea.  In the hands and minds of Mateja Bajt, Alessandro Sluga, and Luca Ferrini, they managed to recreate old structures and make them sound new: long-existing contrapuntal networks were reinvented, melodies were reconfigured, and the basso continuo itself participated in the unfolding drama of the work rather than adheres to its age-long supporting role.

A truly enjoyable evening was had by all! 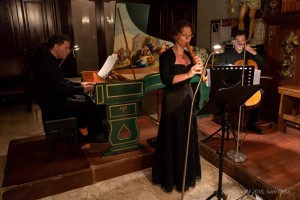 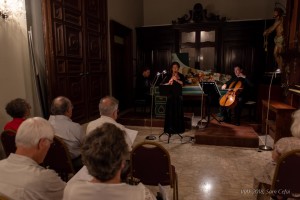 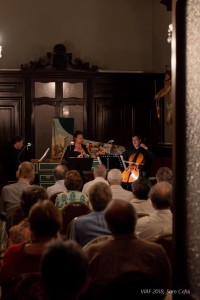 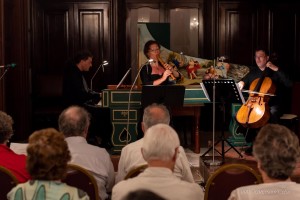 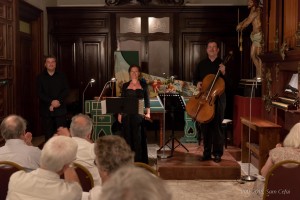 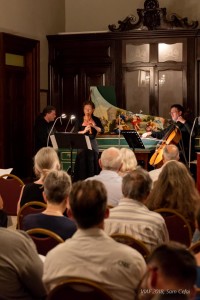 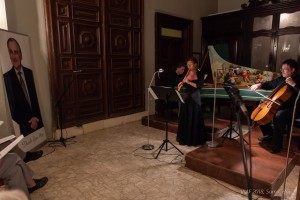