The Marylebone Trio, London, is made up of Jemma Lyndall Bausor (Oboe), Helen James (Clarinet), and Alexandra Louise Davidson (Bassoon). They will be performing a concert of works by Mozart, Schubert, Telemann, Ibert, Beethoven, and more. The concert will be held at the Bishop’s Curia and starts at 8pm.

Marylebone Trio is a classical woodwind Trio formed in 2003 by postgraduate students at the Royal Academy of Music. Since then, the Trio has gained a reputation for concerts that display not only individual skill and excellent ensemble, but also a lively and informative presentation style with an interesting mix of music. Concert performances have included well-received recitals at music Festivals in Deal, Stratford-upon-Avon, and Church Stretton; London venues include Kings Place and the National Portrait Gallery. They have also performed in numerous music clubs and societies around England. Over the past ten years, the Trio has worked hard to expand its collection of music, and now its repertoire ranges from Bach through to the twenty-first century, including original works, transcriptions, and works commissioned by the Trio. Away from the Trio, all three members are busy freelance players working with orchestras around the U.K., including Royal Liverpool Philharmonic, Britten Sinfonia, and the BBC National Orchestra of Wales. West End shows include Miss Saigon, and Les Miserables, and the Trio also records for TV, radio and commercial music. 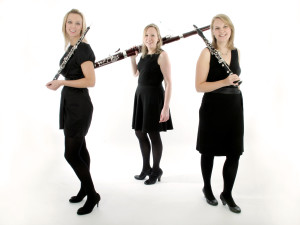