Victoria International Arts Festival is indeed privileged to have hosted two superb string quartets in one week, namely, the Urban Quartet and the formidable Martinů. The latter are not new to the Festival and it is indeed a great honour for the organisers to welcome them every year. Their presence adds more gravitas to the VIAF, one that literally has earned it the moniker “The Gozo Miracle”.

Martinů always attract many patrons and, indeed, St George’s Basilica was packed. That said, this was hardly surprising when one knows that every single concert these past years have been heavily patronised by both locals and foreigners. Martinů presented a programme ranging from Mozart, on to Schulhoff and finally Dvořák.

Mozart’s Divertimento in D major, K. 136 (K.125a) is the first of a group of works collectively known as the ‘Salzburg’ Symphonies.  These works stand apart from Mozart’s remaining symphonies, in that they are set for strings alone, rather than for the otherwise customary mixed instrumentation including winds.  A further point which separates these compositions from others by Mozart in the symphonic genre, is that they are comprised of just three, rather than four individual movements, each lacking the usual Minuet.  Lastly, the compact three-movement form further distinguishes the ‘Salzburg’ Symphonies from Mozart’s true Divertimentos and Serenades, which were multi-movement creations on a large scale, regularly spanning six movements and sometimes even more.

Divertimento KV136 seems indeed to closely mirror the style of the Italian concertos for strings, which Mozart must certainly have encountered during his several visits to Italy. The work consists of a lively opening Allegro, in simple sonata form; a charming central Andante; and a brilliant concluding Presto.  As performed by the brilliant Martinů, the wonderful inventiveness and virtuosity of the D major Divertimento is, to echo the words of Alfred Einstein “a masterpiece of masterpieces, on the smallest possible scale.”  The interaction between the four members of Martinů, together with the wonderful sonority of their tones, made this performance a memorable one.

The second item on the programme was a work by the lesser-known Erwin Schulhoff (1894 – 1942), a Czech pianist and composer.  The work performed by Martinů was String Quartet no. 1.  This work is cast in four movements, with a Presto con fuoco opening panel that was played with full vigour and rhythmic poise.  Its music is at once catchy in its jaunty, folk-like character.  The ensuing Allegretto con moto e con malinconia grotesca deftly, and humorously, lived up to its marking with a grotesque sort of melancholy.  The third movement, marked Allegro giocoso alla Slavacca, again turned folk-like and also featured some engaging effects, making the violin sound almost like a piccolo.  The Andante molto sostenuto finale, the first truly slow movement, was charmingly gloomy in its colourfully ethereal sound world.  This is truly one of the few early twentieth-century works that can appeal to those with either conservative or adventurous tastes.

Last but not least came Dvořák’s Quartet in F op.96 (‘American’).  Here, the Martinů scaled the heights that audiences accustomed to them at VIAF are now led to expect.  Poignant and profound, nostalgic yet fresh, this was vintage Dvořák, with all the attendant plaintive and dark tones in the typical modal key relationships.  Such wonderful timing there was with the barely noticeable rubato on the leaning note in the slow movement – it was the stuff of legend.

The sonata form first movement opened with violin trills and a lyrical, if poignant, viola solo (such a warm, seductive sound came out of Zbynek Padourek’s viola), which soon reappeared in the violin (Lubomir Hávlak).  At one time or another, each member of the ensemble, including the robust tones of Libor Kanka (second violin) and the gorgeous ones of Jitka Vlašánková on the cello, is granted time in the spotlight.  The two main melodies drew on pentatonic scales which are often found in American folk music, although they also are found in the music of other lands.  The profoundly warm and evocative second movement offered a tearful central theme, first heard in the first violin, although soon reappearing in the violoncello.  The movement’s central section is more impassioned than its opening, albeit closing gently, much as it had begun. This was superbly rendered.

The most particular trace of the Quartet’s rural, American origin, however, is birdsong.  The third movement, Scherzo, featured the song of the Scarlet Tanager, a bird that Dvořák heard and transcribed while hiking the countryside.  After an initial statement of a sprightly, rustic theme, the first violin sang the birdsong high in the treble range.  The instantaneous suggestion of dance, of the outdoors, and the piercing simplicity of nature’s own music evoked by the Martinů‘s playing, defined a pure moment of folk music as high art.  For this movement, Dvořák opts for light and danceable dotted rhythms, as reminiscent of his own Bohemian folk music as that of the United States.  Here the usual contrasting theme of the central section is instead a slower, more-reflective treatment of the first scherzo theme.  Dvořák’s final movement was delivered as a lively and exuberant piece, especially for the first violin.  For contrast, there is an almost hymn-like tune that appears midway through the movement.  However, Dvořák and the Martinů brought the movement full circle with a resumption of the exuberant theme from its opening section, and the work concludes with energy.

A prolonged and extremely fervent applause greeted the final notes of this wonderful quartet. A truly stunning performance by the Martinů once more! 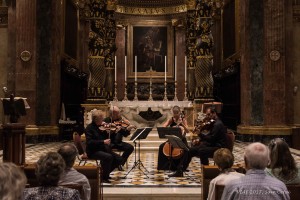 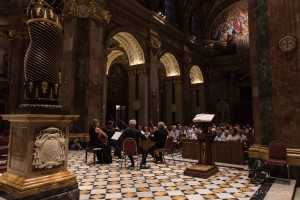 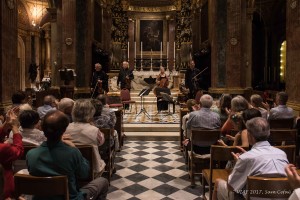 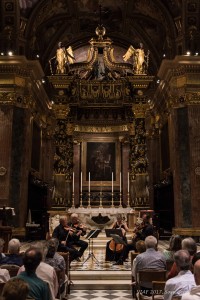 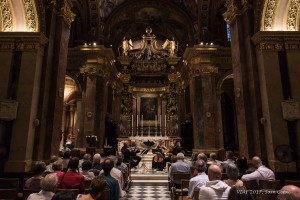 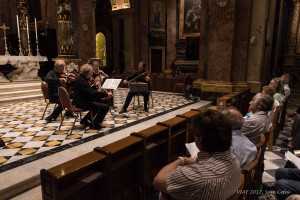