Djordje Gajic ranks among the finest of virtuoso accordionists. On Friday 8 July he gave a solo recital of both works specifically written for the accordion as well as transcriptions and adaptations.  The concert was held at St Augustine Church and the performance was nothing short of mesmerising.

Starting with the all too famous Toccata and Fugue in D Minor BWV565 by J.S. Bach, the performer’s mastery and assured confidence was immediately in evidence.  Striking the right note (no pun intended!) he set the mood that was exciting and full of expectation in equal measure in the audience.  He tackled the very difficult work with panache, making short shrift of both the articulation, which was crystal clear throughout the evening, as well as the pedal stave in the original – what surely must have been a difficult hurdle to overcome but one that Djordje sailed through with disarming ease.

Next came two very lovely Sonatas by Domenico Scarlatti.  Very pianistic works, these were performed with a lightness of touch and nuanced phrasing.  Mozart’s wonderful Andante in F Major KV616 was then tackled.  Originally written for organ, this early work is built, typically, on a very simple melodic line with wonderful harmonic accompaniment.  Going from the tonic to the dominant, the melody became a bit more ornate, with a steady rhythmic accompaniment on the bass.  Djordje’s performance had all the refinement, quiet sophistication, and elegance one associates with any Mozart work.

The two pieces that followed were both by contemporary composers who are themselves virtuoso accordionists.  These were Viktor Semenov’s Guilder Rose, and Youri Dranga’s Fantasy on a Traditional Theme.  In these two works, Gajic had a glorious opportunity to showcase his dazzling technique, which he did to full effect.  Semenov’s piece started with strange-sounding harmonies. It built up slowly and intensely, cumulatively giving increasingly more emotional weight to the piece.  The tonal colour that the composer managed to absorb in the texture of his work is almost akin to a church organ, together with diapason pedal notes, a quality beautifully brought out by Gajic.  The work alternated between romantic moments and highly technical virtuosic ones.  Dranga’s work exploited the extremely wide range that the accordion is capable of, both from a tonal as well as a dynamic point of view.  Reminiscent of gypsy music, this work was an extremely virtuosic one, showcasing the technical and interpretative abilities of the performer to the full.

The last piece on the programme was Zolotaryov’s brilliant Sonata no. 2, specifically composed for the accordion.  The opening movement is built on a melody in the right hand to repeated quaver rhythms in the left hand.  The writing became increasingly more elaborate as the movement unravelled, with the typical Slav dance music becoming more prominent, one that was interspersed by short cadenzas in between rippling notes.  At one point the melodic interest shifted to the bass, with the right hand providing the rhythmic accompaniment.  The second movement, an Adagio tranquillo molto, was a most atmospheric and poignant movement, which fully brought out the singing qualities of the instrument.  It had an improvisatory feel to it, with most of the sections played ad libitum, cadenza-like, bringing forth a mood of abandonment and deep sorrow.  The third and final movement was an extremely fast one.  Once again, as in the first movement, there was a very strong rhythmic feel that attested to Bohemian dance music.  The final section was marked Vivacissimo and it built up a frenzy of excitement and gaiety, bringing this wonderful piece to a resounding close. 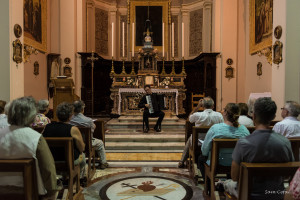