On Tuesday 14 June, virtuoso Slovenian clarinettist Jože Kotar will give a performance with Italian pianist Luca Ferrini at the Aula Mgr G. Farrugia, 8pm. An eclectic programme of works by Stanford, Widor, Vella, Camilleri, Bassi and Parker has been chosen, one that offers a wide panorama of styles and periods.

Jože Kotar was appointed principal clarinettist of the RTV Slovenia Symphony Orchestra in 2007, apart from being a tenured Professor at the Academy of Music, Ljubljana. As a soloist, chamber musician, and member of various chamber ensembles, Jože performs world-wide, and also conducts master classes in both the Clarinet and Chamber Music in various prestigious Academies. He has sat on adjudicating panels of International Competitions, and is a co-founder, member, and Artistic Director of the Slovenian Clarinet Orchestra. He is also a member of the Ariart Wind Quintet and the MD7 Contemporary Music Ensemble. Since 2007, Jože has been the conductor and the Artistic Director of the Trbovlje Workers’ Band.

Luca Ferrini graduated in Pianoforte studies, Harpsichord, Organ, and Composition with distinction from the Music Academies of his native Trieste and also of Udine.  He is equally versatile on the three major keyboard instruments and has in fact performed widely in Europe, Asia, and Central America.  Equally at home performing chamber music, Luca has worked closely with renowned musicians and conductors, performing across a range of styles from the Renaissance to the contemporary.  He has given more than one hundred premiere performances and has twenty CDs to his credit.  He has also made numerous radio recordings across Europe.  He is currently Professor of keyboard studies at the Koper Art Gymnasium and the Ljubljana Academy of Music, Slovenia.

Jože Kotar and Luca Ferrini have been performing as a Duo for more than ten years and their repertoire is vast to include works from the Classical period right up to the contemporary.  They also enjoy performing jazz and live electronics, and many composers have had their works premiered by the Duo.  As attested by this evening’s performance, they enjoy mixing styles in their performances.  With a concert in Dublin five years ago, they initiated a project entitled Music from the Islands, dedicated to music for Clarinet and Pianoforte written by composers who live, work, or come from European islands, including Malta.  Such is the success of this initiative that they are now extending their project to include islands from the Far East and Australia.  As a Duo, Jože and Luca have released two CDs of music by Slovenian composers Vitja Avsec and Pavel Mihelcic, and they have another two CDs projected for later this year. 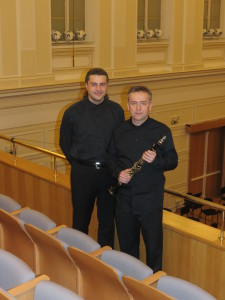