This was this edition’s 5th musical event. It was one of a certain number followed live by an audience seated at the mandatory security distance while other events are streamed on line.

The background to this highly entertaining recital was the beautiful 17th-century Franciscan church which also has wonderful acoustics. The Lang/Tóth duo is a husband-and-wife team from Hungary but in our Islands for many years and resident in Gozo. They are a valued element on the local music scene and also among the most durable of such marital duos.

The choice of works was a very good one because it displayed the easy adaptability of the duo to different idioms and styles. This was no doubt enhanced by the strong, mutually balanced rapport.

Jean-Marie Leclair is one of the better-known late Baroque French composers mostly associated with the violin. The duo performed his Sonata n.1 in G Major for two violins, Op.3. The work came across well with its energetic elegant outer movements flanking a beautiful central movement strongly reeking of a pastorale.

The next work was an interesting and unusual choice. Charles-Auguste de Bériot was known to me for his connection with Vieuxtemps and that brilliant Franco-Belgian school extending to Ysaýe. Yet, I had never heard a work of his performed live with all the warmth in his eclectic Duo Concertante n.1 in G minor, op. 57. It is a very beautiful work and there were lovely lyrical passages in the initial Moderato that smacked of Paganini with some tension building up to fine climax. A reflective Adagio moderato provided a welcome relaxing mood until the Rondo Allegro con spirito was a jolly romp.

Another first live performance for me was the next choice, Profokiev’s Sonata for two violins in C Major, op.56. It is a mature work which projects different moods of an ex-enfant terrible, not out to shock here. It is an exciting sequence from a lovely Andante Cantabile and in subsequent movements a tremendous energy of a certain pungent nature and some harshly rhythmic undertones. The concluding Allegro con brio was followed by the warmest audience reaction of the evening.

That after Corelli’s intricate Sonata op. 5, n.12, “La Follia”, was hardly any less. The work was to an arrangement by Henri Marteau, in which the two performers had a wonderful time exchanging ideas in a solidly built musical rapport. 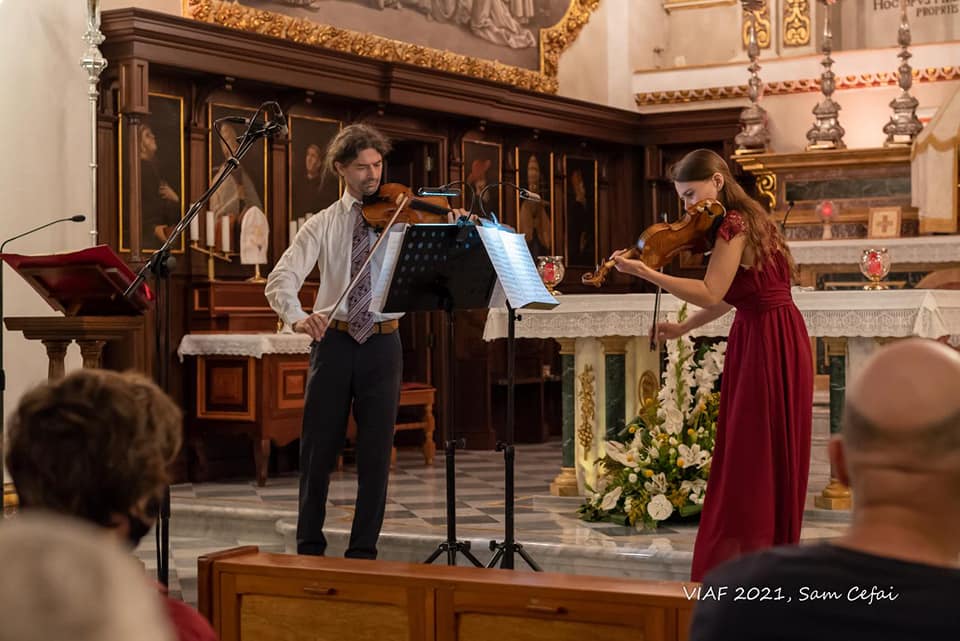