Yesterday evening saw the closing concert of the 16th edition of the Victoria International Arts Festival. Expectations were high – they had been gearing up with steady momentum since the very first concert on Wednesday 12 June and, let’s be honest, with a series of 31 extraordinarily very high-powered concerts what could one expect if not an explosive finish at the end?

And what a finish that was!!! A choral/orchestral concert, featuring the Malta Philharmonic Orchestra, the Laudate Pueri Choir (resident choir at St George’s Basilica), a grand new work in the form of The ‘Hyland’ Mass commissioned by New York philanthropist and patron of the arts, Mr Christopher Hyland, and, above all this, the artistic and musical direction of Joseph Vella who not only conducted the concert but who composed the new work.

Vella’s reputation needs to defending. His is an institutionalized stature and a point of reference on many levels. This new work did nothing but further enhanced his extraordinary creative powers which show no sign of either waning or staling. Anything that Vella writes is new; the style is his, as inimitable as it is recognizable, but the works are never ever imitative or derivative. And, what proves them valid and gives them added authenticity is the fact that no number of performances make them stale; they are always as fresh as new.

The ‘Hyland’ Mass is just one of 4 major works that Vella wrote in under a year, apart from numerous other pieces. It is a work of colossal power not acoustically but conceptually – bringing together diverse elements to cohere in a unified harmonious whole – no wonder the work is subtitled ‘A Prayer for Unity in Diversity’!

Soloists Nathan Schembri Rodgers (treble), Gillian Zammit (soprano), Claire Massa (alto), Cliff Zammit Stevens (tenor) and Nicholas Warden (bass) acquitted themselves admirably in a role that was as challenging as it was exciting. The Laudate Pueri Choir more than rose to the occasion and delivered their parts with accuracy, precision and, above all, beauty of tone. It is a choir that has its own distinctive, idiosyncratic timbre – again, like Vella’s work, the tone of this choir is as recognizable as it is inimitable.  It is special, unique and very beautiful.

Section upon section unfolded seamlessly, uncoiling from complex harmonic structures to simple ones without a hitch. Ultimately, it unravelled as a network of wonderful colour, rhythmic vigour and the most ravishing of melodies.  Hats off to all involved, especially Joseph Vella!

Other works performed during the concert were Vella’s Lament for Strings op. 103 which was composed in memory of the victims of 9/11. A work of ethereal quality it is a paean of praise to God rather than an utterance of despair. There is strong spiritual sentiment that can be deeply religious at moments and this was so evident in this work.

Right at the start, the Laudate Pueri Choir under the direction of George Joseph Frendo sang one of Verdi’s more haunting pieces, namely, the Laudi alla Vergine Maria from his Quattro Pezzi Sacri. This motet is scored for an all-female chorus in four parts. The female section of the Laudate Pueri Choir is, undoubtedly, one of its prized treasures, just stunning. They delivered the piece in devotional style, paying close attention to details of phrasing and dynamics. The end result was one that is well associated with this ensemble – unique.

The concert came to a resounding close with a wonderful anthem which was preceded by a fanfare on the brass. People literally leapt to their feet – such was the wonderful reception the performers received at the end – a fitting tribute to the hard work, expertise and commitment that the organizers (who are also the main performers!!!) are renowned for.

Joseph Vella acknowledged the hard work of his committee towards making this Festival what it is, namely, the most intense, high-powered and longest-running on the islands. He also thanked the church authorities, most importantly, H.L. Bishop Mario Grech and the Archpriest at St George’s Basilica for their support and co-operation.

Mr Christopher Hyland also made his acknowledgements, presenting a triptych and a nineteenth-century Orthodox Cross to Il-Hagar, Heart of Gozo as a fitting tribute to all the hard work that has gone and is still going into the setting up and running of this wonderful museum, the mastermind of Rev. Mgr Joseph Farrugia, who was also present for the evening’s concert, of course, as he was for all the concerts during the Festival.

The evening was under the distinguished patronage of H.L. Mario, Bishop of Gozo, H.E. Ms Gina Abercrombie Winstanley, American Ambassador to Malta, the Mayor of Victoria, Dr Samuel Azzopardi, Mr Alfred Camilleri, Permanent Secretary, Ministry of Finance, representatives of the Rev. Clergy of St George’s Basilica, and a host of other guests, apart from a massive audience that packed the Basilica to the brim.

This Festival brought to an emphatic close a run of 32 concerts which lead into one of Gozo’s major feasts, namely, St George’s Feast in Victoria. What better way to introduce the celebrations of Gozo’s Patron Saint? Since its inception, the Festival‘s main aim has been to give a wide and deep cultural dimension to St George’s Feast, placing it on an enviable podium for it to be admired, appreciated and revered. We hope that we continue to raise the podium higher and higher with more editions of the Victoria International Arts Festival! 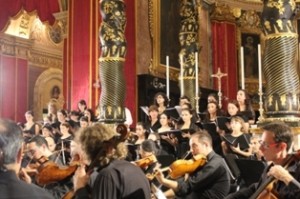 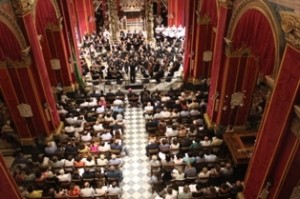 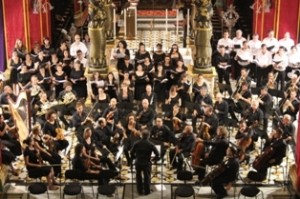 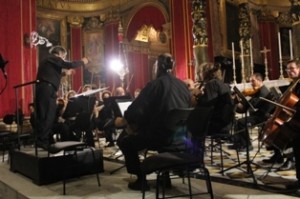 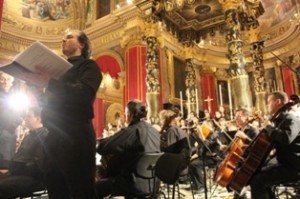 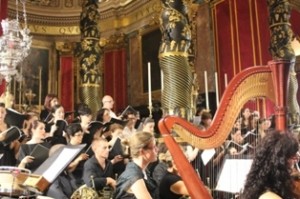 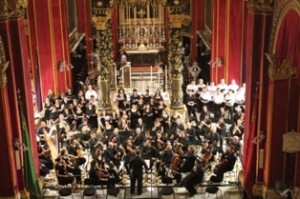 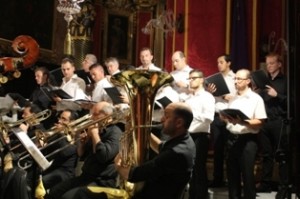 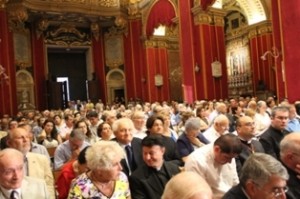