On Sunday 12 June Victoria International Arts Festival presented the first of two Wind Quintets for this year’s 19th edition. This was the Cosmos Wind Ensemble which, although based in Malta (in fact, all the musicians are either the leaders or guest leaders of their respective sections with the Malta Philharmonic Orchestra), hail from different nationalities. Cosmos is comprised of Rebecca Hall (flute), John McDonough (oboe), Godfrey Mifsud (clarinet), Ulrike Buhlmann (bassoon), and José García Gutiérrez (horn).

This was a concert that was characterised by robust yet elegant playing throughout. The acoustics at St Augustine Church help musicians perform and engage with the finest nuances of tonal colour and dynamic intensity – from a truly pianissimo effect to the more assertive, loud moments.  It was such a pleasure to hear the louder sections of the performance maintain a controlled balance and a refined tone. The musicians that make up Cosmos are excellent soloists in their own right, and in their ensemble playing they also showed how well they adapt to chamber music performance. There was understanding and camaraderie by the plenty throughout; it was a performance that was sensitive, confident, yet also controlled and understated.

The concert started with Haydn’s Divertimento no. 1 in Bb Major. There is something definitively stately about a Haydn composition, and this is more evident in his slower movements, which in this work is entitled Chorale St Antoni. This particular second movement is written in a chorale style that looks back to the magnificent chorale pieces of Handel (more than Bach). It was played with dignity and poise, and apart from the impeccable cohesion, there was an immediate rapport that was established from the outset. This was evident from the first notes of the Allegro con spirito which, despite the bouncy rhythms and quick finger-work was well-articulated throughout.  The Menuetto was taken at a brisk pace while the final movement, a Rondo Allegretto, once again displayed balance and unity among the performers.

As Prof. Vella rightly said in his Introduction to the concert, the late Charles Camilleri’s work, Quintet Abongo, was the highlight of the evening in that it was being given its world premiere.  This is one of three new works that are being premiered in this year’s VIAF, and it is a privilege for the organisers to encourage such ground-breaking initiatives.  One can say that in this piece, which is in one movement, the greater weight of responsibility fell on the clarinettist Godfrey Mifsud.  The tone colour that Godfrey managed to coax out of the clarinet was both mellow and seductive, most particularly in the lower ranges.  As a quintet, the work had the Camilleri trademarks of playfulness alternating with more serious moments.  In fact, one could feel that Camilleri, who contributed so much to world music and, particularly, the folk idiom as it is expressed in the Maltese islands, made use of African indigenous rhythms and modes.  This came out in the ensemble playing, with the lower wind instruments supporting the more light-hearted tones of the upper ones. This was a most enjoyable rendering.

Agay’s Five Dances is a work that rests on the various and diverse rhythms of different dance forms, namely, the Polka, Tango, Bolero, Waltz, and Rumba.  Cosmos‘ interpretation of this work was a sprightly one, with the different dance characteristics well-brought out.  Whether it was the contrapuntal exchanges between the Flute and the Oboe, or that between the Clarinet and the Bassoon, or the wide expressive and expansive sound of the Horn, this was one delightful work which, one felt, Cosmos had a lot of fun with.

Ibert’s Three Short Pieces were alas too short, if one could find any fault with this all but perfect work!  One could not but be captivated by the very beautiful dialogue between the Flute and the Clarinet in the Andante, which contrasted with the rippling notes on the horn and bassoon, and the crisp phrasing of the oboe in the first movement, an Allegro. The very beautiful tones of the horn led to an almost cadenza-type section for the Clarinet, to which both the Flute and the Bassoon responded.

The last piece on the programme was Farkas’s Five Ancient Hungarian Dances.  Farkas is a Hungarian composer and his music bears all the paradoxical restraint and exuberance one associates with composers that have a strong does of nationalistic fervour imbuing their music.  The first dance, marked Allegro moderato, is noble and stately in tone and character, most certainly reminiscent of eighteenth-century court music (although Farkas was a twentieth-century composer).  He seems to be emulating the courtly dignity of the Austro-Hungarian Empire in its heyday.  The second movement is telling for the charming exchanges between oboe and bassoon, after which the rhythm becomes more dance-like with steady beats on the bassoon over which the clarinet sings short phrases.  This is followed by a reprise in a minor key of the first phrase.  The Allegro, quasi Scherzo is more light-hearted in spirit and mood while the ensuing Moderato is once again stately in character, one that enabled the ensemble to weave long drawn-out phrases of impeccable beauty in the tone quality.  The final dance is marked Allegro and brings all the instruments together, at times exchanging ideas, at other times providing rhythmic accompaniment.  This last piece is full of fast notes and demands control and an acute attention to co-ordination and balance.

A spontaneous round of applause greeted the last notes of the Farkas work, after which Cosmos regaled the audience with an encore.

Throughout the concert, Rebecca Hall gave charming and informative descriptions of the pieces performed, establishing an easy and natural rapport with a most enthusiastic audience that packed St Augustine Church. 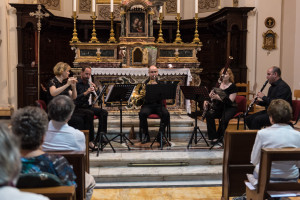 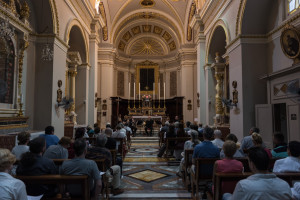 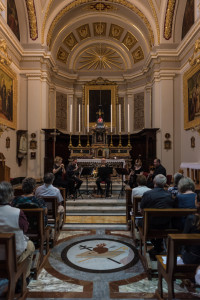 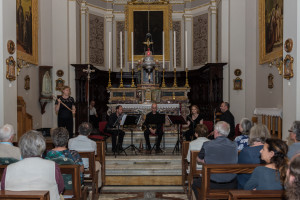