In this year’s Festival programming, one notes that there are 3 distinct pianoforte recitals over five weeks, that are any connoisseur’s delight. The first one is this evening, by Venetian virtuoso Gabriele Vianello.

Here is the programme:

One notes that Gabriele has opted for a most demanding programme, largely of a classical nature for even in the presence of Chopin, the audience will not get what one normally ‘expects’ of Chopin, namely, a few Etudes or Preludes, a Ballade or a Scherzo, a Polonaise or a Mazurka. Instead, it is one of his Sonatas, incidentally, the one containing that most famous of funeral marches in the third movement.

One is also filled with anticipation at the choice of Beethoven’s Sonata for this evening, the magnificent op. 111.

Well, all you have to do is come and listen rather than wonder how it will be like!  It’s all free, as you know!

Gabriele Maria Vianello started his pianoforte studies with his father, Giorgio Vianello, and made his debut in the Grand Hall of the University of Mühlhacker, Germany. He graduated with full honours from the Conservatorio Benedetto Marcello, Venice, in 1984, winning prizes and accolades in his final examinations. While still at the Conservatory, Gabriele also perfected chamber music playing with K. Bogino and P. Vernikov. A performance which set him on a dazzling career was Rachmaninov’s Rhapsody on a Theme by Paganini, in Graz, when only seventeen years of age. He is winner of numerous scholarships, notably, Fondo Respighi, Fondazione Cini and the recipient of a whole array of competitions, including ones in duo formation with Dejan Bogdanovich. He has performed extensively all over Europe, winning rave reviews for his technical prowess and profound interpretation. Apart from being Professor of Pianoforte at the Conservatorio Tartini, Trieste, he is also intensely active performing chamber music with the Gruppo Strumentale Veneto GF Malipiero. Amongst others, he has performed with the chamber ensemble Notte Sinfonica Veneziana to great critical acclaim. He has been the pianist of the Trio Riccati since 2008 and has recorded for numerous labels, namely, Phoenix Classic, Azzurra, Radio Rai, and others. Since 2010, Gabriele has been Artistic Director of the prestigious Associazione ‘Amici della Musica Giorgio Vianello’ at Bassano del Grappa. 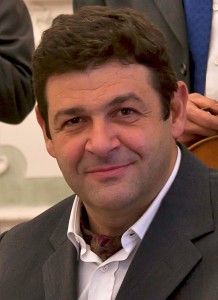