We are all set for this year’s 18th edition of VIAF. The Inaugural Concert, which will be this Wednesday (10 June), starts at 8pm and the venue is St George’s Basilica in the heart of Victoria.

Amongst other works, the concert will consist of 2 world premieres by the Artistic Director of the Festival, Prof. Joseph Vella. For today we will speak about just one of them, namely, ‘Ode to a Resurrected Violin’ op. 137. One may wonder what that title means. Well, elementary, dear patrons. A practically ‘useless’ violin had been lying in Vella’s house for decades. To be precise, the instrument consisted of what Vella calls the “remains of a violin” which had been given to him by a friend. (See photo on the right here.) One fine day, Vella got a brilliant idea (to which he is quite alarmingly partial) and asked his good friend and connoisseur Dr George Debono who, apart from his professional medical expertise engages in the restoration of antique musical instruments as a hobby.

Well, the result of this restoration was so top-notch that it inspired Vella to compose a piece for this practically ‘new’ instrument. Hence, ‘Ode to a Resurrected Violin’ op. 137. The exciting aspect about Wednesday’s premiere performance of this ‘Ode’ is that it will be performed on the restored violin. Pierre Louis Attard, an Ian Tomlin Scholar at Napier University, will be premiering the piece.

Have a look at the photos, courtesy of Dr George Debono, depicting the work in progress on the fragmented violin put together expertly by the restorer.

One could quip: After such process, what deconstruction?? 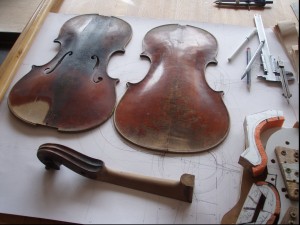 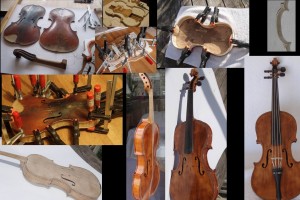 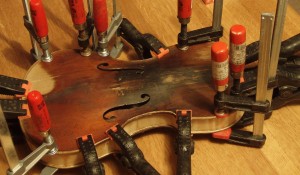