To say that they never disappoint would be an understatement. They always exceed expectation and they do it calmly and without fuss. I am referring to Natascha Chircop and Marco Rivoltini who, as a formidable piano duet, mesmerized the audience on Friday evening.

Chircop-Rivoltini Duet have performed a number of times and each time the audience leaves the concert hall exhilarated by their sheer virtuosity and musicality. The evening’s programme started with Debussy’s demanding Diane Overture. Composed in 1881, the mysteriousness and exotic nature of Debussy’s texture is in evidence throughout. However, there is also an aura that does not quite fit in with the Impressionistic style of this great master of the late nineteenth century. A very late-Romantic trend seeps through the harmonic texture which, while adhering to the famous twelve-tone scale does at times attempt to steer away from it and adopt a more diatonic idiom. Natascha and Marco have a firmly-established rapport musically and this was in evidence throughout their performance. It enabled them to transcend mere playing and dwell in the realm of interpretation; as such, their performance was throughout exciting and vibrant.

Next on the programme was a much-loved work by Rachmaninov, namely, his Six Morceaux op. 11. Whether it was the swaying rhythms which accompanied a lyric melody that incorporated typical swirling figuration to build to a climax in the Barcarolle, or whether it was the dazzling, brilliant and virtuosic playing of the  Scherzo (Allegro) in D major, a work full of wit and rhythmic excitement, or Thème Russe (Andantine cantabile) in b minor, which is actually a set of connected variations on an unidentified theme, the performers glided seamlessly through the various and diverse moods and styles in a most natural and unencumbered way. The fourth movement of this Rachmaninov work is Valse (Tempo di valse) in A major, which is similar in style to the earlier Valse for piano six hands, and is actually a suite of several continuous Waltzes in the traditional Chopinesque style. It came across as both rhythmic and effective. Romance (Andante con anima) in C Minor is a melodious and lyrical Nocturne in a fairly straightforward late Romantic style; it is beautiful, simple and unaffected. The last piece is entitled Slava (Allegro moderato) and is scored in the key of C major. This was given a most impressive interpretation, the work being based on the same Old Russian liturgical chant as Mussorgsky used in Boris Godunov. The chant is subjected to continuing variations as it builds in intensity to a thunderous climax. This is the Rachminanov one recognizes, in his massive harmonic structures and beautiful melodies. The whole piece came to a close to a resounding applause from an appreciative audience.

Debussy’s Divertissement was next. A lovely, charming work, with all the fine trappings of French elegance and refinement, this was a marked contrast to the previous full-bodied Rachmaninov. Articulation was crisp and stark, phrasing sublimely well-defined and co-ordination remarkable.

The last work on the programme was the most demanding Valse by Ravel. Ravel’s texture is always unfailingly orchestral and with a piano duet this was much in evidence. At moments it seemed that there was a consort of pianists playing and not just two – and I am not referring to the ‘loudness’ of tone (this was always kept in check, no matter how loud it got) but to the massive, broad and deep harmonic texture and colour palette used.

Ravel had for years intended to write some sort of tribute to Johann Strauss II, a Viennese-style waltz on Ravel’s own terms. Strauss, had he been alive, would probably have found the result to be gruesome. Ravel’s waltz is both intentionally nostalgic and sinister, rising from nothing but a vague rhythmic pulse, proceeding through several distinct waltz sequences (much more closely linked thematically than in any Strauss waltz), each culminating in an increasingly powerful crescendo and ending in apocalypse. Along the way come disturbing accelerations and slowing down of tempo (making this particularly unsuitable for ballroom dancing), dynamic extremes, and eerie glissandi, creating an atmosphere of violence, decadence, and decay. In short, it is a portrait of Vienna (and Europe) in the years surrounding World War I. All this was sensitively brought out by the evening’s performers and the ending was indeed apocalyptic (there is something distinctly akin to Ravel’s own Gaspard de la nuit in this work, which borders on the supernatural).

A thunderous applause greeted a performance that ranks among the finest we have had! 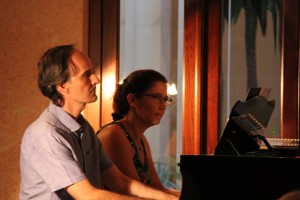 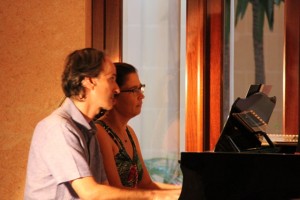