Following a wonderful concert by an Austrian Quartet based at the Mozarteum in Salzburg and the University of Vienna, the Martinů Quartet made a much-anticipated return to the Victoria International Arts Festival.  There are some peaks one can only dream about while a handful reach them and sustain them.  Such a privileged Quartet is the Martinů.  The epitomise a certain type of refined musicianship, both individually and collectively, that is the stuff of legend.  Their concert on Sunday 24 June attested to this high level of achievement.

The Martinů  opted to start their concert with a performance of Haydn’s String Quartet in B Minor op. 64 no. 2, a work in four movements.  The opening Allegro spiritoso of String Quartet in B Minor op. 64 no. 2 opened with several singing ideas which take some unusual melodic turns through phrases of unpredictable lengths.  The Martinů chose to treat the initial mood of mild concern and disturbance by shading it in such a nuanced way as to secure confidence by the end of the exposition.  The development explored some tension that continued seamlessly into the recapitulation and persisted to the end thereof.  The following Adagio ma non troppo was a typical Haydn movement – sonorous, elegant, and aristocratic in the beauty of its tone.  It began with a hymnal idea that developed in some floridly ornamented melodic variations as the movement progresses.  The subsequent Minuet emerged rhythmically pointed as it danced through its disturbed and more secure moods, and the Trio glided freely through visions of insouciance.

The Presto Finale fearlessly addressed its disturbing concerns with music that was vigorous and sometimes virtuosic in its instrumental writing.  One grace-noted idea became particularly important.  In the development section Haydn uses some of his expert pauses to powerful dramatic import, and the Martinů took full advantage of that by impregnating these pauses with meaning and significance.  Coordination was impeccable and the balance was beautifully maintained throughout.

This year being the first centenary of Debussy’s death, the Martinůchose the French master’s String Quartet in G Minor op. 10.  Cast in the traditional four movements, Quartet in G minor op. 10 has as its most distinctive feature its overarching extremely impressionistic preoccupation with timbre and sonority.  The work as a whole offered a compendium of string-playing techniques, yet it also displayed a concision of thought rare, perhaps, in a composition often regarded (along with the quartet by Ravel) as one of the seminal impressionist works in the string quartet genre.  Its fascinating and readily palpable thematic concentration seemed all the more remarkable when one realized that the very first theme of the opening movement (Animé et très décidé) came to furnish almost all of the diverse thematic components for the entire work.  Another ingenious feature that could be discerned (possibly less immediately apparent to the listener at first hearing) was that the Quartet is less dominated by melodic or harmonic considerations than by a rhythmic flexibility which carried the potential for seemingly endless variety. In this respect, Debussy’s String Quartet seems to strongly prefigure those by Bartók.  Yet, it remains unmistakably a work dominated by the sensuality and longueurs of French late nineteenth-century Romanticism, a strong feature of the slow third movement (Andantino, doucement expressif).

The work is also strongly predictive of the disjunctive and highly polarised new musical language that would assert itself in the two decades following its completion. The Scherzo (Assez vif et bien rythmé), for instance, made use of the disruptive sonic confrontations that could occur when rapidly alternating pizzicato and bowed passages produced what one commentator has described as “a confusion that forces the listener to concentrate on the textures, rather than the linear form of the music.”  These apparently disparate elements are then welded together in a finale of striking economy of means, and only at the close does it become really clear that the opening gestures of the work have actually altered themselves and coalesced to produce an organic unity of some twenty-five minutes’ duration.

This work is one that could easily break less experienced and talented quartets.  It is entirely cerebral and intellectual in style and tone, and the undoubted sonority of the work could easily belie that profound yet inscrutable logic on which it rests.  Martinůgave an extraordinary interpretation that kept the audience’s attention riveted on the discrete and discreet messages they occasionally transmitted to the audience.  These were messages clothed in a velvet glove, shining and floating, subdued yet resilient.  A truly memorable interpretation that fully confirmed why this wonderful group of musicians is so much in demand to perform in the most prestigious venues worldwide.  Their presence in the Victoria International Arts Festival not only enhances the profile of this Festival but also makes Gozo a cultural destination of note. 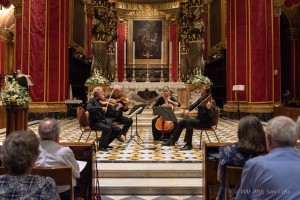 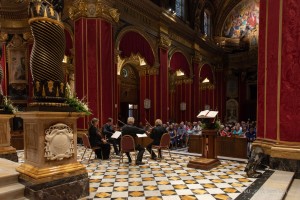 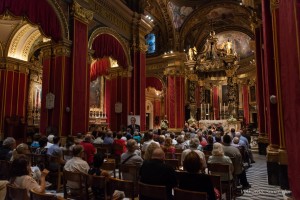