Chamber formations in the Victoria International Arts Festival programmes never fail to surprise and entertain.  Yet another unusual trio formation gave a wonderful concert on Thursday 5 July.  This Trio, prize winners of Prima la musica, the National Music Competition for Youths in Upper Austria, is made up of Hannah Friedl (Clarinet), Klara Gruber (Violoncello), and Anna-Lena Killinger (Harp).  Once more, this was the 14th consecutive time that Upper Austria sent their prize winners to perform in VIAF.

Starting two movements from CPE Bach’s Sonatas originally composed for Clarinet, Bassoon, and Pianoforte, this was a sensible choice to start a programme with: provoking without being too intellectually demanding, it allowed both musicians and audience to settle.  Adapted for the chamber ensemble we had that evening, namely, violin, violoncello, and harp, the Allegretto engaged with a light touch despite the well-conceived ornamentation on the pianoforte (evening played by the harp).  The lines were clear and well-defined, empty of the dense contrapuntal network of the Late Baroque.  The second movement, an Allegro molto, kept the layers busy with figurations and quick passage-work.  Throughout there was a most amiable rapport between the two instruments.  Glinka’s Three Russian Songs came next.  The first one, marked Moderato, started on the harp with a simple yet lovely melody.  This was then taken up by the two other instruments while the harp provided a steady accompaniment in the form of open arpeggios with a harmonic texture that varied with every repetition of the melody, whichoccurred at different registers of the instruments.  The second song was another Moderato which once again opened with a flowing melody on the harp.  The tone and temperament of this piece had a more nostalgic tinge to it, readily associated with Slavic music.  The final song was marked Andante mosso and it took full advantage of the singing qualities of the violin (performed on the clarinet), engaging with a gorgeous melody that was reminiscent of gypsy music.  This was then complemented by the cello’s intervention, who took over the melodic interest.  Together the three instruments blended beautifully in a tapestry hewn out of colour and intricate network.

Two movements from Reade’s Suite from the Victorian Kitchen Garden came next.  These were Prelude and Summer.  The Victorian Kitchen Garden was a British TV show that followed Harry Dodson as he recreated a Victorian-era garden.  The Suite from the Victorian Kitchen Garden is a very short piece split into five movements, each shorter than two minutes.  Each movement creates a different atmosphere in the garden.  Reade simulates everything from spring and summer, to a mist settling over the garden.  This theme music won the 1991 Ivor Novello award for best TV theme music.  Starting on a short melody on the Clarinet which was then reiterated by the harp to elaborate figurations on the Clarinet, the piece was constructed on a programmatic narrative.  The mode fluctuated between the major and minor, following closely the change of mood of the piece.  Summer is the final movement of the Suite.  It flowed uninhibited and naturally, mirroring the sunny and airy atmosphere of the season.

Two movements from Handel’s Trio Sonata in G Minor HWV393 provided a stark contrast to the previous work.  The entirety of the Andante, with its sedate figuration and arpeggiated subject ran like a unifying thread throughout the movement.  Melodies abounded and the violoncello was treated on an equal footing with the other instruments rather fulfilling its more traditional objective as continuo player.  The Allegro was sprightly in tone and mood into which from time to time broke into a wonderfully peculiar repeated-note motif.  Continuing with more canonical works, next came Beethoven’s Duo no. 2 for Clarinet and Violoncello.  The Aria – Larghetto was beautifully performed, a gem of a little piece that Beethoven wrote to fully exploit the beautiful tones of both instruments.  The melody was straightforward and uncomplicated yet subtle and refined.  The Rondo was reminiscent of the Mozart’s middle period in its joyous, playful tones, with rippling notes and easy banter between the two instruments.  The nature of its contrapuntal network attested to Beethoven’s unique ability to infuse greatness even in little works.

The next piece was a contemporary one by Feichtinger.  A quiet, contemplative piece, Rêverie de la vigne attempted to capture a bucolic, pastoral scene in the height of summer, with rustling leaves and singing birds.  It was almost impressionistic in texture and implied a paradoxical sense of movement in stasis.  This was beautifully conveyed by the Trio, who also impressed by their natural ability to move from one style to the next without any difficulty at all.  Strauss’s Romance in D Minor for Cello and Harp op. 243 put the spotlight on the cello and the harp.  Starting on a series of cascading chords on the harp followed by an almost ad libitum cadenza, this opening served as an introduction to the wonderful melody that unfolded on the violoncello.  It was an exquisite example of instrumental bel canto that fully exploited both the tonal and dynamic range of the violoncello and harp.  As in a grand operatic aria, the piece reached its climax with an intensity of passion one associates with the genre until a reprise of the opening melody appeared to more intricate accompaniment on the harp.  The mood quietened down until it filtered away gently and untroubled.

Max Bruch’s sixth movement from his Eight Pieces op. 83 Nachtgesang – Andante con moto, is autumnal in nature and mood.  A delicate nocturne, reminiscent of the late style of Brahms, it was beautifully performed by the Trio.  Although it was the clarinet that introduced the melody, Bruch integrates all three instruments more thoroughly than in any prior movement in this sixth section.  The texture was well-wrought and clearly defined, and special attention was given by the musicians to the tonal quality of the sound.

Cohen’s work Trio for a Spry Clarinet, Weeping Cello and Ruminating Harp was the last item on this very varied and interesting programme.  It is a modern piece that sought to capture atmosphere and mood.  The opening melody on the Clarinet was soon accompanied by the violoncello.  More than impressionistic the work is surrealistic in that it attempted to create meta-realities with strong pizzicato both on the harp and the violoncello.  A slower eerie section followed on the more energetic first one.  This was characterised by the harpist tapping on the instrument and the clarinet playing in the lower register.  The bass clarinet was employed in the following section, giving a sort of gothic atmosphere to the texture of the work.  The clarinet and the violoncello engaged in a dialogue that moved independently of the harpist’s accompaniment.  The music became increasingly more robust and assertive, with all three instruments attempting to communicate harmonically more than melodically.  The harp soon took more prominence from a melodic point of view against which the clarinet rippled in fast finger-work while the violoncello was kept busy with some difficult harmonics.  The music became more tonal and the rhythms increasingly more complex.  Glissandi and more tapping by both the harp and the clarinet further contributed to the atmospheric world of the surreal, the writing becomes more dense and the emotional intensity tightened to bring this interesting work to a resounding close.

Throughout the performance of such different and diverse works, this extremely young Trio showed not only their technical virtuosity, of which there was plenty, but an intelligent reading of the scores that attested to a maturity well beyond their young age. A highly entertaining performance indeed! 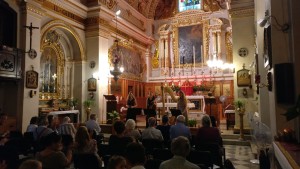 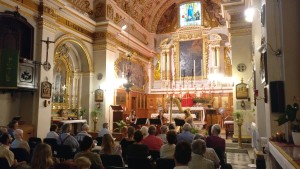 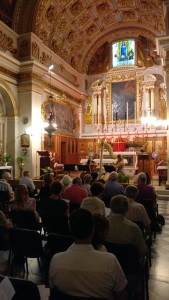