For the first time in Gozo (and perhaps in Malta as well), tomorrow’s concert will bring together two brilliant organists from England to perform as an organ duo. Calling themselves the Oxbridge Organ Duo for the obvious reasons that Benedict Lewis-Smith studied in Oxford while Julian Collings was trained at Cambridge, these two young organists will perform a programme of works by Tomkins, Frescobaldi, Mendelssohn, Wesley, Byrd, Carleton and Stravinsky – a selection that spawns the entire spectrum of organ music history.

Benedict Lewis-Smith has in recent seasons performed at the Royal Festival Hall, broadcast on BBC Radio 3, and played for a master class at the National Opera Studio as répétiteur. He continues to work with some of the world’s leading choral and operatic establishments in concert and on disc. Following on from a degree in music at the University of Oxford, Benedict is now much in demand as a conductor.  He conducted Le Nozze di Figaro at the Sheldonian Theatre in Oxford, and recently recorded a disc with the digital label, Resonus Classics.​

Julian Collings was educated as an organ scholar at Tonbridge School in Kent, before winning an organ scholarship to Christ’s College, Cambridge, in 1999, studying under Thomas Trotter and David Sanger. He is currently Director of Music at St Cyprian’s Church, Clarence Gate, a post which he combines with a busy freelance performing schedule.  Much in demand as a choral director, he conducts numerous choirs in London and is founding musical director of the much-acclaimed Arcubus Ensemble.

The Oxbridge Organ Duo was formed in 2015 to explore the unusual and somewhat neglected repertoire for organ duet. Alongside a rich variety of original works, the Duo perform a number of transcriptions of orchestral music, in addition to actively commissioning new works from leading composers both in the U.K. and overseas.

The concert will be held at St George’s Basilica and starts at 8pm. 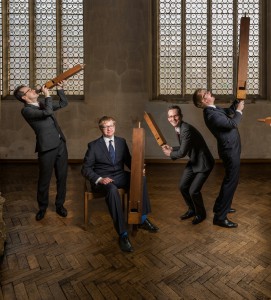