The organisers of the Victoria International Arts Festival‘s raison d’etre focuses on getting as many new performers for each edition as possible. However, the organisation is also always very proud and humbled when world-class performers show their desire to perform again over a number of years. Such is the case with the Martinu Quartet and with legendary cellist Daniel Veis and his pianist wife Helena.

Winner of the awesome Tchaikovsky Competition in 1978, this is Daniel Veis’s fourth consecutive time that he has participated in the Festival. A commanding presence that radiates force and gentleness in equal measure, Daniel Veis presents programmes that is the stuff of legend. The evening’s recital started with Marais’s formidable Couplets des folies d’espagne, better known as La Folia, a set of 32 variations originally composed for ‘viola da gamba’. Les folies is astoundingly imaginative: the variations or couplets have the whole emotional range of Marais’ music in them. Equally important, however, is the compositional skill with which Marais creates his variations. From simple but beautiful melodies to extraordinarily difficult virtuoso writing, from tunes with chordal accompaniment to complex counterpoint, from the lowest to the highest points on the gamba‘s range, Marais’ Les folies d’Espagne is a tour de force of his abilities as a composer and in Daniel Veis’s performance the composer has found an ideal interpreter.

Next came one of Brahms’s more formidable Cello Sonatas, his op.99 in F Major. Massive in range and scope, this work came across as a huge architectonic power that fully coaxed out of the cello and piano all the possible dynamic power. Indeed, the audience was left spellbound by the sheer volume that Veis managed to bring out of his G.B. Guadagnini cello. It sounded like a chorus of cellos singing in wonderful unison. Although it is a product of his middle years, this F major work is marked by a youthful boldness and symphonic approach to the piano writing, while never sacrificing a generous, easy lyricism. The first movement, an Allegro vivace, sends the cello leaping around the staff over the piano’s tremolo notes. It is the piano that introduces the ardent second subject, soon falling into cross rhythms that undermine the music’s 3/4 pulse. The dramatic development is comparatively dark, often hovering in the minor, but youthful assurance returns in the recapitulation. The slow movement, Adagio affetuoso, ventures into the distant key of F sharp major with the violoncello providing a mere pizzicato accompaniment as the piano introduces the noble first theme. The more impassioned middle section falls into F minor and the lower reaches of the cello, after which it gives way to the urgent return of the first section. Again, the piano takes the lead at the beginning of the Scherzo, an Allegro passionato, a quietly gathering storm that breaks when the violoncello soon enters in full voice. The pianoforte part in this movement is especially complex, but the atmosphere becomes more serene in the central trio section, which glides from F minor to major. Last comes a Rondo, an Allegro molto, that initially seems too light to cap such a substantial, serious sonata. The first section, soft, gentle, and songlike, punctuates episodes that are in turn march-like, ardent, and stern.

After a short, well-merited break, came the evening’s tour de force in the shape of Rachmaninov’s only Sonata for the cello, his op.19 in G Minor. The work is cast in four movements. The first is marked Lento – Allegro moderato – Moderato and is the longest of the four, especially when the exposition repeat is observed. It begins with a slow introduction in which the piano presents a six-note theme that at first appears insignificant, but in fact plays a key role throughout. The tempo picks up and the cello presents a passionate, beautiful theme. A slower, somewhat more wistful melody follows, after which comes the stormy development section. The reprise ensues and the movement ends in typical Rachmaninov fashion: the tempo speeds up as thematic morsels appear in a race to the finish, the piano crowning the coda with three resolute chords.

The second movement, marked Allegro scherzando, begins with pianoforte writing reminiscent of the faster and more sinister passages in the Rhapsody on a Theme of Paganini. The violoncello presents a rhythmic idea in the opening moments of marginal interest. Two other themes are also presented, the latter of which is beautiful and recalls the mood of much of the slow music in the Second and Third Piano Concertos, especially in the pianoforte writing. The third movement is viewed by many as the strongest of the four. Marked Andante, it begins on the pianoforte with a lovely theme of intimate and passionate character. After the violoncello enters, the material expands much the way the melody does in the second movement of the ravishing Second Piano Concerto. A powerful climax is reached, and the third movement ends softly. This movement is so beautiful, an embrace of love. Here, the listener senses a profoundly kind and gentle soul, deeply wounded and yet daring to give itself to fervent abandonment, speaking from these tones, a pure and rich human heart. The finale starts off with a robust theme on the violoncello that rather lacks the individual stamp of the composer. Still, the music is bright and vivacious and has strong appeal. There follows a second subject more in the Rachmaninov vein, full of passion and beauty and seeming to soar to the heavens. The two themes reappear throughout, the composer deftly manipulating their interplay. In the beginning of the coda, the cello recalls the piano’s opening (six-note) theme from the first movement, and then the work ends brilliantly.

Rarely performed because of the considerable difficulty it poses for the pianist, this piece brought to a rousing climax an evening of sheer magic. Hearing such sublime music convinces any listener of the redemptive powers of Art. 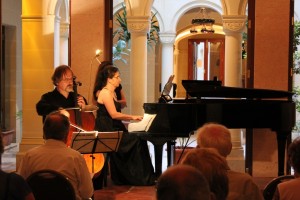 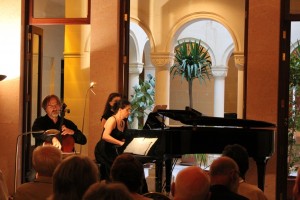 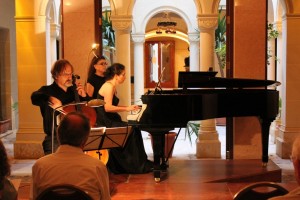 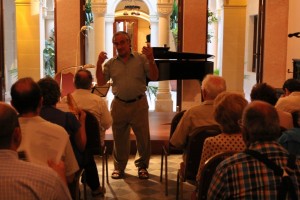