Friday 22 and Saturday 23 June saw the participation of Spiral Trio, comprising Spanish Beatriz Blanco (Violoncello), Pablo Barragan (Clarinet) and Italian pianist Federico Bosco. Performing two entirely different concerts on two consecutive days, these very young musicians stunned the audience with their versatility, technical ability and deep understanding of the works they performed. In fact, as one patron commented, if one were to hear and not see them perform one would very easily say that the ensemble is made up of older, more mature musicians.

Federico Bosco is a rare talent. Equally proficient as a soloist as an accompanist, he started off Friday’s concert with Debussy’s haunting Prelude La Cathedrale engloutie. Each of Debussy’s Préludes, Book I (1907-1910) is a short but substantial work that conveys a particular mood or impression suggested by its title. Still, as musicologist Rollo Myers notes, “the pictorial element [is not] unduly stressed if stressed at all; these Préludes are pure music.” In accordance with the composer’s practice of assigning a title only after the completion of a work, the titles of the Préludes are placed at the foot of each, rather than at the head. The Préludes represent the pinnacle of Debussy’s keyboard art; each may be rightly regarded as a miniature masterpiece. In La Cathédrale engloutie Debussy effects a striking musical depiction of the mythical submerged cathedral of Ys with archaicisms such as modality and parallel harmonies. In Federico’s hands, the work’s rhythmic stasis, combined with its massive sonorities, created an overwhelming sense of awe and grandeur, evoking the hallowed spaces of the sacred edifice.

This was followed by another Debussy staple, this time his wonderful Cello Sonata in D Minor. Performed entirely from memory by Beatriz Blanco, this young musician betrayed a maturity well beyond her years. Her understanding of the Impressionist aesthetic was very much evident and the audience was captivated by her interpretation, which was idiosyncratic yet firmly rooted in the late-nineteenth-century French aesthetic philosophy. Pablo Barragan’s musicianship is one of the finest – deep, refined and supremely elegant. He produced wonderful tones on the clarinet when performing yet another Debussy work, namely, his Rhapsody. Fully exploiting the wide tonal and emotional gamut, this was a piece de resistance and Pablo rose almost nonchalantly to the occasion.

The first evening came to a close with Clara Schumann’s Trio in G Minor op.17. In this work, the three musicians came together and it was patently evident that they have built up a formidable teamwork, affinity and understanding amongst themselves. The work is a massive Romantic one, deep and passionate, the texture thick and robust. It was sheer exhilaration and the resounding applause at the end fully attested to the enjoyment this young Trio managed to excite in the listeners.

Saturday saw the Trio presenting a programme of largely Spanish music and this concert was no less thrilling than the one on Friday. Starting off with a Clarinet solo in the work of Kovacs’s Hommage a Falla, Pablo Barragan once again manifested the ease and confidence he had displayed the previous day. This work is characterised by rhythmic diversity, emotional intensity and technical difficulty and Pablo sailed through it with assurance and aplomb. Falla’s Fantasia Betica is not a work one normally comes across in the standard repertoire for the pianoforte and one can understand why. A fairly lengthy piece, it is technically very difficult and not as pianistic as one would expect from such a formidable pianist as de Falla. Federico Bosco came across fully confident in his interpretation, managing the devilish trills with relative ease. Although the materials used are original with de Falla, they strongly evoke the folk music of southern Spain: the strident, sombre cante jondo sung in oriental-sounding scales, chords derived from guitar tunings, and a harsh percussive quality reminiscent of castanets and heel stamping. The tonal originality of the Baetica is a result of Gypsy, ‘Middle Eastern’, Sephardic, Indian and subtle French influences woven into the harmonic language. This was a tour de force that held the audience spellbound.

Cassado’s Requiebros is a bravura piece, but it never borders on the flamboyant, retaining a subtly austere and nobility of character that are the hallmarks of Cassadó’s style. Betraying the vibrant rhythmic punches one normally associates with a tango, the piece unfolds in an assertive manner by a dramatic flourish on the piano. The violoncello makes its first statement in a caballetta style arioso, which is rhythmic, syncopated and brilliant in texture. A bravura showpiece of little intellectual depth yet demanding great technical prowess, the music develops loosely in the form of a theme and variations, with the piano part providing a sound harmonic basis for the melodic line. Sticking mainly to an accompanying role, the piano comes into its own halfway through the piece, where the contrapuntal texture of the piece gets more dense and complex. Both cellist and pianist maintained an even keel intellectually and emotionally and this was also evident in d’Rivera’s Vals venezolano, a very well-known work that fully exploits the dark, seductive tones of the clarinet.

Composed in 1973 by contemporary Russian composer Rodion Schédrin, En el estilo de Albeniz throws a retrospective glance at the style of Isaac Albéniz in that it seeks to capture the esoteric Spanish style so characteristic of this composer. What is interesting is that this work is not a Spanish work, in that it does not seek to imitate the Spanish style with its idiosyncratic rhythms and colour, but seeks to merge the Slav style with that of the exotic Spanish. Characteristic of the work are the long-drawn-out melodies, striking rhythmic patterns and abrupt dynamic changes.

The final work performed at the end of a demanding two-day commitment was Brahms’s beautiful Trio in A Minor op.114. It is a typical example of the restrained and concentrated style of Brahms’ later works. It is in the typical four-movement form, and offers nothing remarkable or unusual except in its polished workmanship and Romantic warmth. There is no question that this work, as with the later sonatas for clarinet, was written with that instrument in mind – the alternative of the viola was added by the first publisher. Regardless, the clarinet plays almost a subordinate role to the cello, weaving contrapuntal inner parts as often as it takes the main melodic material.

Performing almost 150mins of wonderful music, Spiral Trio proved to be a revelation! We hope to have more of them in coming editions! 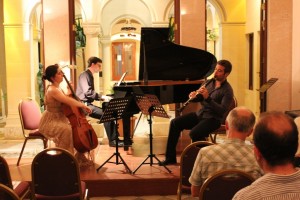 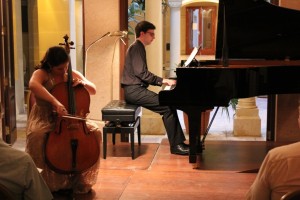 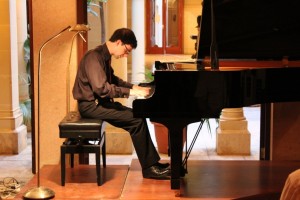 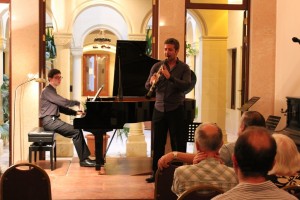 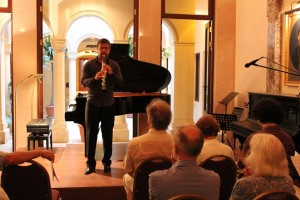