Performing works whose manuscripts are extant only in Norwegian archives, but which are composed by both Scandinavian composers and also by Campra and Lully, this was an evening that revealed a lot about Scandinavian Baroque and how remarkably contrasting that style is to the more robust, virile and sensuous Mediterranean Baroque music is!

Alternating sacred with secular works, instrumental with vocal, the programme was extremely interesting and varied, further enhanced by the Ensemble’s leader and harpsichordist, Lars Henrick Johansen, who gave very erudite explanation and analyses of the works performed. All the performers betrayed a very high level of musicianship, coupled with technical virtuosity on their respective instruments and a very refined sensibility with regard to the interpretation of the respective pieces played.  Soprano Cathrine Bothner-By has a crystalline voice which is well-modulated and which she uses to great advantage to the delicacy of the pieces she sang.

The concert was one of a very high standard and the works performed have an aura of austerity and mysticism to them that one does not associate with the more exuberant Baroque temperament of either Italy, Germany, France, Spain or even England. There is a devotional quality with it that is conducive to introspection and contemplation and the ensemble did full justice to this kind of delicacy and elegance!

We hope to see and hear more of L’État Libre de Neige! 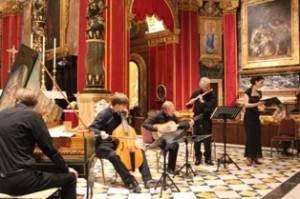