The very young chamber ensemble Triophonie from Upper Austria astounded the audience which packed Aula Mgr G. Farrugia in a concert of works by Mozart, Wolfram Wagner, Piazzolla, and Debussy.

Barely 16 years of age, each group is a soloist in his/her own right. Yet, despite this they blended exquisitely as a group and the camaraderie, understanding and collective effort betrayed a maturity well beyond their age.

Starting with the Mozart’s Divertimento in Bb Major KV254, the ensemble, which comprised of Magdalena Kraus on the violin, Julia Oberndorfer on the violoncello and Elias Gillesberger on the pianoforte, captured that essentially refined quality that is Mozart, at once unmistakable but equally elusive. Moving on the contemporary composer Wolfram Wagner, the ensemble played Trio no. 3. Here, the switch from the elegance of eighteenth-century Mozart to twenty-first century Wagner was easeful, seamless and natural.

Piazzolla’s Four Seasons, which is undoubtedly inspired by Vivaldi’s magnificent setting, is a long work but one that Triophonie carried off with aplomb, panache and conviction. Last but not least came Debussy’s Piano Trio in G Major. This was a truly magnificent interpretation, one that fully captured the nuance, flow and atmosphere one inevitably associates with a Debussy work. It was sheer delight!

This performance attested to the very high level achieved by Upper Austria students who, every year, have the option to sit for the Prima la musica National Competition for Youths. Triophonie won first prize this year and apart from other commitments they are awarded a recital at the Victoria International Arts Festival, something that Norway also offers to its prize-winners. This enhances the professional and international profile of the Festival in no uncertain terms and we look forward to welcoming more outstanding students in future editions of our Festival! 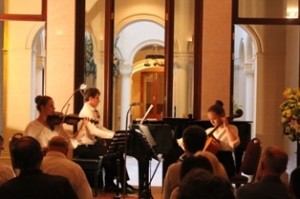