Kalypso Ensemble, a newly-formed chamber group made up of members of the Malta Philharmonic Orchestra, gave a wonderful interpretation of Vivaldi’s ever-green cycle of concertos, better known as The Four Seasons. A packed Basilica was in anticipation, despite an important football match going on practically at the same time!

The Baroque changes the atmosphere of the Renaissance world. The apotheosis of the sublime becomes again, as in the Gothic, the expression of the spiritual, but in a different sense. Here it is the expression of the superhuman and miraculous. Beauty is no longer expressed in mild and well-tuned harmonies, but in eruptive power uprooted by passion. The overabundance of decorative elements, the dissolving of organic unity into emotional unity, the drawing on light and shadow as elements of construction also characterise music and the fine arts. Musicians stop adding; they begin to multiply. The plastic clarity and profound, yet delicate, sentimental world of the Renaissance fades before the dark, mysterious depths and excited passions, before this longing for the infinite. The man of the Baroque loves unrest and tension and the overwhelmingly pathetic. The Baroque artist frowns upon strict form and harmony of proportion as being too doctrinal and coercive. It is the new that attracts him, and the more astounding, the more contrary to accepted canons of art, the more it is welcome. After all, it is the resultant expression of the Counter-Reformation. The new artist is not interested primarily in what the Renaissance artist considers beauty and perfection, and the concordance of proportion no longer interests him for its own sake. He likes arbitrary disproportion and excessive measures, for he is striving to give an impression and render a mood; he wants to present his audience with drama, the components of which are immaterial as long as the dynamic force is telling. One of the basic characteristics of this art is a revealing in space and light, in the boundless.

This was patently evident in the choice of works for the evening’s concert. Starting with Bach’s Concerto in D Minor for Oboe and Violin, the performers set the mood for the evening – one of boundless delight in all that is good, true and beautiful. The Concerto for oboe & violin in D minor is cast in three movements, with the opening Allegro ushering in a sense of joy in its rhythmic vibrancy and thematic catchiness. The striking main theme is introduced by the string orchestra, but the delightful second subject and related material are delivered by the oboe and solo violin. In fact, the oboe rarely takes up the main theme, content to busy itself with essential contrapuntal commentary and other colourful writing. The Adagio second movement is lovely in the dreamy serenity of the main theme, which is introduced by the oboe and then taken up by the violin. Again, the plentiful contrapuntal writing is, typically, deftly imagined throughout. The strings are subdued in their accompaniment in this gentle movement, but in the finale, another Allegro, they recapture a more integral role. Here the music is busy and bright, a bit less joyous than in the first movement, but with a sense of energetic playfulness, the soloists presented with all sorts of challenging, exciting writing. What come out is the assurance and confidence of the performers, and, in particular, of the soloists, Klara Nazaj (Violin) and Claudia Verdelocco (Oboe). Undisputed masters of the art, both soloists maintained equitable balance and temperate dynamic control, while the rest of the Ensemble provided the necessary harmonic blanket against which the contrapuntal writing for the soloists could be woven.

Next came the much-anticipated Vivaldi. Each of the four violinists featured as soloists: Giulia Tavano performing ‘Spring’; Klara Nazaj performing ‘Summer’; Ana Martinez Tos performing ‘Autumn’; and Riccardo Rossano performing ‘Winter’. Giulia’s stylishness, Klara’s mellow tones, Ana’s refined quality and Riccardo’s robust texture all combined to make this performance a most memorable one. Performed in the Baroque confines of the Basilica, with its rich colour and decoration, this was one concert that is not likely to be forgotten in a hurry. We look forward to welcoming the Kalypso Ensemble for more performances in our Festival. 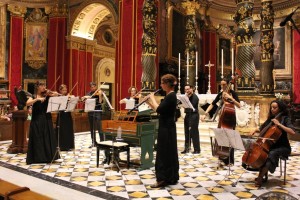 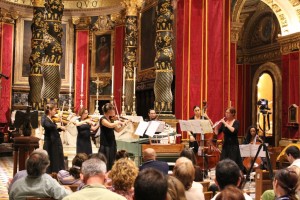