I’m referring to the Martinů Quartet from Prague. With the impressive array of performers lined up for this year’s 18th edition of the Victoria International Arts Festival, performances such as the one the full Basilica enjoyed yesterday evening are the cherry on the cake, as they say.

Martinů’s reputation needs no defending. Quite simply, they are among the very best string quartets in the world. Yesterday’s choice of programme consisted of two of the more demanding works in the canon, namely, Haydn’s String Quartet in G Minor op. 74 no. 3 (The Rider) and a rarely-performed work by Dvořák, his String Quartet no. 11 in C Major op. 61. It was an hour of sheer bliss, of extraordinary music-making, a master class in cohesion, intelligent performing, and exquisite beauty.

Starting with the Haydn quartet, popularly known as ‘The Rider’ because of its galloping rhythms in the outer movements, the Martinů immediately made their mark. Settling down right from the start, without hesitation or doubt, theirs is an assertive and confident presence and the camaraderie among the members of the ensemble is, to say the least, remarkable. After the initial motif cantered for a while, the opening Allegro proceeded with a somewhat eerie presentation of the initially cautious first theme in sparse textures. It moved on to a graceful second theme accompanied by triplets such as have slowly worked their way into the texture. These elements were superbly worked over and combined forcefully in the development, and presented again in the recapitulation that moved to a major-mode ending.

The subsequent Largo assai began and proceeded chorale-style. There was a minor-mode middle section that continued the melodic presentation over repeated-note accompaniments, with some imitation in the melodically active parts. The opening chorale section returned with some ornamental figuration. The noble and aristocratic tones of a Haydn slow movement are well-nigh peerless and this is something that the quartet managed to transmit in a most sublime manner.

The succeeding Minuet, an Allegretto, featured a wide range of textures, from phrases in two parts (imitating the harmony of the overtone series and valveless brass) to homophonically accompanied melody to active imitation. The Trio contained some deftly managed sliding chromaticisms and unexpected melodic turns and phrase lengths. On the other hand, the Allegro con brio finale began with a resolute theme stated over after-beats that imply galloping. The second theme shifted to the major mode, and the instrumental writing became more bright as the music moves along. The development cut up the first theme and threw it around, as it were, with the galloping after-beats often present, but never pervasive. There were some powerful pauses along the way that gave weight not only to the final movement but to the entire quartet. The recapitulation proceeded normally, taking us to a major-mode conclusion.

A very short break after this first quartet led to the major work of the evening, lasting over 40mins. Dvořák’s String Quartet no. 11 in C Major op. 61 is a rarely-performed work and we are grateful to the Martinů for making it known to us. Over all, despite the occasional moments especially in the slower sections where the composer reveals his penchant for Slavic melancholy, this work is atypical of Dvořák. It’s more cosmopolitan than national, less ardently political than universal in temperament. Actually, the composer had all but forgotten that he had been commissioned to compose this work. He was deeply engrossed and taken up writing one of his operas and only ‘remembered’ that he had to write a Quartet when he read in one of the local newspapers that a new Dvořák work would be premiered in three weeks’ time. This compelled the composer to abandon his work on the opera and concentrate on writing his new work!

Since the Quartet was intended for Vienna, where the Hellmesberger Quartet (for whom it had been commissioned) held a leading position, the Czech element in the writing is relatively restrained, in view of current prejudices against provincial Bohemian culture and, indeed, of much outside the now established conventions of the Imperial capital. This could account for the work being atypical of the composer. There is innovative harmonic experiment in the first movement, particularly in the recapitulation of the material, where the original key would have been expected to dominate. On the other hand, there is strong, poignant feeling in the moving slow movement, Poco adagio e molto cantabile, intended at one time as part of the Violin Sonata in F major. This slow movement was the moment in the whole quartet where the plaintive Slav tones came out mostly and the Martinů did full justice to this, especially in the melodic exchange between the cello and the viola, with the latter’s deep tonal and dynamic pathos were so beautifully expressed. A lively Scherzo, Allegro vivo, followed, thematically related to the first movement, and a Trio that is more overtly Bohemian, as is the energetic rondo that provides the Vivace of the Finale. This last movement fully exhibited the virtuosic prowess of the musicians, the clarity of tone and rhythmic precision that makes the Martinů such an outstanding quartet.

A long and warm applause greeted the end of the concert, and the quartet regaled the audience with a charming encore.  VIAF is both humbled and proud by the participation of such high-powered musicians that not only give us wonderful music but also enhances the profile and reputation of our Festival beyond any doubt! 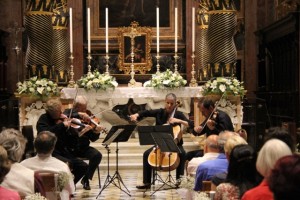 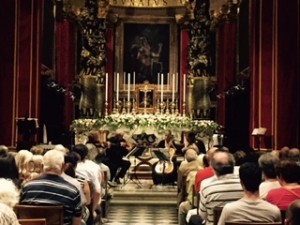 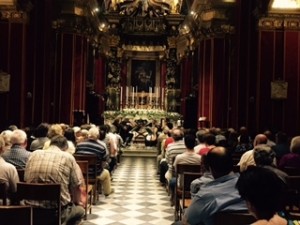