On Saturday 13 July, VIAF hosted a quartet with a difference, in that it is formed of an oboe and string trio. Comprised of George Caird (Oboe), Simon Blendis (Violin), Douglas Paterson (Viola), and Jane Salmon (Violoncello), this is an ensemble of extremely mature and intelligent musicians who approached their chosen works with incredible intellectual insight and the right dose of emotional resonance.

The concert, held at St Francis Church, started with Mozart’s Quartet in C K285B, originally for flute and string trio.  The flute was substituted by the oboe for this concert.  The Köchel catalogue number of K. 285 number for the C major Flute Quartet is misleading.  Despite being adjacent to those of the two quartets Mozart completed while he was in Mannheim as a result of a commission from the Dutchman Ferdinand Dejean in 1777 and 1778, it is now known to have been composed in Vienna rather later.  While no reliable autograph manuscript exists, a sketch of ten bars of the opening Allegro has been discovered, and the same leaf also includes one of the arias from the German opera Die Entführung aus dem Serail, on which Mozart was working during the latter part of 1781 and 1782.  The Quartet can therefore be dated to this period, a conclusion confirmed by paper analysis.  In addition, the second of the two movements, the Theme and Variations (marked Andantino) has a close relationship with another work dating from this period, being a simplified version of the sixth movement of the magnificent Serenade for 13 Wind Instruments K.361.  The authenticity of this arrangement has been questioned, as has Mozart’s authorship of the final bars of the Allegro.  Quite why Mozart should have returned to composing a quartet featuring an instrument he was not really partial to without apparent motive is a puzzle, the most likely explanation being that, like its successor (the Flute Quartet in A K.298), it was composed or arranged for the domestic enjoyment of friends.  The scoring is the same as that of the other flute quartets; flute, violin, viola, and cello.

Throughout, the playing was of a supremely fine quality – one that is essential to any Mozart work, as it were.  It is so easy to engage too much with a Mozart composition, but the Caird Oboe Quartet maintained that necessary objectivity that is so necessary to the rationale of the eighteenth century.

The second work on the programme consisted of Beethoven’s String Trio in G Major op. 9 no. 1, a 4-movement piece belonging to the opus 9 Trios.  This G major Trio opens with an introduction marked Adagio.  The Allegro con brio section that followed seemed at first rooted in the same world as that of the Adagio as the violin continued with the same music, albeit at a much livelier pace.  The cello soon introduced the spirited main theme of the Allegro section.  A second melody, more restrained, appeared to complete the exposition.  After the main materials were repeated, they developed and there followed a recapitulation and coda. Overall, the mood of the opening movement was calm and featured little, if any, conflict.

The second movement (Adagio, ma non tanto e cantabile) continued the general serenity of the work, although in the middle section the main theme intensified somewhat.  The mood settled back to its more peaceful character and the movement ended quietly.  An important element here was the lullaby-like rhythm throughout most of the movement.  It had a mesmerizing effect, as Beethoven’s deft manipulation of the rhythm imparted an atmosphere of dreaminess.   The third movement is a Scherzo, marked Allegro.  There were two rather delightful themes in the main part and an attractive trio.  The structure of the movement is interesting: after the main themes were repeated, the trio appeared and seemed headed to a full repeat, but faded away before it was completed.  It was played again, now in another key, but failed to fully repeat, coming to a halt.  After this pause one might have expected a return to the main section of the Scherzo, but the ever-inventive Beethoven presented the Trio section for a fourth time and in yet another key.  The main Scherzo material finally returned for a full repeat, but with some clever changes.

The finale was a lively and colourful Presto.  The composer’s previous Presto finales had been Rondos, but this one broke with the pattern, using a genuine sonata-allegro scheme. The movement began with an idea that was played staccato on the violin.  This unusual opening was followed immediately by another surprise: a theme of a decidedly different persona took centre stage to offer startling contrast.  The staccato music then returned to complete the exposition.  There was a repeat of the expository materials, after which came a development section.  Here, the composer demonstrated his deft sense of writing for the three instruments, imparting brilliant colour and wit to the busy atmosphere.  The recapitulation divulged further subtleties in the changes that the composer introduced. This remarkable movement capped a equally remarkable work, which might be assessed as nearly the landmark in chamber music as his Third Symphony was in the symphony genre.

The superb camaraderie manifest in the interact among the players was commendable, impressing the audience with the lovely blending of tones and easeful rapport displayed.

The final item on the programme was none other than Mozart’s famous and difficult Oboe Quartet in F Major K 370. In the opening Allegro,not surprisingly, the oboe is charged with most of the thematic presentation, although the violin and viola share in the musical argument throughout this sonata-form movement.   The Adagio slow movement illustrated the wide range of expression we find in the Quartet.  It is set in D minor (the relative minor), a key in which Mozart wrote some of his most expressive music, and which in his operatic arias is generally associated with vengeance.  The depth of feeling in this movement, particularly demonstrated by the brilliant playing of George Caird, was more profound than in the Adagio of the Flute Quartet K.285, also in the relative minor.  The work closed with a spirited Rondo, in which contrasting episodes saw the trading of musical material between instruments.  The most notable feature of the movement was an unusual, thirteen-measure poly-metric segment in which the oboe played in 4/4 meter while the strings continued in 6/8, not noticing that one of their number has gone astray. Overall, the movement is bright and cheerful in mood.

Yet another glorious concert in series of little miracles happening every evening! 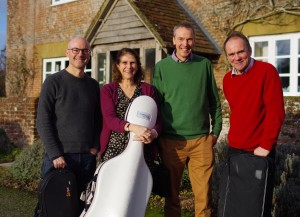