This evening we are looking forward to hosting Léman Pianoforte Trio from Switzerland, comprised of Felix Froschhammer (Violin), Magdalena Morosanu (Violoncello) and Julia Froschhammer (Pianoforte). This is the first time that our Festival is welcoming an ensemble from Switzerland, making it the 28th country that has had its representatives performing for us since we started!

This evening’s programme consists of works by Beethoven, Rachmaninov and Piazzolla’s Four Seasons of Buenos Aires. It is a most varied choice of works, taking us from the classical, on to the late Romantics and the twentieth century.

Felix Froschhammer is a German violinist who had his initial violin studies with the legendary Salvatore Accardo, subsequently participating in numerous master classes. His dazzling performances captivate audiences world-wide. In fact, Neue Musikzeitung has this to say about him “from the first tone until the final note the audience was spellbound by the outstanding force of his technical skills and his natural instinct for the music.” He was appointed leader of the Neuchâtel Symphony Orchestra, Switzerland, in 2010 and has teamed up with world-class musicians, including his sister Julia Froschhammer. He also has a number of CDs to his credit and his latest recording will be released with the ArcoDiva Label. Performances have seen him appearing all over Europe and the Far East and most of them have been broadcast on numerous television and radio stations.

Magdalena Morosanu was born into a family of professional musicians and commenced her violoncello studies with her parents. She completed her undergraduate studies at the Bucharest Music Academy, furthering a postgraduate programme at the Hochschule für Musik und Theater, Rostock, Germany. She passed her Masters degree with distinction from the Lausanne Music Academy. Magdalena is the recipient of numerous scholarships and competition prizes and has performed extensively all over Europe to glowing critical acclaim. Her repertoire is vast, to include Baroque masterpieces which she performs on a period instrument.  Performing with a few of the best-known orchestras in Europe has enabled her to cover the major canonical works. She is currently a Professor of Violoncello at the Sion Conservatoire, Neuchâtel Conservatoire, and the Cheseaux-Romanel Music School, all of them in Switzerland. Magdalena is fluent in seven languages and counts travelling and performing among her passions.

Julia Froschhammer hails from Munich, Germany.  She commenced her pianoforte lessons at the age of six with her father, the pianist and composer Fritz Froschhammer. As a very young musician, she was the recipient of important competitions, amongst which one finds the German National Competition Jugend Musiziert. She completed her undergraduate studies with full honours from the Richard Strauss Conservatoire, Munich, and in 2000 she won the only prize in the category ‘Violin and Pianoforte’, teaming up with her brother, Felix, in the International Wolfgang-Jacobi Competition for twentieth-century chamber music. Postgraduate studies have taken her to the Conservatoire de Lausanne and she has also won the coveted Paderewski Prize for her sparkling and intellectually insightful performances. Apart from her dazzling solo performances, Julia is also a keen chamber music player and has recorded for Radio, Television stations apart from having numerous CDs to her credit.

The concert will be held in the Aula Mgr G. Farrugia and starts at 8pm. See you there! 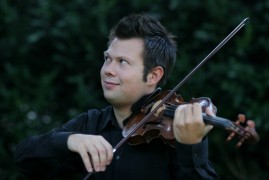 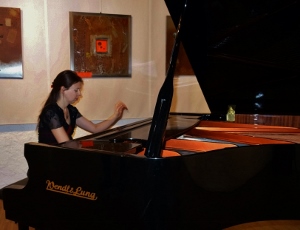