Following a massive success with his pianoforte recital on Wednesday 14 June, Gabriele Vianello teamed up with friend and colleague Dejan Bogdanovich.  It was a tale of two virtuosi that unfolded on the evening of Thursday 15 June.

The recital took off with Schubert’s Grand Duo in A Major D574.  Scubert’s structures tend towards the monumental not only by virtue of the work’s length but also by its breadth.  This Duo is no exception.  Really and truly it is a Sonata more than anything else, one structured on four big movements.  The Allegro moderato began with a strolling, dotted-rhythm piano figure over which the violin floated a sweet and constantly evolving melodic line.  The pianoforte contributed to the thematic dialogue in no uncertain manner, but the violin dominated the musical texture of this uncommonly lovely movement.  Taking a cue from Beethoven, Schubert followed the first movement with an exuberantly heroic Scherzo, featuring leaping intervals, brusque cross rhythms, and unexpected juxtapositions of forte and piano.  A soft, sinuous chromatic violin scale announced the contrasting trio, which was characterised by a subtle dynamic range and trimly gliding intervals.

The pianoforte fully established its musical partnership in the lyrical, 3/8 Andantino. Composed in the ABA form of one of his Lieder, Schubert provides a mellow duet without words, in which the violin and pianoforte contributed equally to the musical discourse.  The final Allegro vivace continued the melodic interweaving of the violin and piano parts. Cast as a whirling Viennese waltz, the movement brought Schubert’s Duo Sonata to a buoyant conclusion.

Next came two very interesting pieces, one a Bach movement, the first one – an Adagio, from his Sonata no. 3 in C Major for solo violin BWV1005 followed by a modern work by Peter Maxwell Davies which is inspired by this ravishing Adagio, his Sonatina for Violin Solo op. 334.  These two works were extremely demanding intellectually, asking for maximum attention on both the part of the performer as well as the audience.  The Bach movement evolved from a single, repeating dotted rhythm; one harmonic layer was added and then another, the steady pulsation being interrupted only twice (once near the beginning and once near the end) for the purpose of expanded and enriching major cadences.  This was beautifully executed by Dejan Bogdanovich, endowing the texture with the right gentle dose of emotional engagement, attention to minute detail, and full intellectual power.  Following immediately with Davies’s work, the listener could discern the British composer’s attachment to Bach.  It is a work that manifested an unerring instinct for the validity of the past yet couched in the language of modernity.  Bogdanovich’s playing was impeccable: phrasing, dynamics, tone – all was proportionate to the demands of the work, without resorting to unnecessary sentiment.

Last on the programme came the very difficult Sonata in D Minor op. 75 by Saint-Saëns. This work is not for the faint-hearted – and faint-hearted is not the right description for either Dejan or Gabriele.  The huge opening movement (Allegro agitato), a taut, leonine construction built around Classical sonata-form lines, offered a gripping first subject heard at the very start, with no slow preamble.  It conveyed a sense of theatrical dialogue, powerfully underlined in complex exchanges between the two instruments.  The second subject, somewhat more relaxed and lyrical, afforded the required contrast, while the development section explored the potentiality of the two main subjects with great ingenuity.

The slow movement (Adagio) is placed second, and again, the main melodies seem to draw heavily on the example of Beethoven, a composer whom Saint-Saëns greatly admired.  The third movement (Allegretto moderato), is in fact a Scherzo in all but name, and provided motifs of extreme clarity and translucence, perhaps reminiscent of Mendelssohn, while the brilliant finale (Allegro molto) placed searching virtuoso demands on each of the players in more or less equal measure.  Throughout, both performers maintained and sustained an impeccable balance, each coming to the fore when the occasion demanded.  The performance was characterised by a beauty of tone, mature understanding of the work, and brilliant technique.

Two charming encores were given following a resounding response by the fired-up audience. 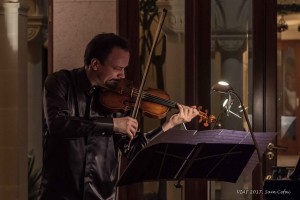 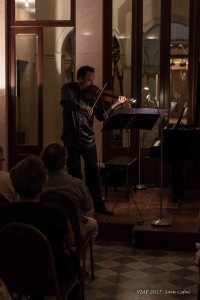 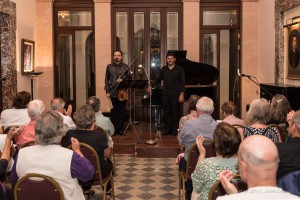 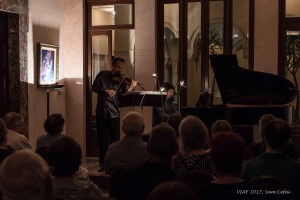