Following the resounding success of the opening concert of this year’s VIAF, which is being held in honour of Mro Joseph Vella, pianist Gabriele Vianello kicked off a series of 34 chamber music concerts with a recital featuring works by Mozart and Chopin.

Gabriele, who is Professor of piano studies at the prestigious Venice Conservatory, is no newcomer to the Festival; indeed, he has already regaled enthusiastic audiences with his impeccable technique and beautiful renderings of canonical works ranging across the Classical and Romantic repertoire.  He has also teamed up with virtuoso violinist Dejan Bogdanovich for duo recitals on more than one occasion.

The recital on Thursday 7 June opened with two Mozart Sonatas, namely, Sonata in C Major K279, and Sonata in Bb Major KV333 (‘Linz’).  What is immediately striking is the mellow and beautiful sonority of Gabriele’s touch.  He is blessed with a full-rounded technique, yet one that is never given supremacy over interpretation and feeling.  The Sonata in C Major K279 began with an Allegro sonata-form movement featuring a four-measure theme that came across more a group of single-measure gestures than a melody. A more tuneful secondary theme, in G major, dissolved into the scales and leaping motives of the closing group.  The development section began in G minor, after which Mozart moves the opening material of the piece through several keys, and breaks it down into its constituent parts in a manner that looks forward to Beethoven.  In a typically brilliant gesture, Mozart alters the transition in the recapitulation by building a passage based on the bass line from the main theme.  Through variation technique, Mozart extends the secondary theme to such a degree it sounds as if we have entered a coda, but this impression fades as soon as the closing material, transposed to the tonic, appears and concludes the movement.  This movement was performed with crisp clarity and articulation, impeccable phrasing and the right dose of dynamic intensity.

In sonata form with a brief development, the central Andante is set in F major.  The occasional juxtaposition of duple-metered melodic lines with nearly constant triplets produced a sense of rhythmic freedom.  The development section is unusually periodic, using several measures of the main theme.  Great dynamic contrasts marked the performance of this movement, in which changes from piano to forte sometimes occurred from measure to measure, yet, Vianello was throughout very careful in maintaining eighteenth-century control and balance.  The finale, marked Allegro, was a rapid, straightforward sonata-form movement in C major.  The second theme could not be more different from the first: its repeated notes, played staccato, contrast with leaping and falling pattern of the first theme.  The development section focuses on the main theme and is relatively brief, maintaining the light atmosphere expected of finales.  Three false starts precede the actual recapitulation, after the first few measures of which Mozart inverts the material, placing the melodic line in the bass.  Sudden dynamic contrast again reared its head in the developmental coda.  This was concluded with panache and aplomb.

One of Mozart’s longest and most demanding piano sonatas, the second sonata performed was KV 333, known as ‘Linz’, given that Mozart composed it while staying in this city. This is superb work which was almost certainly designed as a concert vehicle for the composer himself, rather than being intended as teaching material.  Like its immediate predecessors (K330-332), the Sonata in Bb Major was originally believed to have been composed some years earlier than its present dating of 1783.  This work is written in a concerto style, with an opening Allegro that alternates ‘solo’ and ‘full’ passages, bravura passage work with delicate filigree, and a final Rondo that includes a cadenza.  The central Andante cantabile in Eb Major is clearly influenced by Mozart’s experience as an opera composer; its melodies may justifiably be compared with those of a love duet.  Vianello displayed full mastery over both the structure and content of the work.  Given the dual function of the piano here, as both soloist and ‘tutti’, the performer was able to maintain a wonderful balance between the roles, ones that were characterised by poise, elegance, and brilliance.

Next on the programme were a handful of Chopin works which are all too well-known with audiences.  Chopin never fails to attract and disarm, and in the hands of Vianello the result was pure magic.  Starting with the demanding Andante Spianato e Gran Polonaise Brillante op. 22, Vianello came even more into his own, if that were at all possible.  The singing tones of his touch, the elegant phrasing, was immediately in evidence in the opening ‘Andante’ of this work, one that could easily be classified as a Nocturne.  It begins with a lovely theme in the upper register, clearly of a Romantic bent.  Like many of the composer’s creations, there is something sad in its beauty, which to some will always represent the exiled Chopin’s homesickness for country and family.  A consoling, mellow theme is next heard and after recalling some of the main material, this section ends quietly.  The unusual word “spianato” means “level” or “smoothed,” and these concepts give an idea of the music’s tone.  The frenzied brilliance of the ‘Gran Polonaise’ was expertly transmitted to the audience – the contrast could not have been more stark yet there was balance too.  Technical difficulties proved no hurdle for Vianello, who sailed through the piece with ease and confidence.

One may perhaps think that fast works test the technical mettle of a performer.  Yet, it takes a musician to give voice and soul to a slow work — and it was in the two delectable Nocturnes (op. 27 nos 1, 2) that Vianello shone like star.  The first of the pair is cast in the melancholy, brooding key of C sharp minor, and employs the typical ABA form with coda. Vianello emphasised a piquant alternation between the minor and major third scale degrees throughout the opening gesture; the arpeggiated left-hand figuration, common throughout the Nocturnes, added pathos to the atmosphere, while the central section was imbued with a far more overtly passionate nature; the resigned coda as played by Vianello was an eloquent testimony to its composer’s finest silk.

The Nocturne in D flat major op. 27/2, is of a different sentiment altogether, exploring the many sides of just one basic mood rather than presenting the kind of dramatic conflicts contained within its immediate predecessor.  Two strophes are repeated three times each, varied with ever greater ingenuity upon each reiteration (the piece is one of the composer’s most graceful essays in fioritura ornamental practices).  The static atmosphere of the opening (a wandering melody floating upon an unchanging Db Major background) was broken up by the unexpected intrusion of the minor subdominant a few bars later.  The powerful main cadence of the piece, near to its end, but not actually the final cadence, was surely one of the most glorious moments in the evening’s performance, as it is of Chopin’s entire output: the elaboration of an otherwise elementary 4-3 suspension by means of arpeggiation in the right hand was nothing short of magical.

The recital ended with one of Chopin’s more formidable compositions, namely, the Ballade no. 4 in F Minor op. 52.  Surely not for the faint-hearted, this veritable tour de force was given a mesmerising interpretation by Vianello.  It is difficult to accept different versions from what one is used to my legendary interpreters of this Romantic composer, but the few idiosyncratic nuances given by Vianello surely rank him among the greatest of Chopin performers.  Pregnant with melodies, an affirmative first subject and a more submissive second one, emotions ranging from the exuberant to the most desperate ones — it takes both technical virtuosity and a mature understanding to carry off this work.

Chopin’s artful management of his thematic material early in the work is what makes its release at the end so devastating, and this is a subtle aspect of the work that Vianello grasped from the opening notes. The first-time listener ccould not foresee in the inexpressive initial statements of the two main themes the eloquence, high passion, and measureless power of Vianello’s climaxes; even the episodes seemed to have more energy.  Not only did the work begin shyly, but that quality pervaded it for nearly a third of its twelve-minute length.  Chopin’s tight structure seemed to guide the two main themes into acting their parts like characters in a play, but it was full of astonishing surprises, too.  The organic flow as well as the passion and sweep of the music ultimately won the listener over, as he could track the course of the themes from their introverted initial stages through utterances that only gradually grew more articulate, until passion overwhelmed both.

So palpable was the dramatic feeling and flow of this Ballade that it was impossible to listen to the work without feeling overawed and overwhelmed.  Ballade in F Minor was proof, unequivocally and unarguably, of Chopin’s tragic vision and of his transcendent greatness as a creator, and Vianello did full justice to this and more.  The spell-bound audience simply erupted into a merited thunderous applause at the end. 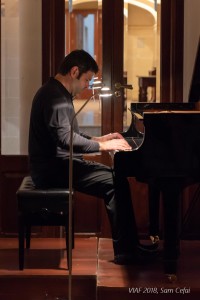 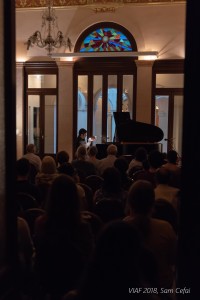 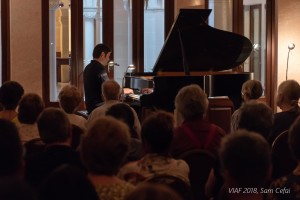 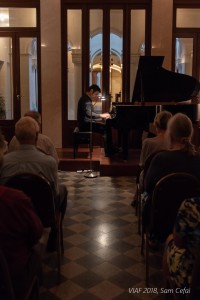