Some performers are a guarantee of high standards and superb musicianship.  Certainly, Gabriele Vianello, Venetian piano virtuoso, is one such performer.  Understated yet authoritative, his contribution to VIAF has served no mean measure towards enhancing the profile of the Festival.

Choosing a programme worthy of any renowned concert hall, the recital started with one of Beethoven’s very late sonatas, namely, Sonata no. 30 in E Major op. 109.  By the time Beethoven composed this work, critics allege that his output had declined substantially, perhaps owing to his deafness and disappointments in life.  However, when one considers that the ‘only’ complete works to emerge from the period of 1820-1823 were the last three piano Sonatas, the Missa Solemnis and the Ninth Symphony, well, then, one would not be so sure what critics mean by ‘decline’!  Even when compared to these imposing works, the E major Piano Sonata retains its status of a masterpiece.  It is a remarkable work in several respects. The first movement has a nearly unique structure: it opens with theme marked Vivace ma non troppo that almost immediately slows to an Adagio espressivo. Thereafter, the two contrasting tempos and utterances alternate. Scarlatti and Mozart had used such a scheme before, but never in such a bold and innovative fashion.  On the surface, this short movement had a serene, almost angelic quality, but, like many other works written during this period, the composition’s surface was merely one dimension among many, a subtle feature that Vianello had the acute discernment to bring out.  Indeed, nothing about this Sonata was one-dimensional.  Thus, for instance, the subdued, brightly-lit realm suggested by the beginning of the work eventually led the listener to sections where the narrative slowed down, conjuring up dark shadows that evoked feelings of longing and doubt.

The second movement, given its sonata form structure would be typical of a Beethoven first movement if it were not for its terse development and extreme brevity.  There are two subject groups in this Prestissimo, with the first led by an assertive theme that more than vaguely suggests Schumann’s piano style.  More subdued at the outset, the second subject generated tension and energy as it progressed.  Following a brief development, an interesting reprise led to a concise coda.  The finale is twice as long as the previous two movements put together.  It is a theme-and-variations scheme, whose main theme is marked Andante molto cantabile ed espressivo.  The melody was delivered in a superbly beautiful manner, in style looking towards the Romantic movement that was then in its infancy.  It was tranquil yet melancholy, pleased yet valedictory.  A few of the six variations generated further variations either through development (the third variation), or as a result of a two-tiered layout (the second variation).  While the finale contained many lively moments, it was predominantly slow-to-moderate in tempo and generally subdued, gaining in confidence as the narrative proceeds.  This movement concluded with the main theme played slowly and serenely.  While the ending suggested a certain peaceful resolution of life’s struggles and conflicts, it also revealed an idiosyncratic feeling of resignation which was free of conflict and fear.

Nino Rota is perhaps better known for his film music.  During his long career, Rota was an extraordinarily prolific composer.  He wrote more than 150 scores for Italian and international productions from the 1930s until his death in 1979 – an average of three scores each year over a 46-year period, and in his most productive period from the late 1940s to the mid-1950s he wrote as many as ten scores every year, and sometimes more, with a remarkable thirteen film scores to his credit in 1954.  Alongside this great body of film work, he composed ten operas, five ballets and dozens of other orchestral, choral and chamber works, the best known being his string concerto.  He also composed the music for many theatre productions by Visconti, Zeffirelli and Eduardo De Filippo as well as maintaining a long teaching career at the Liceo Musicale in Bari, Italy, where he was the director for almost 30 years.

However, Rota was also a composer of serious classical music and he ranks among the best examples of those who fell under the irresistible yet formidable charm of the music of J.S. Bach.  Falling under the spell of this giant of the Baroque period he manifested the influence absorbed from this genius in an understated manner, either with simply paying homage to his name or else in a more intricate manner by emulating his style in a modern idiom.  The work performed this evening, Variazioni e Fuga nei 12 toni sul nome Bach,  is an instance of the latter style.  Starting in dramatic style with rippling arpeggios, the music quietened down momentarily until the first of the variations asserted itself with robustness and authority.  The mood and temper of the following eleven variations varied from the texturally transparent to those that seemed to carry the entire weight of Bach’s genius on their shoulders.  This was a work delivered with formidable power and gentle intimacy at the same time.

The final piece on the programme was Chopin’s symphonic Polonaise-Fantasie op. 61.  This magnificent work has much in common with the Ballades, but still retains the basic ternary dance form and the characteristic rhythms of the Polonaise.  A long and improvisatory introduction led to the initial presentation of the Polonaise material.  This section is not a typical dance section divided into structured phrase groups. Instead, Chopin presents a theme in Polonaise style that is subjected to continuing and ongoing variation and development.  The effect, especially with the complex harmonies and frequent key changes, is one of a self-generating improvisation, again a most subtle and unique quality about the work that Vianello captured with tenderness and nuance.  Unlike all the previous Polonaises, there is no literal duplication of material.  This long and passionate section eventually led to slow, lyrical and introspective central Lento.  This entire section represented the usual Trio, but as there was no actual reprise, it could not really be considered as such.  The Lento began with a sustained, chordal melody over a richly melodic bass part, a passage that was played with wonderful tenderness and attention to tonal and dynamic detail.  This led to a passage that was a return to the Polonaise character but actually consisted of new material.  A cadenza using double trills eased into a partial reprise of the Introduction and the final brilliant peroration on the Lento theme.

This is an extraordinarily complex and forward-looking work.  The kind of continuing variation that Chopin uses here as well as the highly chromatic and adventurous harmony anticipate the techniques of Wagner and Mahler.  In spite of its somewhat loose structure, the Polonaise-Fantasie remains as one of Chopin’s greatest and most effective pieces, and it surely was a most fitting end to an extremely high-powered recital. 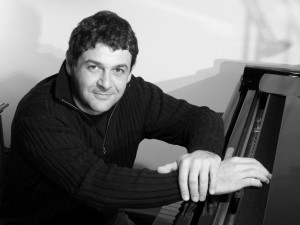