The highlight of this year’s 20th anniversary of the Victoria International Arts Festival took place on Wednesday 7 June at St George’s Basilica. The concert featured the legendary Cappella Musicale Pontificia ‘Sistina’ under the direction of Mgr Massimo Palombella.  Featuring works extant in the Vatican Archives, some of them specifically written for this magnificent choir, the massive audience that packed the Basilica to the rafters was regaled with motets by Palestrina, Allegri, Anerio, and Lassus.

Starting with the Gregorian Chant of the Rorate coeli desuper, the Introit of the fourth Sunday of Advent, the magical atmosphere was immediately set, with utmost simplicity and dignity.  Sung by the tenor section of the Choir, there was unity of tone, quiet declamation, and exceptional phrasing.  This was followed by one of Palestrina’s glorious motets, namely, Ad te levavi  in 5 voices, antiphon of the first Sunday of Advent.  For this motet, the male section was joined by the Pueri Cantores, whose timbre was characterised by purity, clarity, and impressive pitch. The blending was exquisite throughout; there was evenness of tone and equitable phrasing.

Lassus’ Magnificant VIII Toni was a dialogic exchange between the choir in 4 voices and the Gregorian response sung by Cesare Stoch from the organ loft.  The antiphonal effect was perfectly maintained, ans Lassus’ austere harmonies, which contrast so markedly with Palestrina’s more rich and robust ones, were admirable conveyed.  Palestrina’s magnificent Super flumina Babylonis was next, a piece marked by irregular rhythmic patterns, syncopation, and word-painting of the finest order.  This text, from Psalm 137 ,laments the exile of the Jews, the exile of every individual who abandons truth, peace, and the “life in adundance” which everyone innately desires.  Palestrina’s composition is taken from the 2nd book of the Motets a 4 voci published in 1587, re-issued in Venice in 1604. An interesting feature in the execution of this piece is the fact that Mgr Palombella opted to speed up the middle section, which created a stark contrast to the more staid opening.

Surely, one of the more precious and priceless legacies that composers left to the Sistina Choir is the famous Miserere by Gregorio Allegri.  During Lent, particularly Holy Week, the verses of Psalm 50 feature prominently.  This is the penitential Psalm par excellence.  It has been a perennial favourite with the People of God.

Specifically, the celebrated Miserere by Gregorio Allegri, a musician from Rome and Cappella Sistina singer who lived between 1582 and 1652, has always resonated with those who respond to pain, especially during the Liturgy on Good Friday.  It is alleged that Mozart, in 1770 when still a fourteen-year-old boy, after having listened to it wrote it down from memory.  The charm and appeal of this composition emanates from its formal structure which features three subjects interacting with each other, namely, the choir in five voices, the smaller ensemble of four soloists, and the assembly which responds in Gregorian chant.

The version we listened to is taken from the Sistine Codex of 1661 extant in the Vatican Apostolic Library, pertaining to the Sistine Chapel. The manuscript is numbered  205 – 206.  Apart from the original version, the choir is singing two verses in the very well-known edition, featuring the high note C.  This version is taken from Charles Burney’s “Music which is sung annually during the functions of Holy Week in the Pontifical Chapel” dated 1771. The soloists’ version is taken from Robert Haas dated 1932.  The soloists are male singers utilizing, according to the ancient praxis, the ‘falsettisti’ and not the trebles.

The full choir sang their verses with a superb nobility of note, with the diapason basses sending shivers down one’s spines.  The beauty of the alto voices wove a magnificent carpet of sound while the trebles sang plaintively and evocatively.  The superb four-male soloists sang from Chapel of the Blessed Eucharist, and the haunting beauty of their tones complemented the plaintive meaning of the text, while the Gregorian chant was once again sung by Cesare Stoch from the organ loft.  It was a great pity that fireworks took off halfway through this piece which, however, did not in any way confuse either the singers or the audience.

The motet Christus factus est came next, and is attributed to Felice Anerio.  This particular version comes from the Collection of Fortunato Santini which is housed in the Diocesan Library of Munster.   The attribution to Francesco Anerio is backed by Padre Giovanni Battista Martini. In the Sistine Chapel manuscript of 1705 number 354, it is attributed to Baldassare Sartori, himself a Sistine Chapel singer in 1698.  This copy is the oldest extant one of this motet.  Followed by short antiphon Adoramus te Christe by Palestrina, both these works had a distinctly evocative tone to them, fully attesting to the meaning of the text and carrying the perfect emotional weight in the delivery of the music.

Palestrina’s famous Sicut Cervus for 4 voices is taken from the 2nd Book of Motets a 4 voci published in 1587.  The fervour and desire explicit in the text was superbly brought out by the Sistina Choir who, however, never sentimentalised or in any way allowed the emotional to take over the intellectual response to the text.  The concert was brought to a resounding close with Palestrina’s Tu es Petrus.  The intricate polyphonic elaboration of Palestrina reflects the grandeur which inspired Rome, particularly in the concurrent construction of the new St Peter’s, custodian of the Apostle’s sacred remains.

The words, which in the first decade of the seventeenth century were inscribed in the imposing dome of St Peter’s, were set to music: these words are the solemn declaration of our Lord in Cesarea, where he answers Peter’s profession of faith “You are the Christ, the Son of the living God”, by changing Peter’s name into “Cephas”, literally meaning Rock.  Christ proclaims Peter a sign of stability and the foundation of communion in his Church.  the contrapuntal web was intricately woven by the Choir, attention being given to voice-leading throughout, with Palestrina’s broad sweep in his phrasing fully and clearly articulated.

The massive applause that greeted the end of this concert attested to the appreciation shown on the part of the audience.  An encore by Monteverdi was delivered next, after which H.L. Bishop Mario Grech, whose invitation made the Sistina Choir concert possible delivered a few meaningful words.

In a supremely generous gesture, Mgr Palombella then invited the Laudate Pueri Choir of St George’s Basilica to join the Sistina Chapel Choir in a rendition of Perosi’s Tu es Petrus. The audience witnessed history in the making for not only was the Laudate Pueri Choir allowed to sing as a massed choir with the Sistina Chapel Choir, but the former’s director,Can. George Joseph Frendo, was invited to direct the massed choir.  A magnificent spectacle it was, and a sound to match, rock-solid, robust, and aristocratic in tone.  Filing out together in the recessional, brought this august concert to a dazzling close.

We will remember this concert for ever. 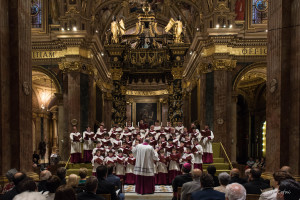 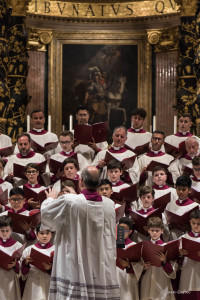 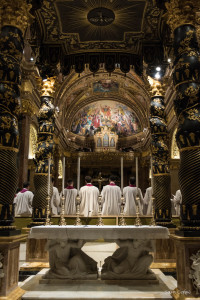 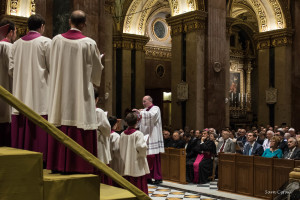 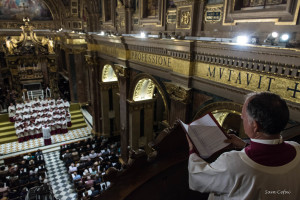 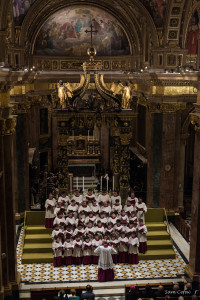 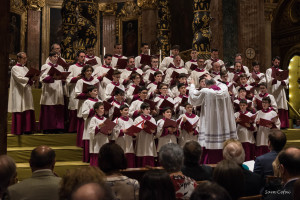 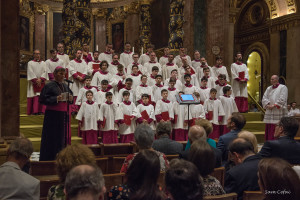 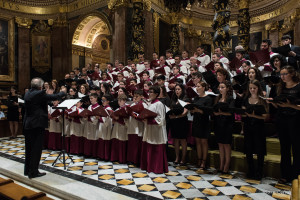 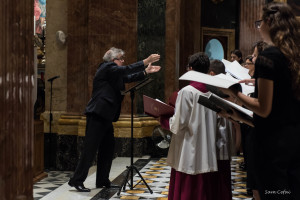 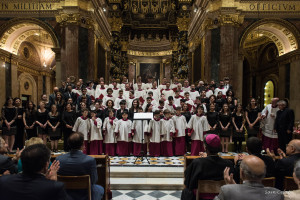