There is something about chamber music that speaks personally and universally, intimately and comprehensively to one and all.  It is a very special genre but one is always left surprised at how relatively easy it is to relate to it.

The fifth concert of this year’s 20th anniversary of the Victoria International Arts Festival saw the first of no fewer than 18 different chamber music concerts (and here I am not including the solo recitals, choirs, vocal ensembles, big bands, etc).  It could not be a more fitting start when the team fielded is a trio from the legendary Mozarteum, Salzburg. It featured world-famous violist Thomas Riebl, who has had enormous success performing with Jessie Norman, Andras Schiff, Oleg Maisenberg, Pierre-Laurent Aimard, Gidon Kremer, Natalia Gutman, Sabine Meyer, and the Julliard String Quartet.  Between 1979 and 2004 he was a member of the Vienna String Sextet and for over thirty years Thomas has been Professor of Viola Studies at the famed Mozarteum, Salzburg.  Add his wife on the violoncello, Prof. Susannah-Ehn Riebl and pianist Biliana Tzinlikova who, a day earlier, had regaled an enthused audience with her virtuosity in a solo recital, and the recipe is one for potential success.

The performance started with Beethoven’s Piano Trio in Bb Major op. 11. The evening’s violist Thomas Riebl himself made an alternative version to substitute the violin with the viola. This Trio started its life in the winter of 1797-8 as a Trio for the rare combination of Clarinet, Violoncello, and Pianoforte.  However, with an eye on maximising sales, Beethoven published it in an alternative version for orthodox Piano Trio, transferring the Clarinet part, with minimal adjustments, to the violin.  Compared with the ambitious op. 1 Trios, this Trio, in three movements only, is a work of relaxation, showing the fiery sans-culotte in genial, urbane mode.  Or so it sounded to the audience. When it was published, however, the ultra-conservative critic of the Allgemeine musikalische Zeitung found the Trio ‘difficult’ and took Beethoven to task for writing ‘unnaturally’. (One shudders to think how Beethoven reacted to this.)

During the evening’s performance, the expansive opening Allegro con brio, with its arresting unison opening, had little of the dialectical urgency of the first movements of the op. 1 Trios.  However, Beethoven being Beethoven, makes sure there are many captivating and piquant touches. After an emphatic close in the dominant of F Major, for instance, the music is cleverly deflected through D Major and G Minor before the expected ‘second subject’ (a gracious, sweet tune, rhythmically related to the first), finally emerges.  The soulful theme of the Eb Adagio, sounded by the violoncello in its tenor register, sounded akin to the Minuet of the recently composed Piano Sonata in G Major, op. 49 no. 2, later recycled in the Septet, op. 20.  In Beethoven’s sketches the two themes are virtually identical.  There is a typically dramatic and poetic modulation from Eb Minor to a ‘pianissimo’ E Major at the movement’s centre, after which, with the restoration of Eb Major, the theme is embellished with glistening keyboard figuration.

It was probably the Viennese clarinettist Joseph Bahr, for whom Beethoven wrote the original version of the work, who suggested the theme for the variation finale, a favourite number from Joseph Weigl’s new comic opera L’amor marinaro (‘Love at Sea’), premiered at Vienna’s Burgtheater in October 1797.  According to Beethoven’s pupil, Carl Czerny, the composer often contemplated writing an alternative finale and letting the variations stand as a separate piece – presumably because he found them too lightweight.  In fact, these nine variations are among the most inventive in early Beethoven.  Highlights are the spare-textured no. 2 for viola and violoncello alone, the two free variations in the tonic minor (numbers 4 and 7), and the trenchantly polyphonic final variation, which then pivots the music from Bb to G Major for the start of the witty syncopated coda.

Throughout the performance of this Trio, balance was most equitably maintained, the crystal clear notes of the viola propped up by the dark tones that come so natural to this instrument.  The violoncello blended exquisitely with the texture of both the viola and the pianoforte, while the latter was a formidable pillar against which the other two instruments could lean and climb at the appropriate moments.

Next came Rebecca Clarke’s Sonata for Viola and Pianoforte (1919), a work that is not normally canonically represented in concert programmes.  The first movement, marked Impetuoso, began with a vibrant fanfare from the viola, before moving on into a melodic and harmonic language reminiscent of Debussy and Vaughan Williams, two important influences on Clarke’s music.  Her language is at times very chromatic, and shows the invention of Debussy in the use of modes and the whole-tone scale.  The second movement, marked Vivace, made use of many interesting ‘special effects’ such as harmonics and pizzicato. The final movement, Adagio, was both pensive and sensual in its language. Here, the texture of this movement gave ample expressive scope to the viola who dazzled with the singing quality of his instrument.  The sonata ended in a lush and brilliant pyrotechnical display, showing off the full range of the viola, as well as the pianoforte (whose part is of equal difficulty.)

The final work on the evening’s programme was Brahms’ Clarinet Trio in A Minor op. 114.  It is the first of four chamber works inspired by the principal clarinettist of the Meiningen Court Orchestra, Richard Mühlfeld.  Brahms had been aware of Mühlfeld’s artistry since the 1880s, for the Meiningen Orchestra had played his Second Piano Concerto and premiered his Fourth Symphony.  It was in 1891, however, that Brahms, while on a week-long stay at the Meiningen court in March, asked Mühlfeld to perform privately for him. Apparently Brahms was impressed, and in November he returned to Meiningen with two new works in hand, namely, the Trio for clarinet, cello and piano, op. 114, and the Quintet for clarinet and strings, op. 115.

The Trio is a typical example of the restrained and concentrated style of Brahms’ later works.  It is in the typical four-movement form, and is exceptional in its polished workmanship and Romantic warmth.  The alternative of the viola was authorised by Brahms himself, as may be gathered from the composer’s letter to Fritz Simrock on 23 January 1892.  It conforms in every detail to the clarinet part.

In the first movement, Allegro, a fairly straightforward sonata form grows out of a simple rising arpeggio and descending scale that develops into a complex contrapuntal web that is sustained throughout.  A particularly sensitive use of colour and registral combinations between the instruments characterised the second-movement, an Adagio; the entire movement is constructed of subtle rearrangements of two basic ideas.  The third movement is marked Andantino grazioso.  The main section of this typical dance form was a lovely and nostalgic Viennese waltz, while the trio section was an Austrian Ländler, the forerunner of the waltz, replete with yodelling clarinet (viola).  The short and exciting rondo finale, Allegro, came across in Brahms’ typical gypsy idiom, with its mixture of three-against-four rhythms and colourful minor-mode harmonies.  This final movement was dazzling and virtuosic, and it ended the work decisively.

A short lovely Faure’ work was performed as an encore after a resounding reception greeted the performers at the end of the concert.  A truly uplifting experience. 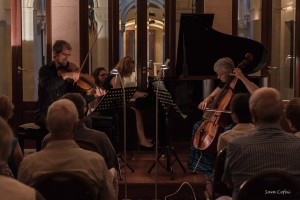 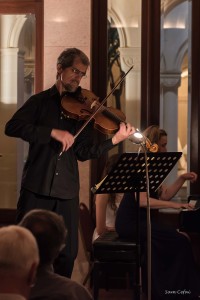 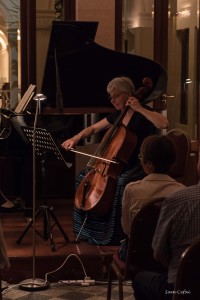 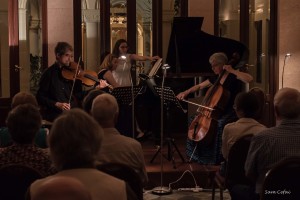 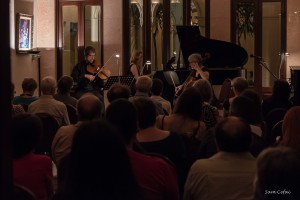 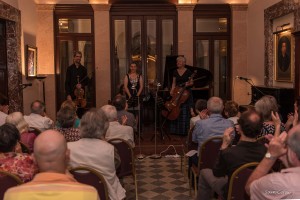