In complete contrast with the concert on the 1st July, the one on Monday 2nd July presented a saxophone and pianoforte recital with Sam Corkin and David Knotts respectively.  By contrast we understand the diversity of the chamber ensemble – the musical standards reached were on a par with Les Cordes Marines performance.  Victoria International Arts Festival aims at providing diversity and colour to its programmes, and this aim is achieved and much appreciated by musicians and patrons alike.

Sam Corkin is an exceptional musician, and in David Knotts he found an equally inspiring one with whom he produced a wonderful programme ranging from classical works to more light-hearted ones.  The programme commenced with Matthew Locke’s two movements from The First Musick.  An English Baroque composer, he produced works inspired by the Baroque Suite that reached its apotheosis in the hands of J.S. Bach.  The First Musick follows the paradigm of such a Suite, with different dance forms forming contrasting movements that together make up one whole work.  The two movements performed manifested the particularly English free-style contrapuntal form that was the backbone of the national Baroque repertoire; Locke’s work came across as wonderfully inventive, and his intricate counterpoint was beautifully articulated by both musicians in their interpretation of this lovely work.  There was a noble tone that was well captured by the saxophonist while the pianist supported the unfolding phrases in an unobtrusive yet ubiquitous manner.

Next came Paule Maurice’s Tableaux de Provence.  This could not have been more of a contrast, both in style and in spirit, with Locke’s work.  Tableaux de Provence is a twentieth-century work which shows influences from the late impressionistic world of the early Debussy and Ravel.  Largely programmatic, it unfolds in a series of miniature pictures detailing aspects of Provencal life in the south of France.  Maurice herself explains each of the five sections by giving a programmatic title to each.  In the first movement, ‘Dance of the Young Girls’, depicted the joyous sound of young girls in Provence dancing to their native music, typically known as the ‘farandoll’.  The second movement is entitled ‘Song for my Love’ and this was beautifully executed by the performers in the style of a serenade whose accompaniment sounded like the open strings of the guitar at the start of the piece.  The third movement, contrastingly, is ‘Bohemian Woman’ or ‘Gypsy’; this rhythmic soliloquy embraced the unpredictable moods and feelings of the gypsy world.  Next came ‘A Sigh of the Souls for the Alyscamps’, which developed into a gorgeous lament of friends who hover around the cemetery at Alyscamps.  Finally, ‘Lou Cabridan’ came across as a great, flying creature, turning and bustling through the Provence area.  The contrasting movements of this work were full of animation and charm and no wonder is it considered one of Maurice’s finest compositions.

David Knotts is an accomplished musician in his own right, and in the following two pieces he manifested both his technical prowess and musicality.  Performing two pieces by Norwegian Romantic composer Edvard Grieg, namely, Summer Evening op. 71 no. 2 and Wedding Day at Troldhaiugen op. 65 no. 6, he displayed a range of dynamic and tonal possibilities that lit up the works with a myriad palette.  Summer Evening was typically charming and romantic, with the piece employing some adventurous harmonies which almost bordered on the impressionistic ones, more readily associated with a Debussy.  Contrastingly, Wedding Day at Troldhaiugen was more robust in character, employing the rhythms that were reminiscent of a brisk march.  Towards the middle, the piece gained in momentum and intensity until it settled once again on the initial melody with more complex harmonies and finger-work.

Joseph Vella’s Sonata for Alto Saxophone and Pianoforte op. 109 is a difficult work, both technically and musically, one that attests to the composer’s formidable theoretical and contrapuntal expertise and one that also asks for seasoned and mature performers to carry it through.  This Sonata is basically atonal, although there are flashes of tonality, especially at cadence points. The first movement opened with a motif on the pianoforte that was pervasive throughout.  The music developed into a quaint dialogue between the saxophone and the pianoforte.  This led to the second movement, built on a beautiful, charming melody.  The pianoforte provided the basic accompaniment to the long, drawn-out singing phrases on the saxophone.  What unfolded was a seamless harmonic fabric that was indistinguishable from the ethereal, haunting beauty of the melodic line that fully exploited the power and tenderness one invariably associates with the alto saxophone’s dynamic and tonal range.  The thread unifying the various parts was based on colour rather than rhythm.  If one still wanted to find rhythm in this haunting second movement one had to look for it in the innumerable colour particles, in the most subjective oscillation of the subtle colour patterns.  This rhythm, flickering restlessly, could no longer be abstracted from content and form; it rested on the relationship of theme, form, and colour, receiving validity exclusively from the structure itself. The mood of this movement was one that laments loss while at the same time rested in a kind of paradoxical happy melancholy tinged with wistfulness and fulfilment.  The third movement made an assertive introduction through a short, rhythmic phrase on the pianoforte, after which the saxophone made its entry that was immediately echoed by the pianoforte.  The movement developed on a succession of snatches of dialogue between the two instruments. The end result was a work endowed with both intensity and immediacy.  The partitioning of surface and form into innumerable brush strokes of varying nuances gave the representation a new vitality, a life of the most acute instantaneousness.  Yet, it curiously retained that calm detachment so characteristic of Vella’s works, and this is where the composer balanced out his innate irrepressible lyricism with his acute sense for form and structure.  Both performers gave a memorable rendition indeed! 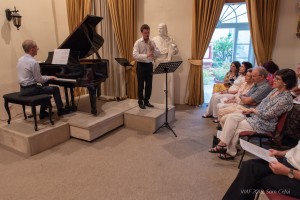 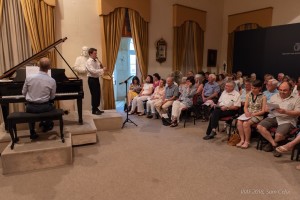