On Sunday 5 July, St Augustine Church rang to the sound of the most magnificent tones coming from a Brass Quartet, Trombonet, from Norway. All four players, 2 trumpets and 2 trombones, are under eighteen, but the maturity and technical virtuosity they performed with belied their young age and experience. No-one would be deluded of he or she thought these four young performers were regular members of one of the more important orchestras in Europe.

Possessing grace, style, technique and intellectual maturity, this was one performance that dazzled. A brass ensemble is always exciting: the silver tones of a trumpet or the noble, aristocratic sound of a trombone are hard to beat – and this is exactly what a greatly enthused audience was regaled with on Sunday.

The two trumpets heralded the opening of the concert with Signal, the first movement from Koetsier’s Petite Suite. Playing from both end of the church, this was indeed an exciting fanfare, contrapunatlly devised, with each trumpet jostling for supremacy. The Quartet then played the second movement, a Prelude, which immediately established a firm rapport amongst the performers and showed them to be on equal footing both musically and technically.

Next came Gabrieli’s Ricercar del Sesto Tuono. This was Baroque music at its finest, beautifully phrased and executed. The piece came across as an organic, living creation that that fully held the audience’s attention, guiding it along from the first entrance to the final chord, despite their sobriety of means – four intertwining voices tossing themes to and fro, mostly in long notes, in one tone colour. Hindemith’s Morgenmusik is a classic work, structurally robust and musically very interesting. This work consisted of a little Lied (Song), which was played legato and with feeling, framed by two faster-paced movements, tackled brilliantly and with verve.

Couillaud’s Trombone Duet brought into focus the two female trombonists. One could not but admire their dazzling technique, with an even tone maintained throughout and with a dynamic range that grew from a delicate pianissimo to a full-blown forte, without ever compromising the tonal quality of their sound. Truly impressive! Scheidt’ s Canzona Bergamasca was a delightful piece, light-hearted and fresh, fully bringing out a formidable technique from all performers. This work really shone at a brisk tempo and was a great showpiece especially when all the notes were tongued. Over all it came across as a bright happy work with great challenges for all the parts.

Mitt hjerte alltid vanker (Norwegian Folk Tune) was a most plaintive and melancholic song, actually a Scandinavian Christmas Carol that was truly evocative and beautifully played. The same could be said of Schumann’s arrangement of two Lutheran Chorales. Here, the homophonic playing was impeccably controlled – giving the sound of the brass instruments a taste of the noble organ. Banchieri’s Two Fantasias presented contrasted tempo markings, the first one being stately and majestic, while the second one was carefree and canters on at a lively pace, while Uber’s Miniature for Brass Quartet is a three-movement work that really takes the form of a Sonata for Brass ensemble. Starting with a lively Allegro, that saw challenging interaction amongst the quartet, it moved on to a sedate Andante sostenuto that fully brought out the mellowness and noble tones of the brass instruments. The final Allegretto moved at a tripping pace, bringing this delightful work to a close.

Four shorter works followed, the most impressive being the second part of Rossini’s famous overture to William Tell, which was played at breakneck speed on all four instruments. This all but brought the house down. A contrasting piece was the haunting ‘Dying Swan’ from Saint-Saens’ Carnival of Animals. Sharing the melody between the trumpet and the trombone, one tends to forget that this piece is one of the most well-loved works for violoncello!

A short, brilliant encore suggested to a most reluctant audience that the concert had come to an end!

Trombonet, made up of Trond Sagbakken, Malene Fosli Flataker (Trumpet) and Pernille Alsos, Marie Nøekleby Hansen (Trombone) is this year’s prize winner of Norway’s  National Competition for Youths. VIAF offers the yearly prize winner a performance in the Festival and we look forward to hosting yet more wonderful talent from Norway! Thank you! 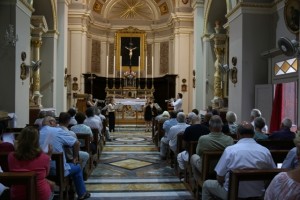 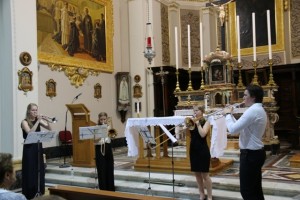 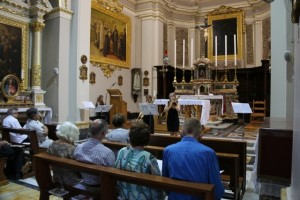 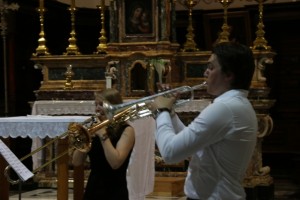 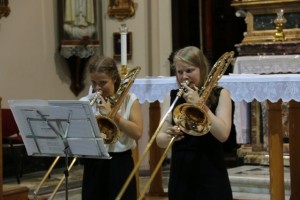