True to its nature, Victoria International Arts Festival has this year continued building on an extraordinary range of contacts that are not only enhancing the profile of the project and validating the endeavour, but also making VIAF much better-known among the elite performers that are established names on concert programmes.  Le Jardin Musical is a world-class prize-winning ensemble consisting of Christine Antoine (Violin/Leader), Katia Lagresle (Violin), Catherine Simon (Viola), Olivier Destéphany (Double Bass), and Pierre Perdigon (Harpsichord).  Add to this glorious list of wonderful musicians the name of Vincent Beer-Demander (Mandolin), and the recipe is one for success.  It was performed in the magnificent Baroque interior of St George’s Basilica, and the venue more than gave its part towards making this a fabulous concert, one that is not likely to be forgotten by those privileged to attend to it.

Francesco Geminiani’s Concert for Strings op. 2 no. 2 opened the programme. Immediately, one was struck by the wonderful sound of the strings and the very beautiful tones of the harpsichord.  In this work, Geminiani followed Corelli’s models in his numerous Sonatas and Concertos, but his music sounds generally richer, harmonically somewhat more complex, and substantially more difficult to play than that of his former teacher, with a certain free and creative flair. This was abundantly clear in the slower movements that alternated with two Allegro movements in the Concerto performed in this concert.  The two faster sections were replete with the Baroque techniques of syncopation and hemiola, complex rhythmic structures, and fast passage work that required clear articulation and definition.

Vincent Beer Demander, who had already performed together with Pierre Henri Xuereb (Viola) and Gregory Daltin (Accordion) earlier in the Festival joined the ensemble to perform the first of five concertos specifically composed for mandolin and string ensemble.  The first of these was Vivaldi’s Concerto in C Major for Mandolin RV425.  The music consisted of virtuosic treatment of the solo instrument, the mandolin, and the interplay between the soloist and accompaniment of the ensemble.  The demands are considered higher than other Concerti by Vivaldi, and the work is one of the most famous mandolin pieces.  The outer movements, both marked Allegro, were rapid, cheerful tunes that had the everlasting freshness one invariably associates with a Vivaldi work. Throughout these two movements, Vivaldi creates sharp and low contrasts between the mandolin and the rest of the orchestra, attracting much attention to several dynamic ranges within the music.  The second movement, marked Largo, was typically suave and charming in character, and in contrast to the rapid and enthusiastic tune of the first movement, was slower and thoughtful in its impeccable execution.

Emanuele Barbella’s Concerto in D Major for Mandolin and String Ensemble came next, followed by another Vivaldi concerto, this time for Violin and Mandolin, in Bb major. Barbella’s work is one of the more obscure ones in the repertoire.  The first movement, marked Allegro ma non presto, was characterised by rippling notes and quick figurations against a steady harmonic background on the ensemble.  The Andantino came across as a soft, lilting piece that fully brought out the singing quality of the mandolin, plaintive and almost human-like.  This was in stark contrast to the third and final movement, a Gigue.  Inserting a dance form which one would normally associate with the last movement of a Baroque Suite attested to the fact that the mandolin was used for both popular and sophisticated entertainment, on the village green as well as in the salon.  The movement was very fast paced and scored in the traditional 12/8 time, with a strong rhythmic feel and a happy, carefree mood to it. Vivaldi’s Concerto in Bb Major for Violin and Mandolin started in concert with the ensemble, with the violin and mandolin exchanging contrapuntal exchanges that are jovial.  Soon, the two solo instruments took the lead against the continuo in a witty and exciting dialogue.  These exchanges were interspersed by tutti responses from the ensemble.  The violin soon took the melodic lead against rippling accompaniment on the mandolin, and this practice was inverted with the mandolin taking the lead soon after.  Antiphonal effects provided the much-vaunted qualities of sound and echo, the ‘forte/piano’ doctrine of emotions that is the mainstay of the Baroque.  The second movement, a Largo, is scored in the relative key of G Minor.  The violin wove a gorgeous melody so typical of the composer, with a cadential phrase that, however, did not lead to a resolution but to a reprise of the first phrase in a slightly louder tone.  Throughout all this, the mandolin accompanied on plucked broken chords.  Throughout this second movement, the violins did not play and the continuo accompanied softly in pizzicato notes.  The melody in a minor key was then translated into its major equivalent in the home key of Bb with a return to G Minor to bring this delectable movement to a close.  In a sprightly triple meter the final Allegro movement developed in cascading phrases on the violin echoed on the mandolin, after which both solo instruments played at a distance of a third.  The writing became increasingly more contrapuntal and exciting, shifting from major to minor mode and back with ease and aplomb.  Embellishments and ornamentation characterised this movement, and the ensemble was kept in the background and only doubled the continuo and at times the solo instruments, unlike what happened in the first movement.  A brief echo of the initial phrase brought this lovely work to a close.  All through this work, Christine Antoine projected a brilliant tone that reached in every nook and cranny of the Basilica, while Vincent Beer Demander managed to coax the most refined dynamics on the mandolin, with the most subtle of pianissimos reaching an enthralled audience that packed the church.

Factoring in the time element, Le Jardin Musical opted to leave out the first movements of the next two concertos, namely, Paisiello’s Concerto in C Major for Mandolin, and Cimarosa’s Concerto in G Major for Mandolin.  Paisiello’s second movement is marked Larghetto alla siciliana and this had a rustic feel to it that conjured up a pastoral scene of relaxation and peace.  It had lilting rhythms and a rather plaintive tone colours the texture of the music, fully bringing out the natural singing voice of the mandolin.  The final Allegro was a typically busy piece: despite that it did not adhere scrupulously to form as a first movement does, it was a robust movement that brings this lovely Concerto to a resounding close. Meanwhile, Cimarosa’s Largo was an exquisite piece of beauty, fine balancing and clarity of tone, while the final Allegro assai once again resorted to strong playing, with the solo instrument and the ensemble engaging in playful exchanges that became complex harmonically and rhythmically towards the end.

The final work on the programme was Vivaldi’s glorious Concerto in D Major for Mandolin RV93.  Anyone acquainted with this work knows the range of technical difficulty it embraces: one either makes it or breaks it, and in Vincent Beer Demander and Jardin Musical we were assured a safe and wonderful passage home, as it were.  This is a very fresh-sounding Concerto in D Major, reminiscent of Vivaldi’s best-known work, his Four Seasons.  The first movement, an Allegro, is replete with very fast-paced figurations which were delicately embellished with ornaments, so typical of the age.  The first section was repeated in the dominant halfway through the piece.  The dynamic range alternated between a forte and a piano, while the tonal range spanned the entire gamut of the solo instrument.  Echo effects abounded towards the end to finish the movement off with the slightest of rallentandi.  The Largo is also scored in D Major.  A truly ravishing melody unfolded on the mandolin, against sustained chords on the ensemble.  This is one of the most beautiful slow movements that Vivaldi ever composed – ethereal, lush, and gorgeous, resting on a carpet of sensuous harmonies provided by the ensemble.  There was a dripping sweetness and a beautiful tone colour that exuded a sense of serenity, tranquillity, and peace.  In contrast, the final Allegro was heavily rhythmic and hyperbolic, making use of overstatement to an extent that it could be said it is an expression of the counter-reformation sentiment prevalent at the time.

Throughout, Le Jardin Musical displayed such fine and sophisticated musicianship, camaraderie, and refined interpretative powers.  The continuo was a formidable duo, steady, unobtrusive yet commanding – such a wonderful alliance when one comes across it. Vincent Beer Demander is a supreme master of his art and he, together with the ensemble, had the extraordinary ability not only to display the virtuosity that the works necessitated, but to never allow the showmanship to take over the intellectual connection they undoubtedly established with the music.

A spontaneous standing ovation greeted the closing chord of this memorable concert, one that added a couple more feathers to the organisers’ cap. 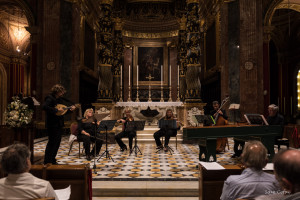 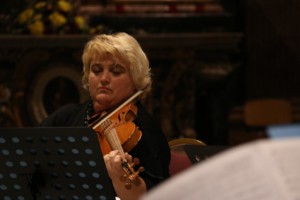 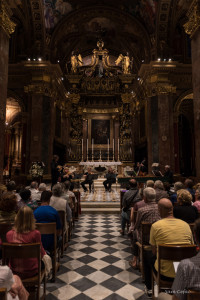 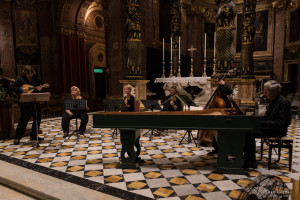 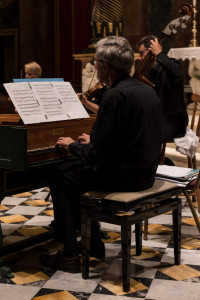 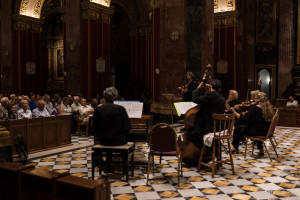 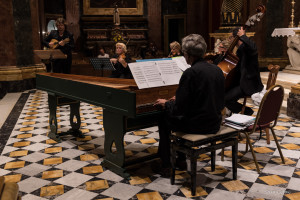 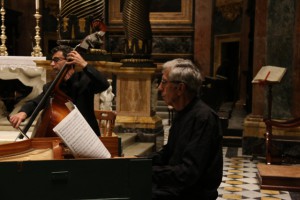 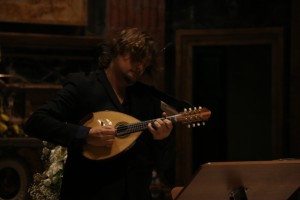