The concert was held in the idyllic ambience of Manresa Retreat House chapel, a place thankfully untainted by construction work — a rare commodity nowadays on our islands. Gunnar played to a packed chapel, and started his concert with Agustin Barrios Mangoré’s La Catedral.  This is one of the most colorful and difficult works in the guitar repertoire. It originally had two movements, and is often performed in that form.  The original opening movement, Andante Religioso, represents the reverent mood that struck the composer when he entered the cathedral and heard music of Bach being played on its organ.  The writing for the guitar is remarkable in imitating the sound of that music.  The original second movement is marked Allegro Solemne, and it represents the impression of leaving the Cathedral and returning to the bustle of the street outside the building.  In 1938, Barrios added an opening movement, Prelude (Saudade). Throughout the three movements, Gunnar maintained a deliciously fine balance and even tone.

Villa-Lobos’ Praeludium no. 2 followed.  This Prelude relies on the musical genre of the ‘choro’, similar to the composer’s Choros no. 1, also for solo guitar.  During the evening’s performance this was especially evident in the systematic rubato and harmonic structure of the first section, and in the rhythms and melody in parallel fifths for the central section, which recalled the ‘berimbau (musical bow) and the stylized capadócio dance-game called ‘capoeira’.  Sor’s Variations sur un theme de Mozart (ca. 1820-1823) draws its thematic material from the aria “Das klinget so Herrlich” from Mozart’s opera The Magic Flute (1791).  Written in E major, one of the most idiomatic keys for the guitar because of its open-string resonance, the work commenced with a brooding introduction in the minor mode, curiously similar to many of Beethoven’s sonata introductions.  A statement of the theme was followed by the sunny first variation, which was suitably punctuated by scale runs throughout.  The second variation, in the minor mode, was solemn and stately.  The third came across as good-natured, relaxed, and of an extemporized quality, while the prelude-like fourth, based on two alternating rhythmic figures, was more structured.  The fifth variation provided a flashy conclusion, a mercurial perpetuum mobile of several dozen measures that came to rest on a cadence of two full-textured chords.

Albeniz’s Asturias is a perennial favourite with classical guitar lovers.  Its sultry tones and seductive melody hits bull’s eye every time it is played properly.  Gunnar brought out its rich harmonic vocabulary, rhythmic complexity, extensive dynamic range, and the ambitiousness of its architectural design.  It was a haunting, sultry piece, replete with the pathos, passion and exuberance one associates with the Spanish spirit.

Bach’s Praeludium, Fuga, Allegro in Eb Major BWV998 is a tour de force whichever way one looks at it — structurally, tonally, dynamically — this is definitely not a work for the faint-hearted.  Gunnar took the bull by the horns, as it were, and simply excelled in a matchless manner.  The Prelude is of the same constantly-arpeggiated kind that we find in the Well-Tempered Clavier (the second book of which dates from around the same time as this work).  There was just a single pause in the motion: just before the coda, Bach throws a fermata over a third-inversion seventh chord, complete with a rich suspension that is so enrapturing that only a flurry of 16th notes can propel the motion forward again.  The Fugue is on a subject in all quarter notes; the 16th-note-oriented episodes have as much of the Baroque concerto about them as they do fugue.  The Allegro is a brisk binary-form dance in joyous, vigorous running 16ths. A true masterpiece gloriously rendered.

This was followed by York’s Sunburst, a lovely and virtuosic piece, oscillating a mood of exuberance with a more introspective one.  Dissonances were not always resolved but they eased their way into the next harmonic progression gracefully. Tango en Skai by Dyens is almost autobiographical in the way the composer relates the turbulent time he went through during a period of distress in his life.  Gunnar interpreted this work with the introspection and contemplation it demanded, bringing out some subtle tones in his guitar.  The last piece was again by Barrios Mangoré, this time Vals op. 8 no. 4.  It is a dazzling piece, starting simply enough but developing into a work of immense brilliance and demonic virtuosity.  A slower and more sedate middle section offered a momentary respite from the richness and technical demands of the last section.

Norway must be very proud of musicians like Gunnar Voster! 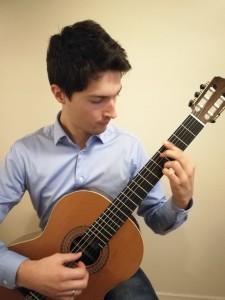