It was with conviction and confidence that VIAF 2017 opened to a packed house on Tuesday 6 June. The concert, featuring the Malta Philharmonic Orchestra, soprano Claire Debono, tenors Joseph Mercieca and Paul Patinka, the Laudate Pueri Choir of St George’s Basilica, and the University of Delaware Chorale, all under the direction of Joseph Vella, Artistic Director of VIAF. The concert was devoted to the music of Joseph Vella, with his beautiful ‘A Canticle Cantata’ and Symphony no. 3 ‘The Apocalypse Verses’ performed.

‘A Canticle Cantata’ was premiered in 1985 and it attests to the composer’s glorious lyricism in both the soloists’ interjections, the massive choral forces, and the exquisite children’s chorus which was sung by the female section of the Laudate Pueri Choir. The text of this Cantata is taken from the well-known Canticle of Canticles of the Old Testament, an allegorical text if ever there was one.

Arguably the most poetic episode in the Bible, the Canticum Canticorum (attributed to Solomon) is at once an intellectual definition of a lyric affirmation and an effusive outpouring behind which lies an inscrutable logic.  It is one of three books of Solomon, contained in the Hebrew, the Greek, and the Christian Canon of the Scriptures.  The term Canticum Canticorum itself signifies “the most excellent of songs”, “the paradigm of songs”, “the song of songs”.  This poem can be interpreted on both a literal and an allegorical level, but the basic premise is that of a love song.  In the allegorical interpretation, it makes no essential difference whether the bride is taken as a symbol of the Synagogue, that is, of the congregation of the Old Covenant, or of the Church of God of the New Covenant.  The spiritual interpretation of the song has proved a rich source for mystical theology and asceticism.  On a literal level, the Song unfolds as a bond of love between man and woman, the search for happiness, the yearning for fulfilment, and the peace in attaining that which the soul has craved for.  It is a song of torment and peace, of agony and ecstasy.

Inspired by the sheer beauty of the music in the verses, Joseph Vella freely adapts parts of the Song of Songs in his Canticle Cantata.  Composed in 1985, it is scored for Soprano and Tenor Solo (representing the Bride and Groom respectively), a children’s (SSAA) Chorus (“the daughters of Jerusalem”) and a mixed (SATB) Chorus (‘the woman’s family’).  Vella’s composition is a web of word-painting, where every mood, every image is captured in sound – from the delicate queries of the children seeking the groom, to the heavy rhythmic punches of the choir declaiming that “many waters cannot quench love” and “awake north wind and come down south”, and the beauty of the last chorus which, on the advent of Spring, beckons the bride to “rise up” and “come away”.

The bulk of the difficulty lies on the soloists, particularly the Soprano.  In her four interjections, the soprano sings wonderful lyrical lines of ethereal beauty while the writing for the Tenor in his two solos is of a stronger, more robust nature.  In both cases, the writing covers the extreme ends of the vocal spectrum and, both tonally and dynamically, is very demanding.  Such is the identification of text and music that the verbal images are metamorphosed into sound. The garlands which are strewn across the poem, and the cascades of water that tumble down torrentially, whether they be secular or sacred, physical or metaphysical, sexual or spiritual, become an enduring symbol for a paradoxical bondage that leads to freedom. Throughout, Claire Debono gave a most accomplished performance, nuanced and subtle, passionate but controlled.  Her very beautiful voice, rounded and lush was ideally suited to this work and she tackled its various difficulties with ease.  She is an intelligent singer who coped comfortably with the treacherous difficulties, runs, and reaching to the upper reaches of the vocal spectrum.  Tenor Paul Patinka came across as a rather weak counterpart.  Musically he was very sound, pitch perfect and rhythmically most secure, but the quality of the voice did not quite rise up to the occasion.  (Later we came to know that he was suffering from a cold).

Symphony no. 3 ‘The Apocalypse Verses’ is one of Vella’s great works, both in scope, range, and breadth.  Joseph Vella was working on his third symphony right through the winter months of 2002/3, mostly during the weekends which he spent in the peaceful and relaxed atmosphere of the fishing village of Marsalforn, Gozo.  In fact, the manuscript of the symphony was finished on the 8th of March in Marsalforn.  When the idea of writing a musical work to coincide with the special celebrations that the Basilica of Saint George in Victoria was preparing for the July festivities of the Patron Saint of Gozo was first discussed, the organising committee was toying with the idea of commissioning the composer to write an oratorio-type work highlighting either the life of the Saint or else the workings of the parish with particular reference to certain incidents from the life of Saint George.  In fact, the committee suggested that Vella writes a work on the lines of his previous oratorios, namely, Rebbieħa, Rewwixta, Demm fuq il-Verna, etc.  In due course, the composer decided to opt for a composition that was to be neutral in its boundaries but at the same time, and because of this, would express universal values that would make the work relevant not only for the particular occasion for which it was to be composed, but also for any audience at any subsequent time and place.  Thus was born the idea of writing a major composition in the format of a symphony.

When Joseph Vella conceived of the structure for his Symphony, he felt that the leitmotivic idea running through the work could be that of the eternal triumph of good over evil, so well-illustrated and expressed in the story of the life and deeds of the Patron Saint of Gozo – Saint George of Lydda.  With this in mind and to better highlight and crystallise his intended notion of universality, Vella opted to include in the work a text, which itself was to be neutral in its origin and language medium – hence the choice of a selection of passages from Saint John’s Apocalypse, together with the use of Latin.  The Symphony was premiered on 14 July 2003.

For the composer, the inclusion of a text of course meant the use of some kind of a vocal/choral force.  With this in mind, the idea of referring to the Apocalypse was further pursued to include a Tenor Solo (representing Saint John the Evangelist) together with both an SSA chorus and an SATB one (at various stages representing the Angels and the Saints).  The composer thought best to reserve these forces for the last movement of the work, mainly for the climactic sections.  However, the Apocalypse connection was even further expanded by the decision to head each of the projected five movements of the Symphony with an epigraph from Saint John’s work to be used as its driving motto.  All these ideas led to their natural conclusion, namely, that of sub-titling the Symphony The Apocalypse Verses.

From a purely musical angle, however, the Symphony is completely abstract in conception, and the resultant headings growing out of the chosen quotes (i) The Conflict; (ii) The Invocation; (iii) The Blessing; (iv) The Yearning; (v) The Awakening, are not there in any programmatic sense.  The expression of spiritual values, rather than story-telling, was first and foremost on the mind of the composer.  In this regard, for Vella the opening fanfares and trumpet calls of the first movement of the Symphony (It-Taqbida – The Conflict) are more pertinent to the scene of the Last Judgement than, say, to any battlefield.

The first three movements followed each other without a break.  In the first movement (It-Taqbida – The Conflict) the brass and the percussion were very much in evidence, together with some unison writing for the strings.  The cor anglais and, particularly the solo viola, so beautifully played by Nadia Debono, gave the second movement (It-Tnehida – The Invocation) its unique evocative character.  A short passage on the violoncellos led to the third movement (L-Għotja – The Blessing) where a short, easily identifiable theme keeps made its appearance in-between sections featuring both woodwinds and strings.  The fourth movement (Ix-Xewqa – The Yearning) was very forceful both in its melodic/harmonic and rhythmic drive. The basic (3/8) subdivision that one generally comes by in the symphonic Scherzo, was liberally interspersed with 4/8, 5/8, and 6/8 to make of this movement as continuous a spectrum of kaleidoscopic sounds and rhythms as possible.

For this last movement, (Is-Sebħ – The Awakening), Vella used the Gregorian melody of the Sanctus from the Missa de Angelis as one of his main building blocks.  Its harmonisation is very typical of the composer’s style. For this performance, tenor Joseph Mercieca was perfectly suited to tackle the fiendishly difficult part ascribed to him.  Possessing a wonderfully rich voice, with easy high notes and a dark baritone quality in the lower ones, he gave a most creditable performance.  Also, the Laudate Pueri Choir once again joined forces with the University of Delaware Chorale to give a most resounding rendition of yet again a most difficult piece.  It was a full-bodied sound, crystal clear cutting through the orchestral fabric like a laser.

The strings’ playing in their upper registers introduced it at the very beginning until it built up into a big climax on the tutti orchestra with outbursts of Sanctus, Sanctus, Sanctus from the chorus.  A short reference to the melodic material from the third movement led to the first Tenor solo (John the Evangelist) after which, in a lighter mood, the Angels (SSA chorus) made their substantial intervention.  This was followed by a second solo for Tenor.  An orchestral interlude in fugal style introduces the whole chorus (SATB – Angels and Saints) on the words Dignus es.  The same fugal material was used to propel the music towards the Grandioso, at which point the second important idea of the movement was introduced.  After the Tenor made his third solo intervention, this time interspersed with comments from the chorus, the music moved on to its final invocation and assertion of celestial glory on the words Sanctus Domine Deus Omnipotens.  Amen.

The Malta Philharmonic Orchestra, led by Reggie Clews, and directed by Joseph Vella, rendered both works impeccably, with a fine balance maintained throughout. Particular mention goes to the brass, especially the horns, whose cultured sound was a joy to hear, and the complex percussion section that acquitted itself admirably.  Strings were full-bodied and rich, while the woodwind were poised and lovely throughout.  Conductor Joseph Vella brought all his experience, intelligence, and vision to two works of his that are a legacy to the rich opus of works not only in Malta but much beyond.

The end result was a concert of tremendous intellectual, force, beauty, magnitude, and power. The thunderous applause that greeted the final declaimed ‘Sanctus’ was an eloquent testimony on the part of an admiring audience. 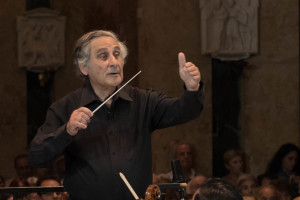 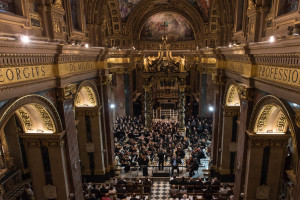 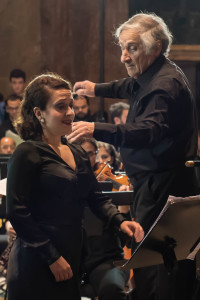 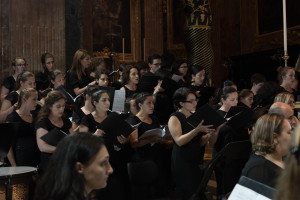 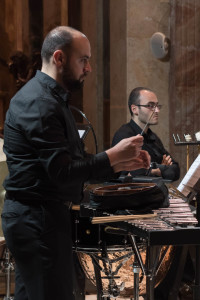 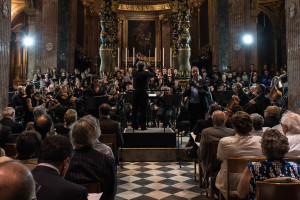 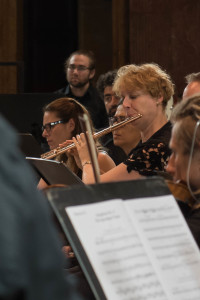 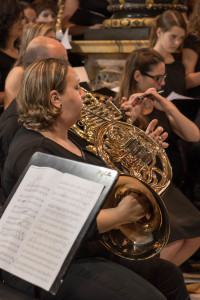 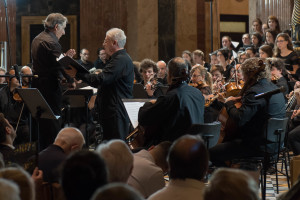 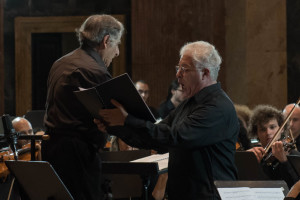 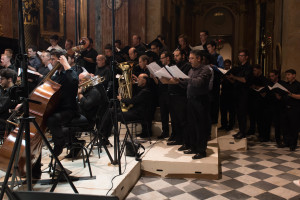 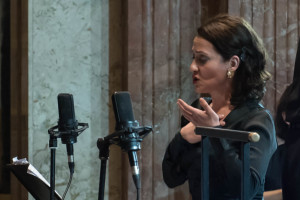