The third concert in the Baroque series that the Victoria International Arts Festival offers its patrons every year was given by Maltese Ramona Zammit, proficient not only on the harpsichord but also on the piano and flute as well.

Ramona chose a programme that virtually gave the audience a whistle-stop tour of Baroque music in Europe.  From Byrd to Handel, Peerson, Bach, Marcello, and Rameau, we were regaled with carefully-chosen examples from England, Germany, Italy, and France, surely among the best-ranking Baroque masters in the repertoire.

Starting with Byrd’s The Bells, Ramona gave a brief overview of the work and the composer, the cultural and historical dimension and the style.  In fact, throughout the concert, Ramona delivered very short but informative information about the pieces she was performing.  In The Bells, Byrd seeks to resort to word-paining, in the sense that the intention seems to be to elicit graphically the sound of ringing bells.  In fact, the work started on a single note and developed to a full carillon that was beautifully brought out on the harpsichord.

Handel’s The Harmonious Blacksmith is a very well-known and well-liked piece.  If there is an archetypal Handel keyboard suite, it is the E major Suite put together by Handel on The Harmonious Blacksmith.  Like most of the other Suites, it is in four movements, and, like most of the other suites, those four movements are predominantly stylized dance movements preceded by a Prelude.  This is a beautiful and beguiling work fully at the level of Bach’s best keyboard suites.  Unlike Handel’s other Suites, this work (published by the composer himself, in London, in 1720) is frequently performed.  Or, more specifically, its last movement is still frequently performed: as lovely as the graceful opening Prelude, the fine-boned Andantino Allemande, and the porcelain-skinned Allegro Courante, the closing Air con variazioni is what guarantees the Suite in E major immortality.  Obliquely based on the English folk song ‘Four Days Drunk,’ but far better known by its title The Harmonious Blacksmith, the air and five variations is quintessential Handel: Ramona performed it in style: sturdy and supple, elegant and powerful, lyrical but virtuosic.

Next came two delectable pieces by Peerson, a rather obscure English composer of the seventeenth century.  These were ‘The Fall of the Leafe’ and ‘The Primrose’.  These are picture pieces, conjuring up images of a benign and graceful nature.  The dynamic level hardly ever rose above a mezzo piano and both works contrasted beautifully with the more robust Handel piece and the following Bach Suite no. 5 in G Major .  Typically Bach, with obvious signs of the monumental structures he is so capable of, this work is in seven short movements, all of them dance forms with their idiosyncratic characteristics and style.  Ramona performed with aplomb and panache, bringing out the vigour of the faster movements while exuding moments of tenderness especially in the Sarabande.

Marcello’s  Concert no. 3 in D Minor is a three-movement work, and while it does not reach the ominous heights of a Bach work, this was a charming piece that fully brings out the technical abilities of both performer and instrument.  The concert finished with two very witty and lovely pieces by Rameau, the great master of French Baroque.  One may say that Rameau is to French Baroque what Bach is to German Baroque.  ‘La Poule’ and ‘La Daughine’ are full of mirth and merriment, bringing in a light-hearted mood to bear on the music.

A very enthusiastic applause greeted the end of this most enjoyable concert! 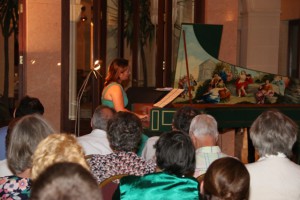 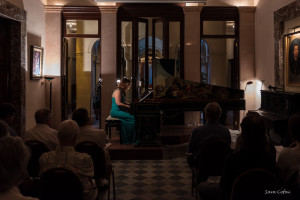 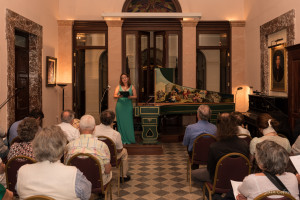 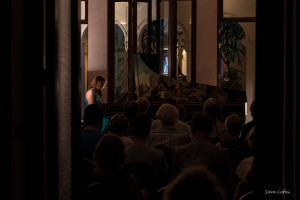