On Saturday, VIAF hosted the Oxbridge Organ Duo made up of Benedict Lewis-Smith and Julian Collings. This was the first concert of its kind on Gozo where audience heard (and partially saw) two organists playing four hands on one organ. This is a style that one more readily associates with pianoforte playing. In fact, as Ben wittily said in a brief introduction, it is not just four hands but four feet as well.

The concert started with a charming piece by Thomas Tomkins, A Fancy for Two to Play. This was played on the Santucci Baroque organ housed in St George’s Basilica. The sound, coming from the organ loft, gave a wonderfully authentic tone that attests to the excellent condition of this organ. The piece had antiphonal and canonic effects, with the upper register leading the way almost throughout the whole piece. This was followed by a solo work performed by Ben, while Julian made his way to the choir to prepare himself to perform on the big organ. Ben played a Frescobaldi work, one that shows the Baroque master’s supreme command of counterpoint and chromaticism in his harmony. Despite the piece not being on a grand scale, one nonetheless could feel the dramatic inventiveness that one normally associates with this Italian Baroque composer.

Julian then performed on the big organ and his work, a Mendelssohn piece, had all the characteristics that are part and parcel of a late eighteenth-century work. There was more tonal and dynamic variety and although the piece did not fully exploit the full range of an organ, yet it was evident that we were moving closer to our time.  Two Fugues for four hands (and four feet …) followed, one in C Minor and the other one in D Major.  The musical understanding between the two performers came to the fore here – a Fugue is a treacherous work at any time, and a Fugue for two performers does not make things easier, one would rightly guess.  Well-coordinated, well-articulated, with scrupulous attention to detail, these two works also showed Mendelssohn as a great organ master apart from him being known as a symphonist and composer in every other conceivable genre.  The C Minor Fugue came across as sedate in temperament, grandiose and majestic, carefully constructed and making regular use of pedal points.  The D Major Fugue was more flowing and light-hearted in texture and mood.  As the exposition developed into the episodic section of the piece the counterpoint became more complex and dense, with both the pitch and register rising to create a cumulative effect that contributes to the increasing emotional intensity of the piece.

Samuel Wesley’s Duet for Organ is structured in the style of a concerto, with a lively first movement followed by a quiet second one and ending with a flourish on a Fugue.   The Allegro started rather quietly, developing into a more robust and busy piece as the movement developed, after which there was a reprise of the initial melody against a richer harmonic basis.  There was plenty of fast finger work that was extremely clear, sharply defined and well-articulated.  Towards the end of this movement, the dynamic range increased considerably with the ripieno giving that glorious sound one associates with a full organ.  The second movement is an Andante, a piece of contemplation and meditation which is in stark contrast to the two outer sections.  It made use of the quieter registers, most notably the flutes.  The exchange between the two players was charming and playful, never exuberant or extravagant.  There was an attempt at creating a chorale-style section towards the end of this second movement but these hints then dissolved into a more light-hearted encounter between the performers.  The final movement, a Fuga, started assertively using the reed registers, and rose chromatically as the dynamic range broadens and intensifies.  This was a most complex contrapuntal work where the voices moved in and out of different registers and pitches.  The work ended on the militaristic sounds of the organ, with full assertion and command on the final chord after a trumpet-like declamation on the middle C.  A very fine interpretation, indeed!

William Byrd needs no introduction.  Arguably, he is the greatest ever English composer, making his mark not only for his choral polyphonic works but for his magnificent output for the organ. The Fantasias for Harpsichord stand as a testimony to Byrd’s greatness as a composer. The form, Fantasia, was just being adapted for keyboard in Byrd’s youth, from lute and consort music, but with him it became the supreme showpiece of the keyboardist’s art.  Opening fugal passages give way to increasingly lively homophonic, dance-like sections, and these finally yield to idiomatic displays of virtuosity that were lacking in earlier models. They often end with joyful canons in triple time that tap into deep roots leading back to the earliest known piece of English secular music, the thirteenth-century Sumer is icumen in.

The Hexachord Fantasias, of which the evening’s Ut Re Mi Fa Sol La forms part, are a special category. Here, the six-note scale of medieval music theory is used as a cantus firmus, running up and down in long notes throughout the piece.  The five-voice opening was of unparallelled contrapuntal density, the zig-zags fitted together like an intricate clockwork in every conceivable configuration, a procedure found in Frescobaldi’s Fantasias, which the Ferrarese showed to “the most prominent musicians” in Brussels in 1607.  These would have included Byrd’s former pupil Peter Philips, one of many English Catholics who fled to the Spanish Netherlands.  The theme then appeared in long notes, sometimes in two strands at once, against counterpoints that seemed a throwback to an earlier generation.  For that reason, most authorities consider this a youthful effort, but there is mastery here that goes far beyond Byrd’s early cantus firmus exercises in the style of Tallis and Blitheman.  The notation in quarter-note beats, the division into clearly separated variations, and the unique late source all point to this being the last of the Fantasias.  In this work, Ben and Julian further consolidated their excellent reading of a score that is a test piece for any well-established performer!

Following Byrd’s work came Carleton’s A Piece for Two to Play, musically and technically an unremarkable work that serves as a respite in between bigger pieces.  The concert came to a close with none other than an arrangement of Stravinsky’s The Firebird, of which the ‘Berceuse’ and the ‘Finale’ were performed.  From the ballet, Stravinsky extracted three concert Suites.  The first one used original orchestration and ended with Katschei’s ‘Infernal Dance’.  A second one, in 1919, created in Switzerland for conductor Ernest Ansermet for standard-size orchestra has the ‘Infernal Dance’ midway, followed by ‘Lullaby’ and the original finale.  In 1946, Stravinsky fashioned a third Suite with additional materials from the ballet, to renew his copyright, but it never caught on.  The 1919 Suite begins with the Firebird’s capture.  ‘Khorovod’ follows, a round-dance by the princesses, then Katschei’s arrival and wild dance.  Firebird’s seduction of him in ‘Berceuse’ sets up the sonorous, pageant-like final tableau.  This was performed with all the pomp and circumstance that attends to such a work, grand and grandiose, with a full organ at the end that captured the magnificent final tableau of the ballet.

A well-merited resounding applause greeted the performers at the end.  We look forward to hearing the Oxbridge Organ Duo again! 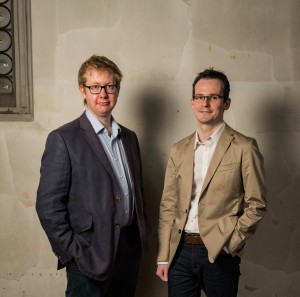 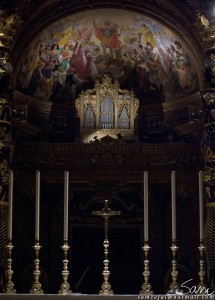