On Wednesday 3 July we had the Mythos Trio from Italy, an ensemble that is made up of Giuliano Cavaliere (Violin), Rina You (Violoncello), and Marios Panteliadis (Pianoforte) – which makes them an Italian, a South Korean and a Greek!

In the three Trios they performed, namely, by Rachmaninov, Tailleferre and Shostakovich, there was a quality of delicacy and refinement that marked their performance from start to finish. The violin and violoncello complemented each other admirably and one could see that although the pianist is a soloist of the first order he was more than up to the challenge of merging with the other two instrumentalists.

Rachmaninov’s Trio elegiaque was characterised by a robust and virile tone, one full of pathos and melancholy the profundity of which is surprising when one remembers that the composer wrote it when he was only nineteen years of age!

Germaine Tailleferre was the only woman who belonged to the famed Les Six in France in the first half of the twentieth century. This Trio is a truly lovely work, one not without the influence of Debussy with its pastel hues and fluid, flowing texture. From the depths of Rachmaninov the Mythos Trio had no difficulty at all shifting style to one that is characterized by delicacy and refinement.

Shostakovich’s Trio in E Minor op. 67 no. 2 is a work of massive proportions. Architecturally it resembles a huge edifice which gets built stone by stone until at the end you are faced with a monument of classic proportions. Scaling the highs and lows that are associated with this particular work, which is almost programmatic in its depiction of the appalling suffering of the Jews in the Holocaust, the performance sailed through with confidence and panache.

Mythos Trio acquitted themselves admirably and one hopes for more such performances from them in the near future! 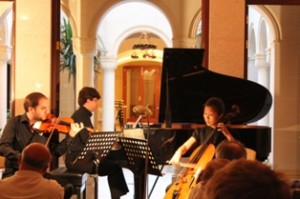