Musica Poetica London is not a newcomer to the Victoria International Arts Festival. They are a highly esteemed ensemble from London, whose area of expertise is the Baroque. For those of us who have had the privilege of attending their concerts, we know what a refined and sophisticated performance they always give us, so, we are now once again looking forward to their concert on Thursday 23 June, which augurs a special and unique experience.  Entitled ‘That Stupendous Bass’, the concert will explore music written for or inspired by the Reverend John Gostling, once described by diarist Samuel Pepys as “that stupendous bass”.  With Oliver John Ruthven on the harpsichord, Kate Conway on the viola da gamba, and Christopher Webb as “that stupendous bass”, we are in for a most exciting evening!

The programme includes works by Purcell, Jeffreys, Simpson, Lawes, Blow, Locke, and Leveridge.  The concert will be in the Aula Mgr G. Farrugia, and starts at 8pm

Christopher Webb is an English bass who has been acclaimed as “commanding and alluring” by Early Music Today for his recent performance as Giove in Cavalli’s La Calisto (Hampstead Garden Opera).  He is establishing himself as an assured interpreter of early opera roles.  Recent projects have included Andonis (Blow, Venus and Adonis – Opera Lyrica: “[he] excels” Fringe Opera) and Melisso (Handel, Alcina – Musica Poetica London.)  Christopher is a graduate of Cambridge University, where he sang with the Choir of Clare College and the University Chamber Choir.  He has appeared as a soloist under Sir Roger Norrington at St John’s, Smith Square, London, and live on BBC Radio 3 with the Academy of Ancient Music.  He now sings with a number of professional vocal ensembles in London and across the U.K.  He has recently completed a series of projects with the Zürcher Sing-Akademie, based in Tonhalle, Zurich, including concerts for the World Expo in Milan.

Musica Poetica London has been praised for its “constantly upbeat brilliance and dynamism” [Bachtrack.com], and is quickly gaining a reputation for energetic and communicative interpretations of repertoire from Monteverdi to Mozart, performed on period instruments.  Originally formed as a quartet at the Royal Academy of Music in 2010, the Ensemble has presented concerts in settings ranging from the Cadogan Hall, to Upstairs at the Gatehouse, and appeared at the Brighton Early Music Festival under the 2012-13 Early Music Live! scheme.  They have enjoyed master classes and coaching sessions with Rachel Podger, James Johnstone, Pavlo Beznosiuk, and Laurence Cummings.  Musica Poetica London currently performs as a Trio, and in this incarnation focuses on French Baroque repertoire and the music of seventeenth-century Germany, exploring works from the stylus phantasticus for violin, viola da gamba and harpsichord.  Individually, the members of the ensemble have played with groups such as the European Union Baroque Orchestra, Charivari Agréable, and the English Baroque Soloists, and have worked under directors including Lars Ulrik Mortensen, Christophe Rousset, Riccardo Minasi, and Sir John Eliot Gardiner. 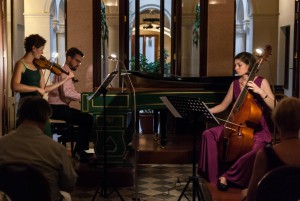 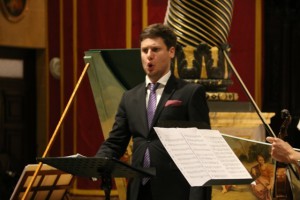