The last concert in the mini-series of Baroque concerts organised as part of the Victoria International Arts Festival featured Maltese pianist Joanne Camilleri in the Herculean task of interpreting Bach’s massive Goldberg Variations.  This was certainly not a concert for the faint-hearted – the most robust can wilt under the towering weight of a Bach work. When that work is the colossal Goldberg, well …

Joanne Camilleri is physically petite but there is certainly nothing remotely fragile about her, physically, intellectually, or musically.  This was one great performance that rounded up the Baroque series with a flourish.  Hers was one formidable interpretation and did credit to this wonderful work.  Once again, Aula Mgr G. Farrugia was packed with enthusiastic patrons.

Approaching Bach through his instrumental music the discerning listener is awe-struck by the geometric marvels of the severe architecture of his music, which is beautifully tempered by a tender poetry that emanates from the wonderful melodies and meticulously elaborated ornaments of the towering structures.  When the attention turns to the source of this poetry, the listener sees the walls and columns of an architecture whose order and logic seem to be unalterably constant.  The critic is humbled by the unlimited resources and knowledge of the metier, and searches feverishly for the outlets through which pour the broad stream of faith, longing, and exaltation.  Yet, he too is misled by the dual unity of absolute mathematics and absolute poetry.  A surgical dissection of Bach’s work discredits the very concept of art.  A true appreciation of his opus should lead the listener to the aesthetic quality behind the seemingly severe structures.   Bach offers one of the most remarkable cases in cultural history of isolation from the general artistic tendencies of his time.  This is the more striking when contrasted with contemporary Handel’s enthusiastic espousal of the Zeitgeist.  Bach’s art rests on the traditions of the German Reformation, which reaches its highest manifestation in him.  He belongs in the company of Gryphius, Fleming, Milton, and the great religious figures of the House of Orange, at the same time surpassing them all (with the possible exception of Milton) by the freedom and imagination with which he can abandon himself to human feelings.  Bach clung with all his faith and sincerity to Protestantism, but he had no use for the denominational quarrels, for the dogmatic discussions, under which Protestant Germany suffered.  To him, the only living things in religions were its positive forces as manifested in its art.  Since the Pietists opposed all church music with the exception of the spiritual songs, it is natural that among Bach’s Cantata text writers there were no Pietists.  Still, while avoiding Pietism whose negativism towards life he must have abhorred, Bach was deeply interested in reconciling the rift between the orthodox doctrinaire Lutherans and the popular PIetists; it was for this reason that he collaborated with Georg Christian Schemelli, the editor of a popular spiritual song-book, contributing several original melodies and rearranging others.

The thematic material for the Goldberg Variations (the opening aria) is the bass line of a Sarabande from Bach’s Anna Magdalena Notebook (1725).  The aria is followed by 30 variations after which the aria is repeated unaltered.  The variations can be divided into three groups: character (dance) types, playful and figurative variations, and canonic.  The final quod libet (Variation 30) is a combination of all three types.  The quod libet quotes two existing themes – “I’ve known you for so long” (a Saxon tune) and “Cabbage and turnips have driven me away,” an Italian bergamasca used by Girolamo Frescobaldi in his Fiori Musicali (1635), the score of which Bach owned.  The 30 variations are by turns dance like, austere, and eloquent.

The basic harmonies and structures of the variations are all the same as the theme’s.  The work exemplifies Bach’s quest for the greatest amount of diversity within relentless unity (a visionary European, perhaps!).  The Goldberg Variations are among the most sophisticated works ever written for keyboard, and the work does sounds like the awesomely complex compendium that it is.  The music is deceptively simple and heartfelt, with a noble calm even when the performer is obliged to cross hands at lightning speeds.  It never seethes or gets gritty, and is, of course, never boring.  The aria theme is subjected to ever-new means of contrapuntal manipulation.  Every third variation is a different kind of canon.  Joanne tackled the undoubted technical difficulties with ease, and she dealt with the music with the respect a seasoned and mature performer does.  She sailed through the rippling triplets, the cascading notes, and the frenetic criss-crossing of hands, and tenderly dealt with the quieter variations. The contrapuntal texture was never murky or remotely clouded, articulation was impeccable and phrasing impressive.  She breathed with the music and the music responded faithfully.

The Goldberg Variations is music of deep humanism, optimism, and intellectual complexity.  This is music that speaks to us ever more powerfully in troubled times.  It is sublime and compassionate, graceful, warm, and relentlessly intricate, a demonstration of unmatched craft in music history and genuine, poetic imagination.  The Goldberg Variations is a magnificent work that still engages scholars hundreds of years after its publication and is equally valuable for attracting new listeners to this sort of music.  It is not only a testament to the apotheosis of the Baroque period in all its complexity and diversity, but also the greatness of Bach who, from one relatively simple theme weaves a complex of 30 variations that are all of them new, yet definitely emerging from the old; proving the old adage that the old needs the new for its regeneration while the new needs the old for its sustenance.  It is a work that defies mortality.

The sincere and warm applause that greeted the final reiteration of the main theme persuaded Joanne to perform the second movement of Bach’s Italian Concerto as amost welcome encore.

Certainly a resounding ending to the Baroque series of concerts VIAF presented this year. Together with Le Jardin Musical and Musica Poetica London, this concert branded this year’s series a memorable one indeed! 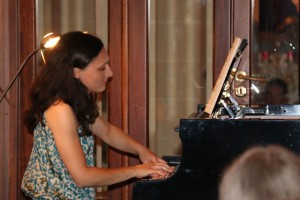 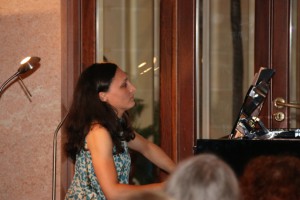 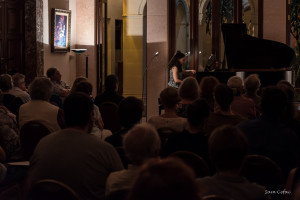 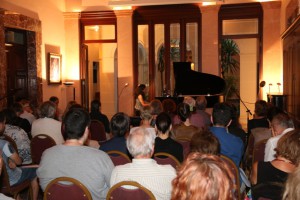 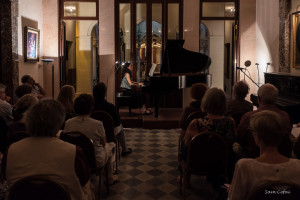