VIAF’s 2020 23rd edition, held in honour of Mro Joseph Vella, proudly announces one of many fringe activities it has organised this year. To celebrate the 250th anniversary of Beethoven’s birth, a vocal master class will be given by leading Maltese soprano Miriam Cauchi. Ms Cauchi will mainly but not exclusively focus on the approach to opera and Lieder, highlighting the nuanced differences in the interpretation of both genres. Special attention will be given to Beethoven’s setting of Schiller’s ‘An die Freude’ in his 9th Symphony (Choral).

Miriam Cauchi is a household name and has performed extensively in most of the important productions happening locally over the past twenty-five years. After graduating with full honours from the Sofia State Music Academy, Bulgaria, under the tuition of Prof. Blogovesta Dobreva in 1997, she furthered her studies with Juliette Bisazza Zanni and Magda Olivero. She is the recipient of the Gheorghi Slatev Cherkin Competition and the Bulgarian XIV National Competition Svetoslav Obretenov. Miriam knows her roots at the Victoria International Arts Festival and has been a regular performer in past editions both as a recitalist and also in orchestral works, avidly performing works by the late Mro Joseph Vella, notably Dust on the Path op. 138, and Kant ta’ Mara op. 112.

Miriam is a major ambassador of Maltese vocal music, singing and recording important compositions by Abos, Camillieri, Diacono, Isouard, Vassallo, Vella, and Zerafa.  She has lately released another CD – Miriam Cauchi: Riflessi – Art Songs from Malta.  On the 13th December 2009, Miriam Cauchi was appointed to the National Order of Merit – M.O.M. www.miriamcauchi.com

An added interesting feature to this unique master class is the participation by Snezana Nena Brzakovic, a Serbian mezzo soprano who studied opera and Lieder as well as pedagogy in Belgrade, Serbia, and Berlin. Ms Brzakovic continued her artistic training in Berlin and also specialised in functional breathing technique for singers and wind players, graduating with honours. She regularly works with world-leading conductors, most notably, Zubin Mehta, Daniel Barenboim, Sir Simon Rattle, among others.  Her successful students work in opera houses such as the Staatsoper and the Komische Oper – Berlin, the Bolshoi Theatre – Moscow, the Metropolitan Opera, La Scala, and others.

The master class will be held at Studio Theatre, 81 Old Mint Street, Valletta. Due to social distancing constraints, the venue can accommodate only 25 people. Those interested please write to the organisers on [email protected]

As with all VIAF events, the vocal master class will be free of charge to both attendees and participants.

This event will also be transmitted live online on VIAF’s Facebook page and on youtube.com/VictoriaInternationalArtsFestival  It is sponsored by the Valletta Cultural Agency, with the full cooperation of Teatru Manoel. VIAF’s main sponsor is Arts Council Malta. 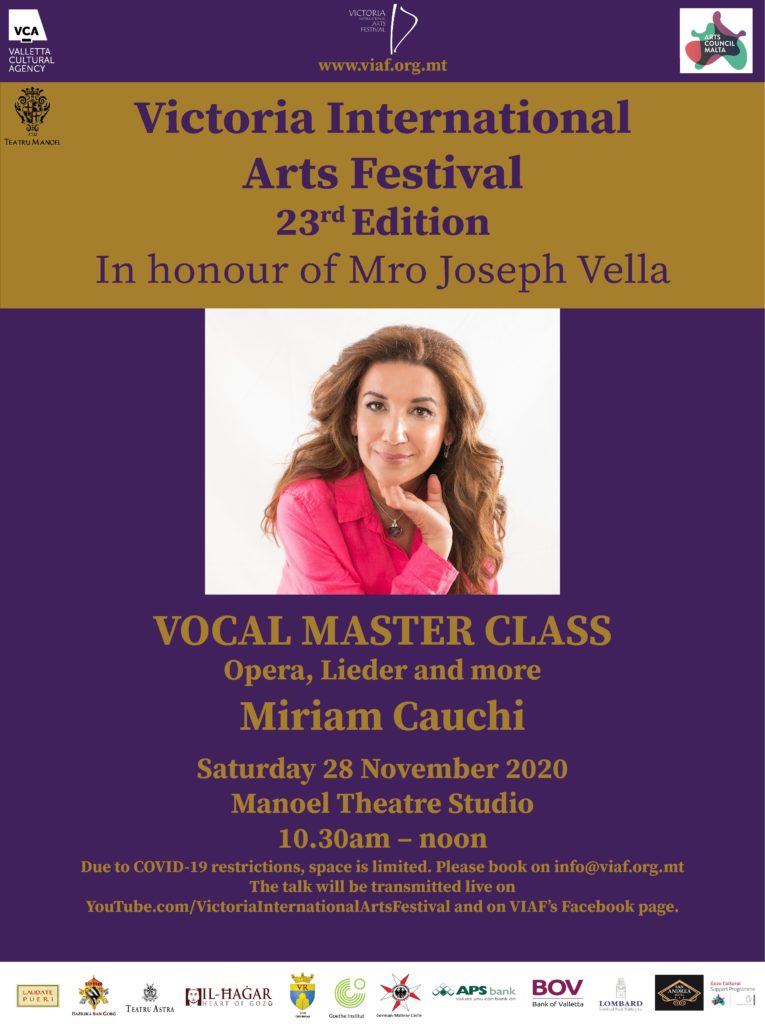