Victoria International Arts Festival consists of concerts that are diverse and multi-varied.  It also commits itself to asking top-notch musicians to perform, be they foreign or local.  On Wednesday 4 July, a packed St Francis Church was regaled to a highly eclectic and wonderfully executed programme of work for violin and harp by two of Malta’s most refined musicians, namely, violinist Maria Conrad and harpist Caroline Calleja.

The programme was intelligently devised in that it consisted of works originally written for these two beautiful instruments rather than opting for adaptations of works originally composed for other combinations of instruments.  The concert started with a Sonata by Gaetano Donizetti, actually one of his very few chamber works.  This work is built on just two movements, the first being a Largo – a practice that is more reminiscent of Baroque Trio Sonatas than the later Classical and Romantic ones which tend to start with a fast movement.  The moment the harp started the piece with rippling chords and a brief introduction, one was immediately reminded of the glorious bel canto arias such as one finds in Lucia di Lammermoor, for instance, most notably ‘Regnava nel silenzio’ in Act One.  The writing for violin is utterly ravishing and Maria Conrad fully exploited all the dynamic and tonal possibilities of it range.  One could hazard a guess and say (or write, as in my case) that Donizetti had the singing voice in his mind.  The audience could breathe with the phrases as if one were singing them.  The mode fluctuated from minor to major following the natural flow of the feeling.  Few wrote more beautiful tunes for the soprano voice than Donizetti and Bellini, and this slow movement could readily be set to words and sung.  Contrastingly, the Allegro tripped along gaily.  It was full of what one would call coloratura which asked for articulation and impeccable control, and both performers did not disappoint.  Both instruments engaged in a quaint and charming dialogue that never distressed or ruffled the smooth surface of a summer sea.  A soothing and glorious work to start a performance with!

John Thomas’s Romance followed.  John Thomas was a Welsh composer and harpist active in the late Romantic period, better known as the Victorian age, in England.  Again, this was a wonderful little piece whose melodic interest lay mainly on the violin.  The melody came across as simple but never simplistic with beautiful phrasing, and the melodic contour was subtly varied when the harp took over the melodic line after engaging with open arpeggios at the beginning.  Towards the middle, harp and violin shared the melody and move in thirds.  The form is an ABA but with the reprise, the harp varied its accompaniment, which became more complex and elaborate.  Harmonies were piquant, especially with the introduction of a Neapolitan sixth in the final bars.  The general feeling of the piece was one of calm, mildly nostalgic and endearing towards the end.

Deux Préludes Romantiques op. 17 by Marcel Tournier came next.  After four rippling chords, the violin made a sober and rather solemn entrance with a slow melody which was then repeated against a more prominent accompaniment from the harp.  This movement gained slight momentum and emotional intensity as the piece unravelled and just before the reprise of the first melody could be heard again.  Tournier’s penchant for strange-sounding chords in what is generally a traditional harmonic texture added colour and emotional vibrancy.  The second movement contrasted in both speed and mood.  Busy finger-work on the harp supported a more undulating melody on the violin.  This second section generally developed on intricate and increasingly more decorated melodic line. What was impressive was the equitable balance maintained throughout: melodies were shared, harmonies were employed to support the singing line, and the tonal colour blended seamlessly throughout.

Saint-Saëns Fantasie op. 124 is a work of considerable technical and musical difficulty which can test the mettle of an seasoned performer.  Again an original work composed for violin and harp, it stretches close to 15 mins duration and one can easily be alienated unless it is performed in the most interesting of ways.  To say that the audience’s attention was riveted on the performance would be an understatement, such was the variety of colour, tone, and dynamics that Maria and Caroline brought to bear on their interpretation of the work.  In four sections, the delicacy of the piece exemplified the composer’s developed ideas on clarity.  The first section showed a clear division of work, as it were, between the instruments as the violin played a single melodic line over arpeggios and broken chords on the harp.  Although rigorously organised, the section had an improvisatory feel to it.  In the second section, the violin part was less melodious, with frequent, aggressive double-stops, while the harp accompaniment took on a heavier pulse and pentatonic passages.  A more equal exchange between the instruments marked the third section, in which the violin and harp at first followed one another.  Later, the violin sounded low pitches, which the harp decorated in a fanciful manner, completely reversing the roles of the instruments in the first section and creating refreshing timbral contrast.  In the fourth section, the harp returned to its accompanying role, repeating groups of notes as the violin pursued invigorating lyrical outbursts.  Saint-Saëns closed the piece with a return to the opening melody and its accompanying texture. A veritable tour de force!

Jules Massenet’s Méditation (Thaïs) surely ranks among the most delectable of melodies.  Ethereal, sensuous, mystical — you name it, it’s there!  It was superbly performed, with Maria carrying the gorgeous melody to soaring heights.  Intonation was impeccable and the dose of emotion poured into the phrasing was just right, neither overbearing nor lacking.  Caroline’s accompaniment was solid, attentuating, and beautiful.  This work was followed by Jean Sibelius’ Novellette op. 102 no. 1, a work which is characterised by adventurous accompaniment on the harp, against which the violin was thrust immediately into late-Romantic melodic and harmonic textures that were bold, assertive, and confident.  This was a bravura piece that tested the technical and musical mettle of both performers.  It also reminded listeners why his Violin Concerto is such a memorable work – Sibelius’ writing for the instrument is exciting, intriguing, and beautiful.

Bernard Andrès’s Algues, a work consisting of seven distinct pieces, is almost pictorial in theme and style.  Presented as small but perfect miniatures, the work had the fluidity and liquid beauty one associates with watery textures.  In fact, the title of the work means ‘Seaweeds’.  This composition consists of seven short but beautiful movements.  The first five tableaux fluctuated between the keys of G Minor and F Major but then the key of A Minor was used for the final two movements.  The harmonic texture bordered on the impressionistic and although the work is not programmatic in the sense that it follows a distinct narrative, yet the contours of gently rippling waves could be easily conjured up by the listener, not least by the undulating phrasing brought out on the harp.

The last piece was the perennially evergreen melody from the soundtrack Ladies in Lavender.  Performed with passion and gusto, this was a gorgeously ravishing piece to wrap up a wonderful recital with! 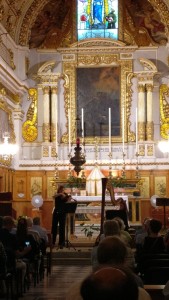 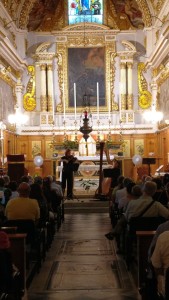 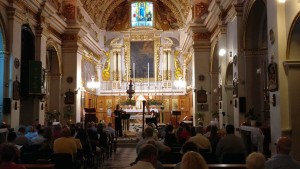