Thursday saw a double fare presented to eager patrons. At noon, VIAF hosted at very short notice the accomplished Chapel Choir of Oriel College, Oxford at St George’s Basilica. This was a fringe benefit and the choir, under the direction of Max Adachs, regaled a sizeable audience with the best in the polyphonic repertoire, from Palestrina to Stanford.

In the evening, the Festival‘s programme continued with a mesmerizing performance by very young guitarist Tormund Blikra Vea, who is this year’s prize winner of the Norwegian Music Competition for Youth. In fact, the first-prize winner of this august competition is awarded a performance in the Victoria International Arts Festival, further enhancing the profile and reputation of this wonderful Festival.

Presenting a classical programme in the sense that the young performer opted for Sonatas and large-scale works rather than ‘bis’ pieces that one normally associates with the guitar showed the intelligent choice of the guitarist. He kept the ‘bis’ piece for the encore, namely, a passionate Villa-Lobos piece that went down extremely well with the audience.

St James Church was filled to capacity. It is a small space, exquisitely lending itself to the nature of the instrument. Projection was natural and easeful, without the aid of any amplification. One could hear the slightest nuance of tremor and pianissimo dynamic effect throughout.

What was immediately evident in this performance was the guitarist’s extremely clean and clear articulation. The recital started with a Bach Sonata, namely, Sonata no. 1 in G Minor BWV1001. The Adagio came across as a wildly, but very elegantly, embellished progression of harmonies. All the embellishments – and embellishments mean not only little turns, appoggiaturas, and the like, but also whole melodic gestures, scales, and mall arpeggios – are written out quite carefully by Bach – the result was a work that might have sounded improvised but was most definitely not. The G minor Fuga was most compact and tightly performed, with the respective voices coming out most impressively. The Siciliana is a gentle movement in B flat major; the main melody was played in the lowest register of the instrument while a warm commentary unfolded in the upper register. The Presto finale was a moto perpetuo in sixteenth notes whose 3/8 meter had at times a hint of cross-rhythm to it.  This was most deftly and expertly tackled by Tormund.

Moreno-Torroba’s Castillos de España is a monumental work in the guitar repertoire. Flitting from one mood to another by ‘visiting’ different castles of Spain, from Northern Asturia to Southern Sevilla, this was a piece-de-resistance which was masterful, intelligent and technically most accomplished. While the contrast between contiguous movements was, by the very nature of the work, not always stark, they do alternate between moderately fast and slow. It is in the slower movements that Moreno-Torroba’s virtuosity at shaping rhapsodic, lyrical melodies manifests itself, and the evening’s performer took full advantage of this. He played with controlled passion, exciting dynamics and lovely phrasing. In the quicker movements, we could hear the rhythms that indicated this music to be unmistakably Spanish.

Catelnuovo-Tedesco’s Sonata for Guitar ‘Homage to Boccherini’ op. 77 is another big work for the guitar. Following the classical sonata four-movement structure, it opened with a highly chromatic and energetic first movement, somewhat in the tempo of a gavotte and based primarily around a rocking motif.  Although in the guitar-friendly key of D major, the piece used much barring for a sharper, less lyrical sound, further compounded by shifting meters. A long held dolce chord on the tonic led to the Andantino movement in G minor, wonderfully melancholy in nature though alleviated somewhat midway by an Allegretto section. Another long-held D chord, this time acting as dominant, led to the minuet, also in G minor. Here came a delightful nod to the age of elegance, the most securely tonal of the movements, with the Trio in the parallel major of G. Also less tonally ambiguous than the opening sections was the vivacious perpetuum mobile of the finale, which required great agility on the part of the player – accomplished with consummate ease; this was brought into contrast with a more chromatic alla marcia. An unusual progression of full chords finally nestled itself into a perfectly voiced final cadence.

The final work on the programme were three movements from William Walton’s Five Bagatelles. Tormund tackled the third, fourth, and first movements of this lovely and charming work. Wayward harmonies, quirky rhythms, and an elusive tunefulness characterized this piece and the guitarist performed it with virtuosity and the right extent of dynamic and tonal range.

Yet another wonderful performance in a wide diversity of classical concerts! 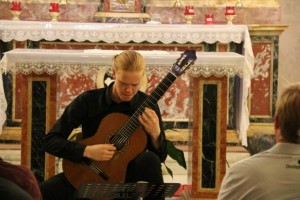 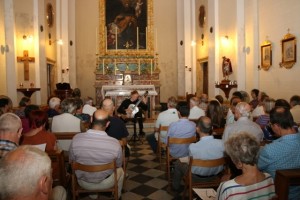 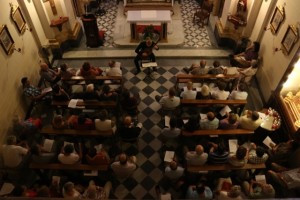