VIAF is extremely honoured to host the Magdalene College Chapel Choir of Cambridge University on Monday 20th June.  The concert is a lunchtime one, and starts at noon.

The Choir of Magdalene College Chapel, Cambridge, is made up of Choral Scholars and volunteers from Magdalene, as well as from other colleges in the university.  It sings two Choral Evensongs each week in the candle-lit Chapel, providing regular, sung worship in the College, which dates back to its origins in 1428 as a hostel for student-monks from Crowland, a Benedictine monastery some 50 kilometres from Cambridge.  It gives student singers an opportunity to perform many of the glories of the choral repertoire in their intended liturgical context.  The Choir is ambitious and has, over the past years, toured in South Africa, Italy, Malta, Sweden, Germany, Netherlands, and Belgium.  The Choir sings regular Choral Evensongs in U.K. cathedrals, including Westminster, St Paul’s, Salisbury, Ely, Norwich, Llandaff, Ripon, Chester St Edmundsbury, and Peterborough, as well as St Albans and Westminster Abbeys.  The conducting of the Choir is shared between its Precentor, Jonathan Hellyer Jones, a professional musician who for many years directed The Cambridge Baroque Camerata, a group which played music from the seventeenth- and eighteenth-century on period instruments, and by its Organ Scholars, Polina Sosnina and William Bosworth who are studying Natural Sciences and a PhD in Music. 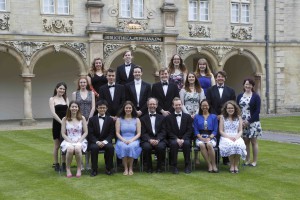 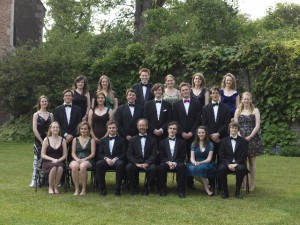