A highly professional French Trio, Les Cordes Marines gave a concert of rarely performed works at St Augustine Church on Sunday 1 July.  This consisted of pieces by Bonnal, Roussel, and Cras.  The ensemble, made up of Agnès Pyka (Violin), Blandine Leydier-Quincarlet (Viola),  and Armance Quéro (Violoncello), is an extremely well-coordinated, mature, and refined group — it was unadulterated pleasure listening to them playing.

The first piece was by a String Trio by Jean Ermend Bonnal, a French composer and organist who was active at the beginning of the twentieth century.  The Trio chosen for performance during the concert was almost programmatic in nature in that it followed a geographical space that the music sought to enhance and depict.  The first movement related to the river Bidassoa, which runs through the Basque country of Northern Spain and Southern France.  The music suitable followed the many intricate trajectories of the flowing river, with merging contrapuntal structures interweaving in and out of the melodic meandering.  The second movement, entitled ‘Navarra’, portrays a geographically diverse region in Northern Spain.  Despite its overarching melodic contours, the music stretched at the limit of representation through its beautiful, haunting melody on the viola together with accompanying rhythmic variety on the violin and the violoncello.  The last movement carries the sub-heading ‘Rapsodie du Sud’.  Without specifically denoting a precise location, yet the reference to the South triggered an ambience of colour, vigour and passion, beautifully enacted in the music’s fabric.  This was a wonderfully wrought piece that soared both emotionally and intellectually.  The Trio of musicians was so finely balanced that despite the obvious technical and musical difficulties encountered in the work they managed to weave a seamless tapestry of gorgeous sound and colour.

The second item on the programme consisted of Albert Roussel’s String Trio op. 58.  It is a three-movement work in the traditional paradigm of fast, slow, fast sections.  It is something of a paradox that as Roussel entered his last decade, the period of his most vigorous and intensely personal work, he was dogged by exhaustion and poor health. Pneumonia and jaundice over the winter of 1933-1934 followed the composition of his opera buffa, Le Testament de la Tante Caroline (1932-1933), while his final two years, graced with such spirited masterpieces as the ballet, Aeneas, the boisterous Rapsodie flamande, and the zestful Concertino for cello and orchestra, were plagued by bouts of angina pectoris.  He had just finished the wanly quirky Andante of a projected Trio for oboe, clarinet, and bassoon when he was struck down by a heart attack and died on August 23, 1937, leaving this evening’s Trio for violin, viola, and cello, composed over June and July 1937, as his last completed full work.  The high spirits of his previous music seem muted, recalled in lassitude, and served on wry, as it were.

The first movement, an Allegro moderato managed a deftly contrapuntal, and almost conversational, balance of the effusive and the pithy, while the Adagio was delivered as a prolonged meditation less sad than wistful, but accented with moments of stabbing poignancy.  The third movement Allegro con spirito was perhaps the most disturbing to the auidence, as the bounding Rousselian corybantic mode came only skippingly now, seemingly sketched, attenuated. It is almost neoclassical in style with the melodic line initially carried by the violin the upper regions of the tonal spectrum but the viola and the violoncello eventually picking up strains of the melody and developing it further.  This is a work that merits more performances for it surely ranks among the finest of chamber music pieces of the latter part of the nineteenth century.

The last Trio performed was by Jean Emile Cras, a twentieth-century French composer and career naval officer.  His musical compositions were inspired by his native Brittany, his travels to Africa, and most of all, by his sea voyages.  It is also worth nothing that as a naval commander he served with distinction in the Adriatic Campaign during World War I.

This ravishing String Trio, a four-movement work, is almost epic in concept, breadth and range.  Starting on ominous repeated notes on the cello over which the viola and violin vied for melodic supremacy, the harmonies were both daring and challenging, at one turn attempting to settle on traditional notions of sonority but immediately resisting the attempt at conforming by deviating and careering into untamed pastures.  The viola and the violin werein constant dialogic exchange, one that did not go to any resolution but was continually frustrated in the attempt by the intrusion of the cello. The second movement, marked lento provided a contrast to the succeeding two movements, an Allegro and a Presto respectively.  It consisted of almost impressionist, ethereal textures, floating unhindered, giving an impression of movement in a state of stasis.  Despite the final two movements being fast ones, yet the last one was decidedly more energetic and vibrant, while the Allegro movement betrayed moments of introspection and contemplation in-between the busy finger-work.

If any proof were needed at all, this last work tested the supreme mettle of Les Cordes Marines who, throughout their performance maintained a tonal colour that was almost sublime, never aggressive even in the more forceful moments, totally controlled yet seething with understated passion.  A memorable performance indeed! 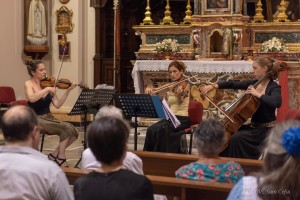 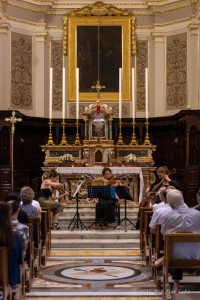 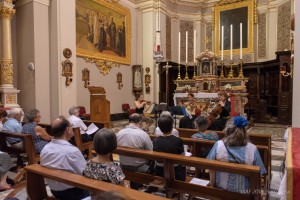