The Victoria International Arts Festival organizers, The Laudate Pueri Choir of St George’s Basilica, Victoria, has been officially invited by Mro Mgr Massimo Palombella, Director of the Cappella Musicale Pontificia ‘Sistina’ to sing together with the said Choir during the Solemn Mass presided by H.H. Pope Francis on the Solemnity of the Epiphany of Our Lord on January 6th 2014 at the Basilica of St Peter’s, at the Vatican in Rome. This signal honour bestowed on the Gozo choir is set within the context of recent similar invitations by the Cappella Pontificia ‘Sistina’ to world-class choirs such as the Westminster Abbey Choir and the Westminster Cathedral Choir.  For the historic occasion P.L. da Palestrina’s Surge, illuminare Hierusalem, for double choir, among other motets, is being sung. During its stay in Rome, the choir will be performing a recital of sacred a cappella motets ranging from the Renaissance Palestrina to the contemporary Joseph Vella at the Chiesa di Sant’Anna at the Vatican on Saturday 4th January. The recital is being accorded the distinguished patronage of the Pontificio Consiglio della Cultura headed by H.E. Cardinal Gianfranco Ravasi.  H.E. Cardinal Prospero Grech, guest of honour and patron, together with H.L. Mgr Mario Grech are honouring the prestigious event with their presence.  The choir will be under the direction of Rev. George Joseph Frendo. 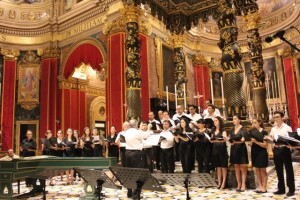