Comprised of Claudia Norz (Violin), Kate Conway (Viola da gamba) and Oliver John Ruthven (Harpsichord), this Trio exhibited flair, musical understanding and a superb rapport amongst them as an ensemble. Alternating works by Leclair and Rameau, this was French  Baroque music at its most glorious and refined. Given the vaunted French qualities of elegance and delicacy, the concert attested to this throughout, apart from the obvious manifestation of high-level and high-quality virtuosity from all the performers. Claudia Norz dazzled on the violin while Kate Conway was masterful on the viola da gamba. Oliver John Ruthven played sublimely and the harpsichord came out in all its rippling tonal quality and beauty under his lovely touch!

This was a truly successful run of Baroque concerts that took the audience on a guided tour, as it were, of the major styles prevalent all over Europe in the period. We hope to have more of this in future editions for this was without any doubt a very successful venture! 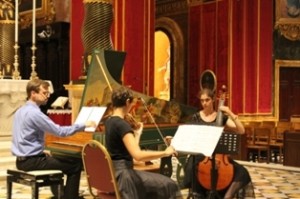 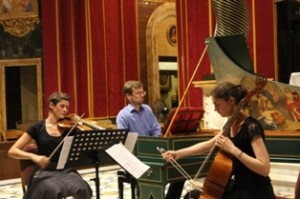