Last Monday saw the return of the Kalamus Trio, a chamber ensemble from Italy that specializes in the repertoire of the bassett horn – the precursor of the modern clarinet.

Performing to a most enthusiastic and interested audience, Kalamus Trio did not disappoint. Tackling the very difficult repertoire with panache and aplomb, they delivered a masterful execution that was as colourful as it was diverse. Added to the interest of the programme was the participation of Chinese mezzo-soprano Xu Jie, who specializes in late Baroque and early Classical opera. In fact, the programme was dedicated almost entirely to Mozart (with one exception) and the arias chosen by the mezzo were representative of the genius of the inimitable composer from Austria!

Starting off with the very well-known gem ‘Voi che sapete’, the mezzo soprano immediately made her mark as a most accomplished singer and musician. She sings with intelligence. Accompanied on the basset horns gave an aura of delicate authenticity and validity to the piece. This aria was pursued by another one from the same opera, namely, Le nozze di Figaro, this time‘Non so più cosa son, cosa faccio’. Other arias performed were ‘Batti, batti, o bel Masetto’ (Don Giovanni) and the final piece on the programme, ‘Deh, vieni non tardar’ (Le Nozze di Figaro). All were characterized by elegance and poise, with a well-rounded voice that was always under control. Phrasing was impressive and diction was also almost always clear and articulate.

The Kalamus Trio performed other ‘arias’ by Mozart, this time in instrumental transcriptions. This proved to be most interesting for while the lack of the vocal element was detrimental with regard to the text, yet, the mood and spirit were beautifully captured. Duetto Papageno (Magic Flute), ‘Là ci darem la mano’ (Don Giovanni), and Aria Madamina (Don Giovanni) were played with confidence and assurance. 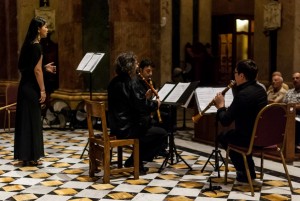 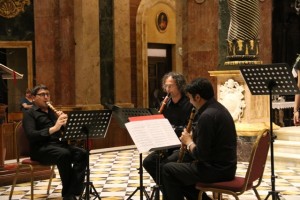 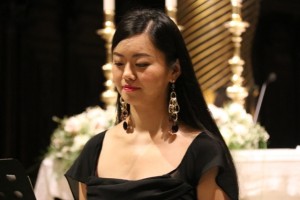