The last concert in the VIAF 2019 Baroque Series came to a lovely close with a duo concert by Jacob Portelli on the violin and Joanne Camilleri on the harpsichord.  Both versatile soloists in their own right (Jacob can play practically any string instrument in existence, including the harp, while Joanne is an accomplished professional pianist), these two excellent musicians got together to regale an enthusiastic audience with a concert of works by Handel, Rameau, Veracini, and Bach.

What was striking throughout their recital was the profound, almost natural, understanding and empathy that the two performers displayed. Theirs was compatibility that does not come easy — throughout there was mutual respect, with Joanne shouldering the onus of responsibility as both accompanist but not shying to come to the fore when it was her responsibility to do so.  In fact, the concert started with a solo performance of Handel’s Suite no. 4 in D Minor HWV437, which is in four movements, Allemande; Courante; Sarabande; Gigue, followed by another solo work, this time by Rameau in the form of L’Enharmonique (XIV) – L’Egypietienne (XV) and Les Sauvages (XIII) from Nouvelles Suites de Pièces de Clavecin.  It was impressive to note that Joanne managed to capture the subtle difference in style between the German and the French work, and her articulation and dexterity was nothing short of commendable.

Jacob and Joanne teamed up for Veracini’s Sonata for Violin and Harpsichord no. 1.  Originally for Flute, the version for Violin worked well.  The work starts with a Largo e nobile movement that spoke with a ponderous and grave voice.  The melodic interest is given to the violin and here one could sense the influence of Corelli and that of the Italian School.  The Allegro second movement was strongly rhythmic and attractive while the ensuing Largo once more was keen on highlighting the mellow singing tones of the violin.  It was reminiscent of a recitative that precedes and aria in Baroque opera, accompanied to the minimum on the harpsichord.  The final Allegro moved at a steady pace, and rounded up this lovely work, bringing it to a definitive close.  Throughout, the harpsichord was a partner in crime, as it were, rather than an accompanist, with extremely difficult passages and busy finger-work.  Jacob’s tone was well-rounded and pleasant, even in the extreme points of the tonal spectrum.

The last item on the programme was Bach’s Sonata in G Major for Violin and Harpsichord BWV1019.  This work is the last of six violin sonatas Bach wrote before 1725, most likely while he was Kapellmeister at Cöthen, and revised several years later.  Bach may have written them for Prince Leopold to perform, later revising them for his own performance at his Leipzig concerts.  Typical Baroque Sonatas for two instruments indicate that there were two contrapuntal solo lines plus a basso continuo. Bach combines the second solo voice and continuo into the keyboard part, making the keyboard more of a partner to the violin and utilizing the strengths of both instruments.

This Sonata differs from the other five in that it is comprised of five movements instead of fashionable four.  In its final version, an extra Allegro precedes the slow-fast-slow-fast structure of the rest of the Sonata.  As with other late Baroque Sonatas, each movement conveys a particular emotion, or Affekt.  The interpretation given by Jacob and Joanne allowed the opening, an Allegro, to emerge in a brilliant mood.  Smooth, flashy running lines in the violin and keyboard right hand fitted together closely.  The Largo, in E minor, was sorrowful with its singing violin melody supported by a more embellished keyboard countermelody. The third movement, a second Allegro and also in E minor, is for keyboard alone.  It displayed a pensive and somewhat sad mood, with writing similar to that of his Two-Part Inventions.  The fourth movement, Adagio, conveyed melancholy, “the singular spun out rhythms and the rich harmony of the movement border on the bizarre,” as Bukofzer puts it.  It began with the keyboard stating the slow, B minor melody followed by the violin, passing it back and forth throughout.  Syncopations made the listener wait breathlessly for resolution of the harmonies.  The last movement is a lively Allegro, based on a theme from the cantata Weichet nur, betrübte Schatten BWV 202. Back in G major, it is at turns bouncy and fluid, with quick trills attached to sixty-fourth notes and emphasis on the off-beats enlivening the movement.

This was a most fitting ending to a dazzling Baroque week that saw no fewer than 44 works by great masters ranging from Monteverdi to Bach to Rameau to Telemann and more. 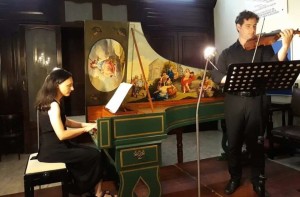 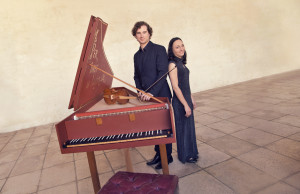 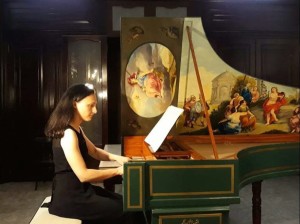