For Bach enthusiasts particularly and music lovers more generally, it’s difficult to conceive of a better way to spend the evening than listening to world-class cellist Daniel Veis and his wife Helena Veisová on the pianoforte in an all-Bach recital that all but stunned the audience with its splendour and excellence.

Tchaikovsky award winner Daniel Veis and his wife Helena are consummate artists. This, coupled with their utterly humble nature and easy-going way made it all the more a privilege for the organizers of VIAF who were hosting the couple for their 10th consecutive time in the Festival.  Completely unassuming and courteous to a fault, theirs is a greatness that is unique and rare.

Deciding on an all-Bach programme, given the great master’s 330th anniversary of his birth, the programme was a difficult one even for the audience. An all-Bach concert is demanding and challenging for both performers and audience and this was one such evening. It was intellectual, cerebral and intense from start to finish. Plunging straightaway into Sonata for Violoncello and Pianoforte no. 1 in G Major BWV1027, originally for viola da gamba and harpsichord, the performers displayed an extraordinary intellectual and emotional rapport that never wavered for a single proverbial rest. The strong movement-to-movement connection was most easily seen and heard in the way that the opening Adagio, in luxuriantly flowing 12/8 time, had no final cadence of its own but rather connected directly to the following Allegro via a half cadence (cunningly, the opening movement winds down to G minor, the major mode appearing only as the next movement begins.) Both these first two movements opened in the traditional imitative style of the Baroque Trio Sonata. A third of the way into the Allegro ma non tanto movement, Bach turns the melody upside down and proceeds to give it a new contrapuntal treatment; two-thirds of the way in, the original form of the subject returns over a dramatic dominant pedal.

As expected, far less energetic and outgoing was the languid Andante, whose ever-repeating sixteenth note mini-arpeggios and broken bass octaves covered a wide and colourfully chromatic harmonic distance in just 18 bars of music. A wonderful moment, radiant within the movement’s languid E minor tonality, was divinely achieved when Bach arrives at D major at the exact midpoint. Once the eighth notes of the final Allegro moderato began, they hardly ever came to a rest. Bach seemed to be thoroughly relishing his contrapuntal prowess here, even in the very first measure, when the opening gesture of the keyboard right hand is used, in inverted fashion, to initiate the bass line. Equally relishing the joy of this work were the performers themselves, the cellist adopting a full-bodied singing tone and the piano endlessly supporting with intelligent playing.

Next came one of the highlights not only of the evening but of the whole Festival, namely, with the performance of the monumental Suite for Violoncello solo in D Major BWV1012. Playing entirely from memory, Daniel Veis tackled this magnificent Suite, of almost 30minutes duration, with class, style, finesse and a technique that was well beyond impressive. Originally composed for a 5-string instrument is indication enough, if any were needed, that Bach meant something extraordinary to come out of this work.

The Prelude, in a steady triple metre, is the only place in the set where Bach employs the dynamic markings (forte and piano), to simulate the effect of a Vivaldi-style echo Sonata with its antiphonal effects: phrases calling, responding, and gradually growing and developing into a fast-moving and playful cadenza and an untroubled recapitulation. With each Suite, Bach continues his progression away from simple dance-like structural roots. Melodic leaps are introduced in the fourth Suite, chords in the Fifth suite, and a subtle mix of chords, leaps, and implied harmonies, which become as important as the melodies, in this Sixth suite. Indeed, this work comes close in its technical challenges to the polyphonic simulations that Bach creates in the Partitas and Sonatas for solo violin.

Joy takes many forms in this Suite, from the echo-Sonata textures of the Prelude to the stately grace and implied bass harmonies of the Allemande, the aristocratic tones of the Sarabande, and the homophonic march-like Courante. However, the most unusual movement that emerged during the evening’s performance must have been the double Gavotte, where the subsections call for wide chords and melody over a ground bass, almost resembling a hurdy-gurdy playing at a peasant celebration. Nothing like this would be heard again until Zoltán Kolály, the Hungarian composer, took up solo cello writing some 200 years later. The Gigue culminated this Suite, and this great cycle of Six Suites, with a paradoxical duet for solo cello, where the two interlocking voices gradually climbed the scale, ascending to a high climax and sweeping back down to finish. A truly cosmic performance and the thundering applause that greeted Prof. Veis at the end was testimony to his great achievement.

Two other Sonatas followed, first the one in D Major BWV1028 and finishing with the one in G Minor BWV1029. The former is Bach’s second sonata for viola da gamba and harpsichord. Like the first in G Major, it is laid out in sonata da chiesa format, four movements alternating slow and fast tempi. The short opening, performed as a languid Adagio, showed just how much Bach viewed the two instruments used here as partners, as it presented an arioso-like melody, but interweaves the melody parts on the violoncello and keyboard such that each is essential to the overall line. The two instruments renewed their partnership in the following Allegro, which featured a sprightly, busy melody organized in groups of four measures. Natural tension from the four-measure groups and lively rhythms gave an exuberant momentum to this movement.

An Andante followed, in contrasting style; at its opening, the keyboard temporarily subordinated itself to the violoncello, which presented a lilting Siciliano melody. This melody is reminiscent of some of Bach’s most famous arias in 6/8 or 12/8 time, such as the “Erbarme dich” from the St. Matthew’s Passion, for instance, both in its use of ascending minor sixths and its solemn, deeply-felt atmosphere. The recurring trills Bach puts in both instruments seem to tighten the screws of the emotions here, leading to a particularly extended, tense trill on the violoncello just before the movement’s end, which resolves in a long final note. Sunshine broke out in the final Allegro, which came across as a joyful double melody consisting of an upward-skipping figure on the violoncello and a lively sixteenth-note figure on the keyboard. The rhythms of this movement pressed forward breathlessly, and even the momentary turn to the minor mode in the B section could not repress the exuberance of the music-making here.

The final G Minor Sonata was a tour-de-force, both technically and musically. It is hard to ignore the echoes of the Third Brandenburg Concerto in the opening theme of the Sonata no. 3, and the keyboard’s accompaniment sounded like a stand-in for an absent orchestra, such is the massive and broad texture of the work. The two instruments tossed the theme back and forth, each accompanying the other, and in the lengthy B section of the first movement they took the theme on an adventurous, picturesque journey through some quite remote keys. The length of the journey was emphasized by an emphatic unison statement of the main theme when the A section returned to end the movement.

In the Adagio, dialogue between the violoncello and the keyboard gave way to a delicate interweaving, organic and essential to the music. The texture Bach uses through most of the cello sonatas, which has the keyboard’s left hand playing basso continuo and the right hand acting as a melody instrument, was especially clear here; the left hand played chords at an expansive tempo, while the right hand and the violoncello unfurled stately, richly decorated melodies. Bach also exploited the violoncello’s capacity to soar in a mellow way with great success, making this a warm, movingly tender Adagio. The Allegro is daringly structured. It introduces a stolid minor mode theme on the keyboard, then provides a much more interesting answer in the major mode and takes both themes down the path of development. Daniel and Helena tackled this last movement with verve and passion, making this a wonderful Baroque performance in all its colour and embellishment. Along the way, an ascending trill motive became increasingly important, and seemed almost to drive the music back to the minor mode in which it ended. The profusion of themes was handled with fluent skill, and the whole movement sounded even more unified for its diversity, in retrospect seeming pointed at its goal from the start. Sonata no. 3 is possibly the finest of Bach’s violoncello Sonatas and one of his many lesser-known masterpieces.

A seemingly endless applause greeted the final chord and the audience all but leapt out of their chairs with enthusiasm. A delightful short encore was given.

This was one performance that is not likely to be forgotten by anyone who had the privelge to respond to it! 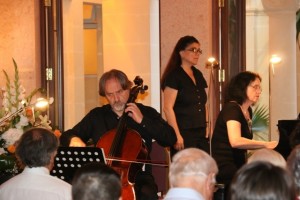 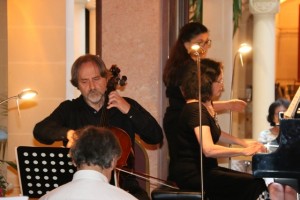 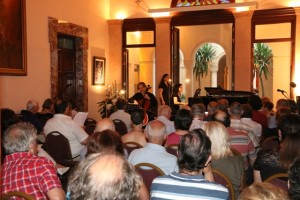 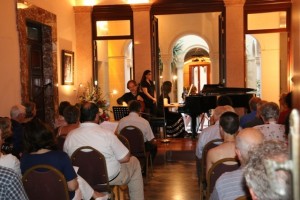 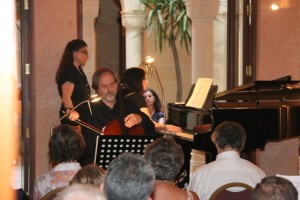 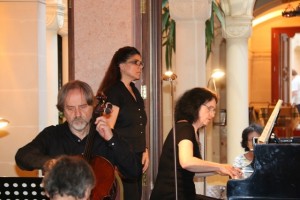 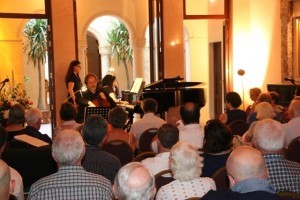