The much-awaited inauguration of a beautiful and historic square piano, which, given its historical importance has been placed at Il-Ħaġar – Heart of Gozo Museum, will be inaugurated tomorrow morning on site at 10.30am.

Square Pianos are an important part of musical history.  They were used by the great pianists of the late eighteenth- and early nineteenth-century as well as by the average citizens.  When properly restored and reconditioned, they can still function nicely and sound wonderfully authentic.  In musical literature, one comes across it under different names, most notably as Square Piano, Square Grand Piano, or Box Piano.  Its roots date back to the early pianofortes produced in Europe during the latter part of the eighteenth century.  Prior to that, its ancestor was the Clavichord.  Square Pianos produce a softer sound than we are accustomed to hearing from the modern Grand Piano, making them more suitable for an intimate, personal, salon setting.

Joseph Vella bought this square piano, made by the German firm Meyer, at an auction in Floriana many years ago, as a historic instrument.  He donated it to Il-Ħaġar – Heart of Gozo Museum, who have now fully restored and reconditioned it at the hands of Mr Anthony Spiteri.  It is now fully functional and, most probably, it is the only such instrument on the islands.

Prof. Vella will give a brief introduction, after which Francis James Camilleri will play a few pieces by Scarlatti, Mozart, and Beethoven on the newly-reconditioned instrument.

After the inauguration, a fund-raising lunch will be held at St George’s Basilica.  This will help defray some of the hefty costs that were incurred in the restoration process.  Please get in touch with one of the VIAF organisers to book.  Places are limited, so get in touch quickly! 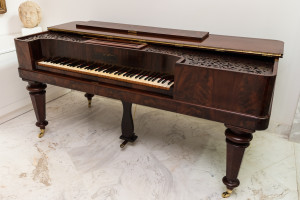