On Monday 20th June, Victoria International Arts Festival presented two concerts, one of which was a lunchtime one given by the prestigious Magdalene College Chapel Choir, Cambridge, under the direction of Jonathan Hellyer Jones, who is Precenter and College Organist.

University choirs in England have a solid and firm tradition of the finest of choral singing. The style and voice quality differ markedly from the Mediterranean mode and it is this contrast that gives an added dimension to the audience’s appreciation of some wonderful music-making. Magdalene College is a venerable institution, one that is steeped in history, culture, and tradition.  The choir is made up of current students and the obligations towards the church services are rigorous and plenty. The concert featured some well-known works and others not so well-known. The choir sang the first part of their concert a cappella and here, the homogeneity of the sound, the impressive pitch, and scrupulous attention to details of phrasing and dynamics came to the fore.  These qualities were sustained throughout, and, indeed, Byrd’s ‘Sacerdotes Domini’, Mendelssohn’s ‘Am Himmelfahstage’, Stanford’s most evocative ‘Beati quorum via’, and Joseph Vella’s ‘Jesu dulcis memoria’ had all the hallmarks of refined and sophisticated singing.

Three more motets followed after an organ interlude ably performed by Polina Sosnina. These were twentieth-century works, namely, Rutter’s ‘God be in my head’, Bruckner’s ‘Ave Maria’, and Britten’s ‘Hymn to the Virgin’.  The audience was particularly struck by the impeccable, direct high notes sung by the sopranos in the Bruckner’s piece, which never wobbled or faltered.  Organist Jonathan Hellyer Jones showed his mastery and command over the organ with the Finale from Guilmant’s Sonata no. 1 in D Major op. 42, a performance that attested to the organist’s incredible technique and musical understanding of the piece. 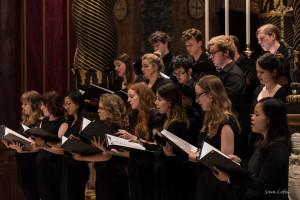 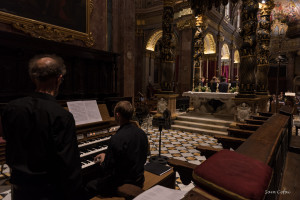 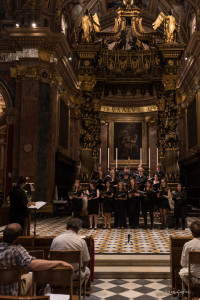